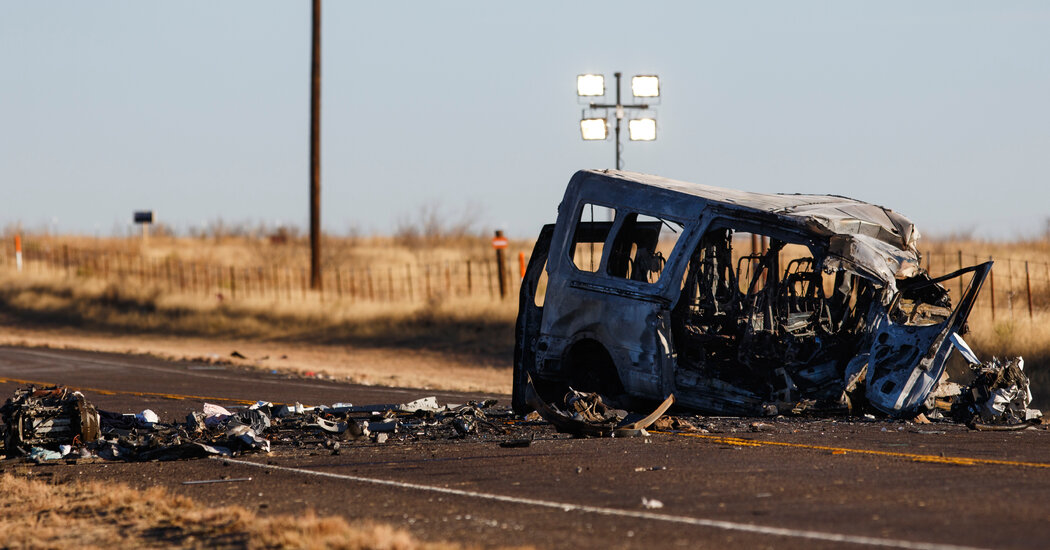 A 13-year-old boy was behind the wheel of a pickup truck that struck a van in Texas on Tuesday night in a collision that killed nine people, including a college golf coach and six of his players, along with the boy and a man traveling with him, officials said on Thursday.

Bruce Landsberg, vice chairman of the National Transportation Safety Board, said at a news conference that the truck’s left front tire was a spare that had blown out before the truck veered into the lane the golf team’s van was traveling in and struck the van head-on. It was unclear at what speeds the vehicles were traveling, but Mr. Landsberg noted that the speed limit in the area is 75 miles per hour.

“It was very clearly a high-speed, head-on collision between two heavy vehicles,” he said. “There is no question about the force of impact.” Both vehicles went up in flames in the collision near Andrews, Texas, about 50 miles east of the state line with New Mexico.

It was unclear why the 13-year-old boy, whose name was not released by the authorities on Thursday, was driving the truck. Henrich Siemens, 38, of Seminole County, Texas, who was also in the truck, was killed in the collision, the authorities said.

The University of the Southwest identified the victims from that institution as Tyler James, 26, the coach, and the student-athletes Travis Garcia, Karisa Raines, Mauricio Sanchez, Tiago Sousa, Laci Stone and Jackson Zinn. Most of the golfers were freshmen at the university, a private, Christian institution in Hobbs, N.M., near the state line with Texas.

Two golf players who were in the van, Dayton Price and Hayden Underhill, were critically injured but survived the crash, and they were undergoing medical treatment in Lubbock, Texas, on Thursday, a spokesman for the university said at a news conference.

Ryan Tipton, provost of University of the Southwest, said on Thursday that both players were “making steady progress.”

“One of the students is eating chicken soup,” Mr. Tipton said. “Every day it’s a game of inches. There is no indication of how long it’s going to take, but they are both stable and recovering and every day making more progress.”

In Texas, 14-year-olds can begin a classroom phase of a driver’s education course, but they cannot apply for a learner’s license until they are 15, according to the Texas Department of Public Safety.

In a statement on Wednesday, Gov. Greg Abbott of Texas said state officials were helping to investigate the collision.

“We grieve with the loved ones of the individuals whose lives were horrifically taken too soon in this fatal vehicle crash near Andrews last night,” Mr. Abbott said.

Gov. Michelle Lujan Grisham of New Mexico said on Wednesday that she was “deeply saddened” by the news.

“This is a terrible, tragic accident,” she said.