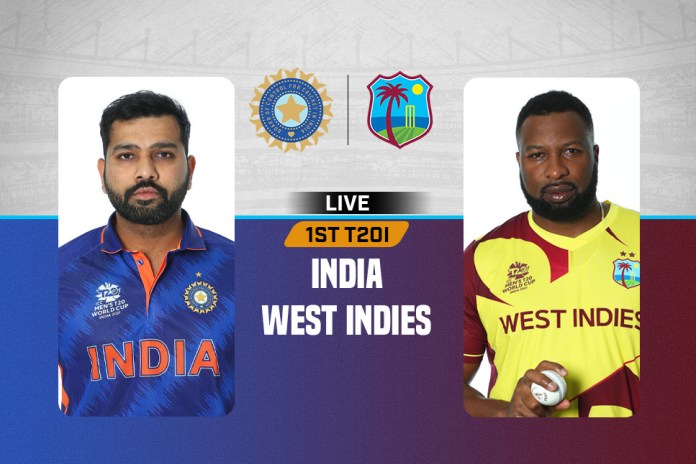 IND vs WI LIVE score, 1st T20I: Rohit Sharma-led India eyes to clear loopholes- Team India will be looking to get back things right on track in the built-up to T20 World Cup. The focus will be on middle-order as India look to get the right combination for the T20Is. Follow India vs West Indies LIVE score updates on InsideSport.IN

IND vs WI LIVE: Rohit Sharma plays BIG BROTHER to Virat Kohli, says ‘LEAVE him alone for sometime, he will be fine’

Just the other day at the IPL mega auction, wicketkeeper-batter Ishan Kishan hit the jackpot by landing a Rs 15.25 crore deal with Rohit’s franchise Mumbai Indians.

First up would be the opening combination and who would be ideal to partner the skipper in the shortest format with his regular KL Rahul out with a left hamstring strain.

Ishan opened in the first match of their preceding three-match ODI series against the Caribbean team in Ahmedabad but the skipper also tried out Rishabh Pant and Shikhar Dhawan.

While Ishan may be the preferred choice, Rohit also has options in Maharashtra run machine Ruturaj Gaikwad who has been in red hot form but has only been warming the bench.

Then there is Venkatesh Iyer, the KKR all-rounder who shot to prominence in the UAE leg of the last IPL as a big-hitting opener with 320 runs at an average of 40 and a strike rate of 125. He was just behind Gaikwad who had more runs (407) in this period.

It will also be interesting if Virat Kohli comes out to open with Rohit to get among runs as he’s been dealing with a lean patch.

His last International century came at this very venue way back in November 2019 in the pink ball day/night Test against Bangladesh.

India have a packed white ball calendar in the run up to their T20I World Cup opener against Pakistan on October 23.

So, it would not be a bad ploy for the think tank to give some much deserved rest to the dashing Pant as Ishan seems to be a confirmed selection in the side.

This will help Rohit try out both Shreyas Iyer and Surkyakumar Yadav in the same XI. The duo was in fine form in the recently concluded ODI series.

Suryakumar was the top scorer in the ODI series with 104 runs at an average of 52.00, while Iyer scored a match-winning 80 in their 3-0 series sweeping win in the third ODI.

India also have some exciting options lower down the order with the likes of Shardul Thakur, Deepak Chahar and Harshal Patel.

Patel impressed with a fine cameo of 11-ball 18 to prop up India’s total to a match-winning 184/7 from 140/6 in his only outing in the series against New Zealand just after the World Cup.

Bishnoi will fancy his chances

Fresh from a stupendous comeback series in the ODIs, Yuzvendra Chahal will be India’s regular spin option but it remains to be seen if exciting Rajasthan leg-spinner Ravi Bishnoi gets a maiden call up.

He was rewarded after an impressive run in the IPL and domestic circuit to be selected for the series.

With Washington Sundar ruled out of the series with a hamstring injury, it remains to be seen if the youngster from Jodhpur will get his maiden International cap.

Unlike their flop show in the ODI series, the Kieron Pollard-led West Indies would look to give a strong fight to the hosts in their favourite T20 format.

Boasting of T20 specialists, the Windies came here after beating England 3-2 at home in a thrilling five-match series.

They bat deep and with some aggressive hitters, the West Indies will hope to give India a tough fight.

Jason Holder has been in fine form for them and took four wickets in four balls in the final ODI against England to return with career-best figures of 5/27.

With some exciting all-round options in Odean Smith and Akeal Hosein, Pollard’s men would look to make it count at a venue where they won the T20 World Cup in 2016.
Dew factor, a concern?

With the chill in the air, dew can be a concern for both the teams at the Eden.

The CAB has kept four pitches ready for the three matches to be played in five days.

IND vs WI T20 Series: From Odean Smith to Nicholas Pooran, 5 West Indies players who made it big at mega auction – Check out

For more sports news and India vs West Indies LIVE score updates, follow us at InsideSport.IN