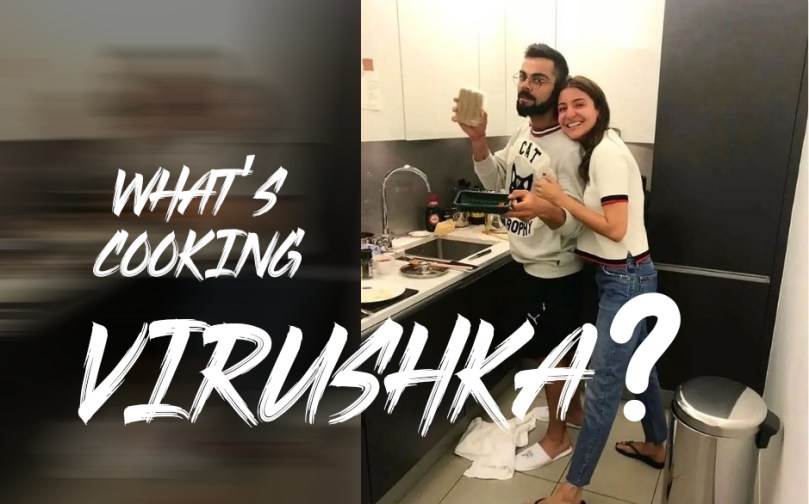 VIRAT-ANUSHKA COOKING:Virat cooks for Anushka – Former Indian skipper Virat Kohli is in a complete ‘husband’ mode right now. Wife Anushka Sharma couldn’t have asked for anything else. Kohli, the man of her dreams, just like a loyal husband is doing everything to keep that smile on her face. The latest post from the power couple proves once again, how much Virat spending time with his wife Anushka, and most importantly keep her happy. Follow IND vs NZ LIVE & India Cricket LIVE Updates with InsideSport.IN

The photograph is clicked reportedly inside the power couple’s apartment in Mumbai. Anushka Sharma is all smiles and can be seen wearing a white T-shirt to go with blue jeans. It seems that hubby Virat had just finished his meal, and was gulping down some water, before this click caught him by surprise. The man who can achieve the impossible on the cricket pitch, is doing everything in his powers to prove that he is a valuable life partner. Given the shortened amount of time, international cricketers get from their busy schedule to spend with their family, Virat Kohli is certainly making it up to wife Anushka.

Netizens showered their love on both Virat Kohli and Anushka Sharma. The celebrity couple continues to raise the bar, and set couple goals for the rest to follow.

Well, as far as cooking goes, Anushka Sharma knows a thing or two about it for sure. Earlier this year, Anushka was seen cooking PAV BHAJI for her daughter Vamika, inside her home kitchen. Watch the video below:

Other than cooking, both Virat and Anushka have a love for travelling. It is no secret that the power couple likes to travel and explore new places. Recently, they were recently spotted in Uttarakhand.

Recent pictures of Virat Kohli and Anushka Sharma travelling like locals in Uttarakhand has sent the fans into frenzy. Virushka spent some relaxed moments at an ashram in Uttarakhand. Their fans also managed to get some pictures alongside them in Kakdi Ghat, Nainital. The ace cricketer was seen in a relaxed mode and also interacted with the fans.

Virat gears up for Bangladesh Tour

On the work front, Virat Kohli who skipped the tour to New Zealand will be next seen on the national duty in the upcoming tour to Bangladesh. India will play 3 ODIs and 2 Tests against Bangladesh, and the tour will kick-off from December 04. After the much-needed break, Virat Kohli fans will be expecting some massive scores from his bat. He ended the ICC T20 World Cup 2022 as the leading run-getter and the fans would like him to continue his golden run with the bat against Bangla Tigers.