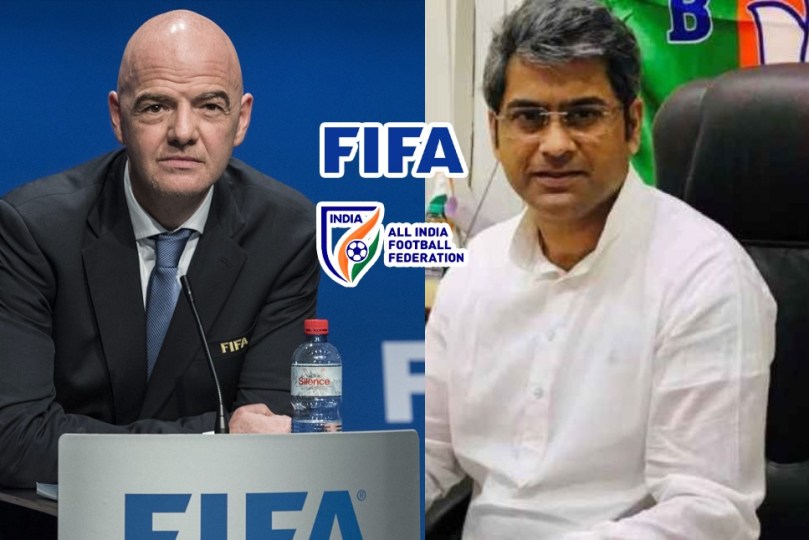 The All India Football Federation’s (AIFF) top two officials, including newly appointed president Kalyan Chaubey, held an “encouraging and constructive” discussion on Indian football with FIFA chief Gianni Infantino on Friday. Chaubey, a former goalkeeper who has represented both Mohun Bagan and East Bengal in his playing days, was accompanied by the national federation’s new secretary general Shaji Prabhakaran.

Discussions were held on key aspects of development of #IndianFootball, and areas that require priority focus. pic.twitter.com/itKVxZ4mEw

AIFF President Mr. Kalyan Chaubey and Secretary General Dr. Shaji Prabhakaran called upon FIFA President Mr. Gianni Infantino at the FIFA Office in Doha, Qatar on Friday, Sept 9, 2022. “They had an encouraging and constructive meeting with the FIFA President on the future development of Indian Football,” the AIFF said in a statement.

“Discussions were held on key aspects of development of Indian football, and areas that require priority focus.” Infantino confirmed he will visit India in the near future, it said. “All the possible high-impact projects and programmes concerning Indian football will be finalised before the FIFA President’s visit to India,” the national federation said in the statement.

The duo will meet the head of the global football body following an invitation from the Qatar Football Association (QFA). It has been understood that the two parties are scheduled to discuss about the future roadmap of Indian football.

“I will meet Infantino in Doha. The QFA has invited us to watch a match on Thursday. The Fifa chief is also expected to be present,” Chaubey told The Telegraph on Thursday.

Kalyan Chaubey along with Shaji Prabhakaran will witness a game between Saudi champions Al Hilal SFC and Egypt’s Zamalek SC at the famous Lusail Stadium. The Lusail Stadium will not only hosts quite a number of FIFA 2022 World Cup matches but will also host the grand final scheduled to take place on 18th December.

🚨 | AIFF President Kalyan Chaubey and secretary-general Shaji Prabhakaran are expected to fly out to Qatari capital Doha in the early hours of Friday (today) on an invitation from the Qatar Football Association. [TTI] #IndianFootball pic.twitter.com/1ap1sujNYh

“Discussions will be on improvement of Indian football where Qatar can play a role,” Chaubey said. It is also understood that the AIFF delegates will have a meeting scheduled with Hamad Bin Khalifa Bin Ahmad Al Thani, the President of the QFA. Talks are likely to be about how Qatar can play a key role in the development of India Football.

Earlier when Chaubey won the AIFF elections on 2nd September, FIFA President Gianni Infantino called Chaubey to congratulate him and asked to have a meeting with him. The AIFF President held a press conference in Kolkata on 8th September where he proposed some of the short-term plans for Indian Football.