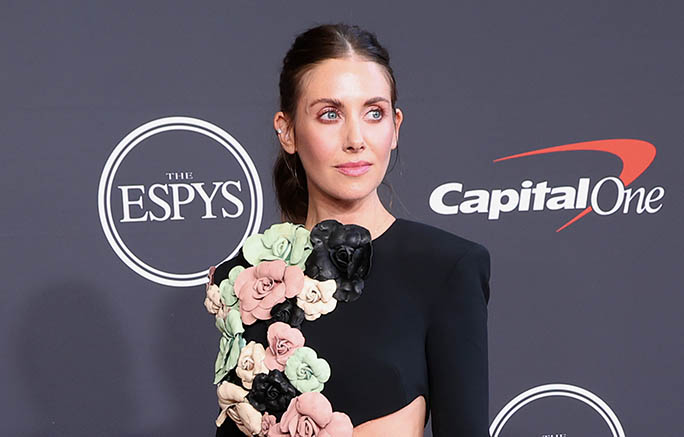 The 2022 ESPYS are in full swing tonight at the Dolby Theatre in Hollywood, Calif. And just as expected several celebrities and sports star bringing their fashion A-game to the red carpet.

Alison Brie was among the many faces to arrive on the red carpet. Instead of a traditional little black dress or glittering gown, the “GLOW” actress made an edgy style statement in a two-piece ensemble. Brie wore a black long-sleeve crop top, which featured a curved hemline and was decorated with bold pink, black, green and cream flowers.

The “Get Hard” star complemented the garment with a mini skirt that included the same floral details as her top. The skirt also had risky cutouts alongside the side.

Brie completed her look with sheer tights and peep-toe platform sandals. The patent leather syle had a chunky outsole and were set on a 6-inch block heel. Post-pandemic, platform shoes have emerged as one of the most popular footwear styles. The dramatic heel easily adds flair to any outfit.

The ESPYS, or the Excellence in Sports Performance Yearly Awards, is an annual ESPN award show celebrating outstanding achievements in sports. This year’s show will be hosted by NBA superstar Stephen Curry, with award recipients selected by sportswriters, broadcasters, sports executives, and players as well as fan voting. The biggest awards of the night are Best Men’s Sport Athlete and Best Women’s Sport Athlete, along with Breakthrough Athlete and Best Record-Breaking Performance.

PHOTOS: Click through the gallery to see more sports stars and celebrity arrivals at the 2022 ESPYS.