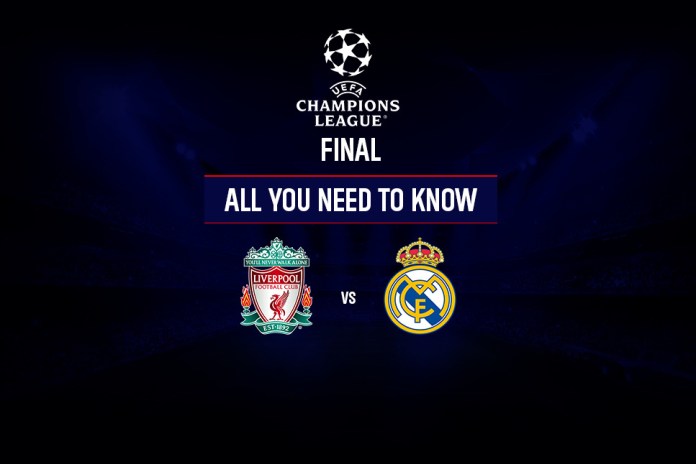 Champions League FINAL 2022 – All you need to know, Liverpool vs Real Madrid: After seeing 80 sides from 54 associations take part in elite European competition this year, only one can get their hands on the ultimate prize. Liverpool are looking for European title number seven and also seek revenge on the 2018 UCL Final against Los Blancos. Real Madrid are pursuing a 14th Champions League triumph. Follow Champions League live updates on InsideSport.IN.

That Champions League Final, Liverpool vs Real Madrid will take place on Sunday, 29th May kick-off at 12:30 AM IST and Saturday, May 28 kick-off at 8pm BST/3pm ET.

Which teams are in the 2022 Champions League final?

We will witness Liverpool vs Real Madrid in the 2022 Champions League final.

How can I watch the 2022 Champions League final on TV & live stream in India?

In the UK, BT Sport once again has exclusive broadcast rights for the Champions League in 2021-22.

The final will be shown across its television channels on BT Sport 1 and Ultimate, while also being made available to stream on the BT Sport app.

In previous years, the Champions League final has been made available to watch for free on the BT Sport YouTube channel.

For those in the United States, the cream of the European crop can be caught in action on CBS in English and Univision in Spanish. Matches can be streamed in America on Paramount+.

How can I buy tickets for the 2022 Champions League final?

Of the 75,000 tickets up for grabs, UEFA has announced that 52,000 will be made available to supporters and the general public.

The two teams that reach the final will each receive an allocation of 20,000, with 12,000 tickets being offered for sale to fans across the globe.

Each of the finalists will give away 10,000 tickets free of charge to followers of their club, with European football’s governing body eager to “reward the lifeblood of the game for their loyal support during the pandemic”.

Tickets available through UEFA’s official portal will not be sold on a first come, first served basis, with a ballot being put in place that needs to be registered for when applying.

The UEFA Champions League Final 2022, Liverpool vs Real Madrid will be played at Stade de France in Paris

The final was originally scheduled to take place in Bayern Munich’s Allianz Arena. Following to the COVID-19 pandemic, however, the 2020 and 2021 finals were relocated to Portugal, and the final hosts were shifted back a year.

As a result, this year’s final was due to take place at the original host of the 2021 final, Zenit Saint Petersburg’s Gazprom Arena, with the Allianz Arena to host the showpiece event in 2023.

But after Russia’s invasion of Ukraine, UEFA decided in February to move to the final again this time to the Stade de France in Paris. The 80,000-seater stadium hosted the Champions League final in 2000 and 2006, as well as the finals of Euro 2016 and the 1998 World Cup.

Liverpool’s Road to the FINAL

Winning all six of their group matches earmarked Liverpool as an early favourite for the Champions League title.

They were then paired with Inter Milan in the last-16, where a 2-0 win at San Siro in the first leg saw them through despite a 1-0 defeat at Anfield the only match Jurgen Klopp’s side have lost in this season’s competition.

Liverpool then dismantled Benfica 3-1 in Lisbon in the first leg of their quarter-final, which was followed by a 3-3 home draw, made to look more uncomfortable than it was in reality due to two late goals from the Portuguese side.

Unai Emery’s Villarreal awaited Liverpool in the semi-finals, a tie which appeared foregone after an impressive 2-0 home victory in the first leg. Two first-half goals from Villarreal in the return fixture then jolted Liverpool into life, who secured their place in the final with three goals of their own after the break.

Real Madrid’s Road to the FINAL

Real Madrid’s Champions League journey at the Santiago Bernabeu began in an embarrassing fashion as they lost 2-1 at home to Moldovan champions FC Sheriff in their second group match, a result that stunned the competition.

That seemed to spur Ancelotti’s side on, however, as they won all their remaining group games to finish top of Group D only to then be drawn against Paris Saint-Germain in a heavyweight round of 16 tie.

Real Madrid lost the first leg in Paris 1-0 and then conceded just before half-time in the return fixture at the Bernabeu. Just as it looked as though they were down and out, a sensational second-half hat-trick from captain Karim Benzema secured a place in the quarter-finals.

There, they met Chelsea, who had defeated them in the semi-finals of last season’s competition. Madrid looked to have vanquished those demons, having won 3-1 in the first leg in west London.

Ancelotti’s side were stunned at the Bernabeu, though, as Chelsea went 3-0 up with 15 minutes left to play. Madrid then turned the tie on its head, with a Rodrygo volley sending the game to extra time and Benzema scoring the winner shortly after the restart.

That set up the semi-final against Manchester City — a tie that will be remembered as an all-time Champions League classic for the drama that ensued over the two legs.

City won 4-3 at the Etihad and then went 1-0 up late on in the second leg, but two late goals from Rodrygo levelled the tie at 5-5 on aggregate. Once again, Benzema was the hero for Real Madrid, scoring from the spot in extra time.

These sides met in the 2018 Champions League final, a game which saw Liverpool talisman Mohamed Salah taken off injured in the first half after a challenge from Real Madrid captain Sergio Ramos.

Liverpool were unhappy about the strength of that challenge, and went on to lose the game 3-1. They then came up against each other in last season’s quarter-finals, with Madrid winning the first leg 3-1 at home, followed by a goalless draw at Anfield.

After Liverpool had beaten Villarreal but before Madrid had overcome City, Salah was asked who he’d rather face in the final.

“Yeah, I want to play Madrid,” was his response and he also took to social media saying ” We have a score to settle.”

Who will be the Match Official for the Champions League Final? – Referee

The UEFA Referees Committee has appointed Clément Turpin to referee the 2022 UEFA Champions League final between Liverpool and Real Madrid.

Did you know?
Madrid have reached the European Cup final for the 17th time this season, six more than any other club. They have won their last seven finals in this competition and, of course, their total of 13 titles is unsurpassed.