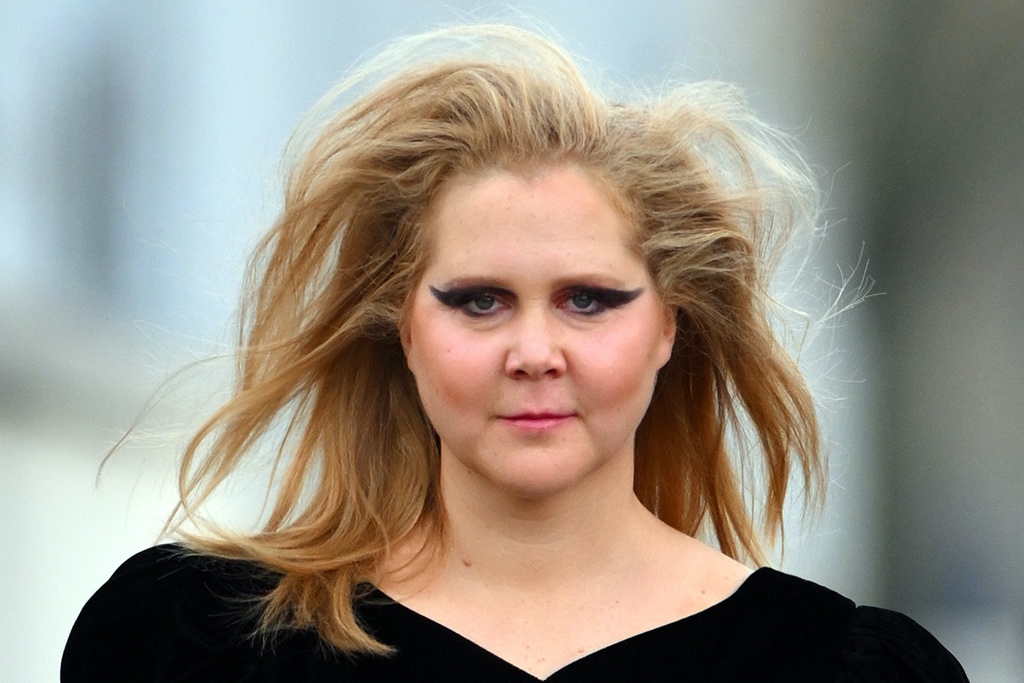 Amy Schumer looked straight out of the ’80s while filming her comedy sketch show, “Inside Amy Schumer,” in New York on Thursday afternoon. The show is continuing to film multiple specials for Paramount+, following a five-year-long hiatus since ending in 2016.

The “Trainwreck” actress was spotted in New York wearing a retro knee-length dress, featuring a black velvet top with an angular neckline and padded shoulders. The short-sleeved number included a shiny gold waistband, as well as a printed gold and black skirt. Schumer paired the piece with sheer matching tights, as well as dark eye makeup and blown-back hair.

When it came to shoes, Schumer went classic in a pair of black pumps. The “Life and Beth” star’s footwear included a pointed-toe silhouette with stiletto heels totaling at least 3 inches in height. With a velvet texture, the pair also coordinated smoothly with her ensemble to create a coordinated, streamlined effect.

Schumer wore a variety of ensembles throughout the day, including a ’60s-inspired cardigan and skirt, a multicolored 3D floral dress and printed ’80s tracksuit — all with black or white sneakers.

The “Snatched” actress‘ pumps were a sharp wardrobe inclusion, as the style has regained popularity during the current high heel renaissance. The style often features triangular toes and thin heels, as seen in new Amina Muaddi, The Attico and Le Silla pairs worn by Rihanna, Diane Kruger and Yara Shahdi in recent weeks.

When it comes to shoes, Schumer’s style varies between casual and sleek. On the red carpet, the actress favors pointed-toe pumps in metallic and neutral tones. While off-duty, however, she’s been spotted in similarly versatile sneakers.

Discover Schumer’s top shoe moments on “Inside Amy Schumer” in the gallery.