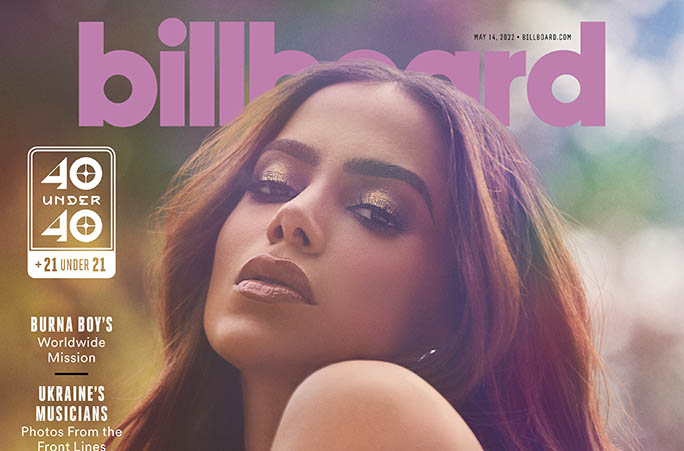 Billboard has released its first of two covers celebrating its inaugural MusicCon event, the past year in entertainment and what artists, trends, and songs will dominate the music landscape in the year to come.

Anitta graces the first cover of the dual-issue. The international superstar will serve as the keynote speaker for the “From Brazil to the World” panel during Billboard’s first-ever MusicCon as well as perform a headlining set at AREA 15 in Las Vegas on May 13. Snoop Dogg, Saweetie and Diplo will also hit the stage.

The Brazilian singer stayed true to her sultry spirit and vibrant aesthetic for the new issue. Anitta served up some serious style in a variety of outfits. On the actual cover, the entertainer poses in a sparkling Alexander Vauthier couture gown. Another photo shows her standing amongst a tropical setting in a light blue Gucci suit. The outfit consisted of a structured blazer and baggy wide-leg trousers. Although her footwear is not visible in the photo, Billboard confirmed that she finished off her look with a pair of Versace shoes.

Lastly, the “Boys Don’t Cry” hitmaker slipped into a shimmering Bronx and Banco dress. The one-shoulder garment had a wide cutout near the hip, slits along the bodice and ruched detailing throughout.

In the new issue, Anitta opens up about staying true to Brazilian music and the kind of example she wants to set for example in her country.

“For them to believe it’s possible, they need to see that someone did it first. I want to be able to make a difference in other shit, not only in music. It’s about how women will be treated in their jobs, about how society will act, how they will vote,” the pop star said.

See how high heels have evolved through the years.