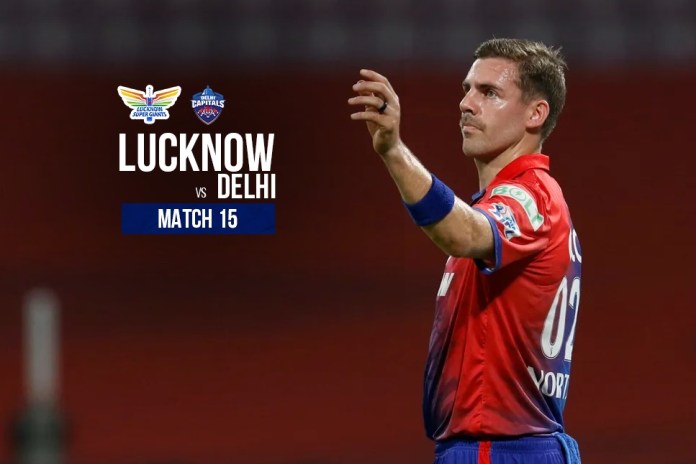 LSG vs DC LIVE: Anrich Nortje’s return to action after a three month lay-off due to a hip injury has gone horribly wrong. Playing his first match of the season for Delhi Capitals against Lucknow Super Giants, the South African speedster bowled two beamers and was taken out of the attack. Follow InsideSport.IN for more updates

What was that? Not a great comeback, firstly for Warner, now for Anrich Nortje.#LSGvsDC pic.twitter.com/SOhN8Ef1cp

After Delhi Capitals set just 150 as target, the pressure was on Delhi bowlers to defend the total. The incident happened when Nortje was bowling his third over in the innings. Having already bowled a full toss to the face of Quinton de Kock in the earlier over, which was smashed for a six, Nortje once again bowled a beamer to Deepak Hooda in the third ball of the 16th over. Though the batsman was caught at extra cover, the ball was above his waist and it was deemed a no-ball with Nortje taken out of the attack.

Kuldeep Yadav was soon called upon by Rishabh Pant to complete the over. Nortje was already struggling in the innings as he was smashed for 19 runs in the very first over that he bowled. He was introduced to the attack to bowl the fifth over of the innings and his compatriot Quinton de Kock, welcomed him by smashing three consecutive boundaries in the first three balls. Another short ball from Nortje was pulled towards deep-midwicket for a six.

Anrich Nortje, who last played a competitive match during the T20 World Cup in November, joined the Delhi Capitals camp even before achieving full fitness. He missed the first two games for the side and continued his recovery. Ahead of this contest against Lucknow Super Giants, he was deemed fully fit and was named in the palying XI, replacing Khaleel Ahmed.