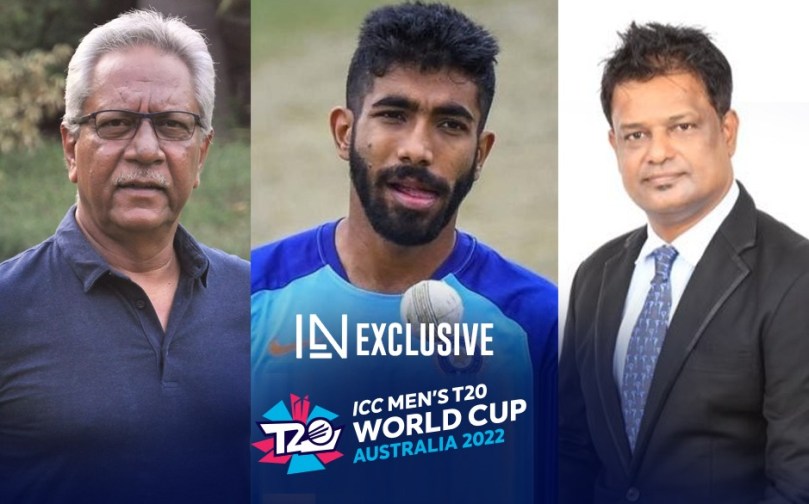 Jasprit Bumrah Injury: Three weeks ahead of the T20 World Cup, Team India have received bad news. Key speedster Jasprit Bumrah has been ruled of the ICC event, which starts next month in Australia. Former Indian cricketers Anshuman Gaekwad and Dodda Ganesh believes the unavailability of Bumrah is going to be a miss for India in the World Cup. Follow T20 WC live updates with InsideSport.IN

It is a big concern for India now. The pacer department was looking at Bumrah as their key pacer. When fit, he is one of the best in the world.

Jasprit Bumrah Injury: Ex-players Anshuman Gaekwad & Dodda Ganesh declare, ‘Bumrah ruled out of T20 World Cup is a big blow, his experience and quality will be missed in Australia’

Gaekwad believes that Bumrah’s experience is going to be missed immensely. With the T20 World Cup in Australia, the 28-year-old would have been a huge asset. At present, there is no one like Bumrah in India’s set up. Bumrah has been the go to bowler for India when they needed wickets. All of this will be missed in Australia.

“It is an expensive miss head into the T20 World Cup. Now, India is surely going to miss the pace and his abundance of experience in the pace wickets of Australia, especially. He is a unique bowler. In cricket, there is no one, who cannot be replaced. But looking at the performance and experience, you do not have anyone with the top quality and the experience in the Indian team as of now,” Gaekwad told InsideSport.IN.

Jasprit Bumrah complained of back pain during India’s practice session on Tuesday. The BCCI Medical Team assessed him. He is ruled out of the first #INDvSA T20I.#TeamIndia

The Indian pacer did not feature in the West Indies tour and the Asia Cup due to the same back problem. He was back at the NCA for treatment. And Bumrah was deemed fit enough and recovered from the injury to be picked for the T20 World Cup.

However, things have not gone according to plan. Bumrah, who returned in the Australia T20 series recently, did not play in the first T20 against South Africa. Initially, it was thought to be a precautionary action due to back pain. But now, it has been learned that the player has suffered a back stress fracture.

After this big blow to India, Ganesh wants Shami to be included in the T20 World main 15. The latter, who recently contracted Covid, was one of the stand byes for Australia. As it seems, Shami is the best alternative for India.

“That is a big blow for Team India. We have many bowlers, but they are not of that level as that of others. With Bumrah, he is India’s trump card and a champion bowler. With the T20 World Cup in Australia, he is going to be a big miss as  he is India ‘s strike bowler. Before the World Cup, this is a big shock. The team management should consider Shami in the main 15 as experience is needed in Australia,” Ganesh said.

Jasprit Bumrah Injury: Ex-players Anshuman Gaekwad & Dodda Ganesh declare, ‘Bumrah ruled out of T20 World Cup is a big blow, his experience and quality will be missed in Australia’