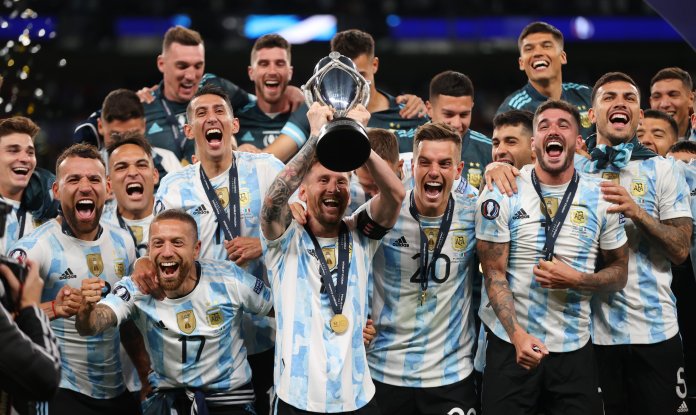 A brilliant intervention by Cristian Romero had earlier denied Andrea Belotti a simple finish in the 20th minute, with the striker then seeing a looping header saved by Emiliano Martinez a few moments later.

But Argentina soon took charge. Messi wonderfully turned away from Giovanni Di Lorenzo and held him off before passing across goal for Martinez to tap home.

The Inter forward then turned provider on the stroke of half-time, spinning Leonardo Bonucci and feeding Di Maria, who lifted an audacious chip over the helpless Gianluigi Donnarumma.

Roberto Mancini made three changes at the break but if anything Argentina only became more dominant – Donnarumma desperately scurried back to stop a Bonucci back-pass going in, before importantly denying the excellent Di Maria twice.

Giovani Lo Celso then missed an open goal – albeit from a slightly tight angle – after great work by Messi, who subsequently tested Donnarumma twice.

But Donnarumma was eventually beaten again at the end, substitute Dybala finding the bottom-right corner after a solo Messi run terrified the Italy defence.