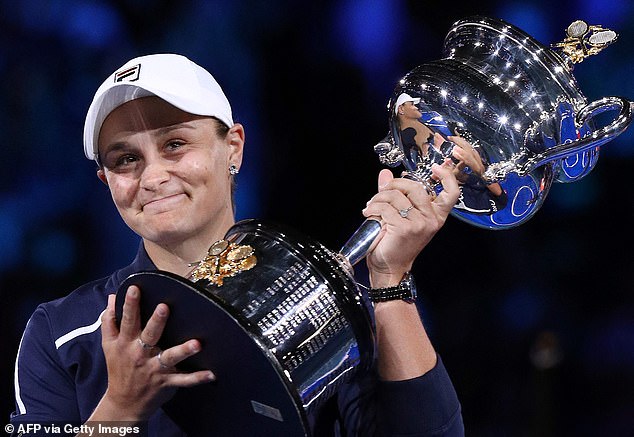 Ash Barty has shut down a persistent reporter trying to get the bottom of the reason behind the tennis champion’s shock retirement.

The women’s world No.1 announced on Wednesday she’d be pulling the plug on her incredible career, six months after claiming the Wimbledon title last year.

The 25-year-old said she had nothing left in the tank and had no regrets about her time on the court but knew it was time to ‘put the rackets down’.

When asked what she was planning next, Barty made it clear she would not be giving anything away.

Ash Barty announced her shock retirement on Wednesday. She is currently the world no.1 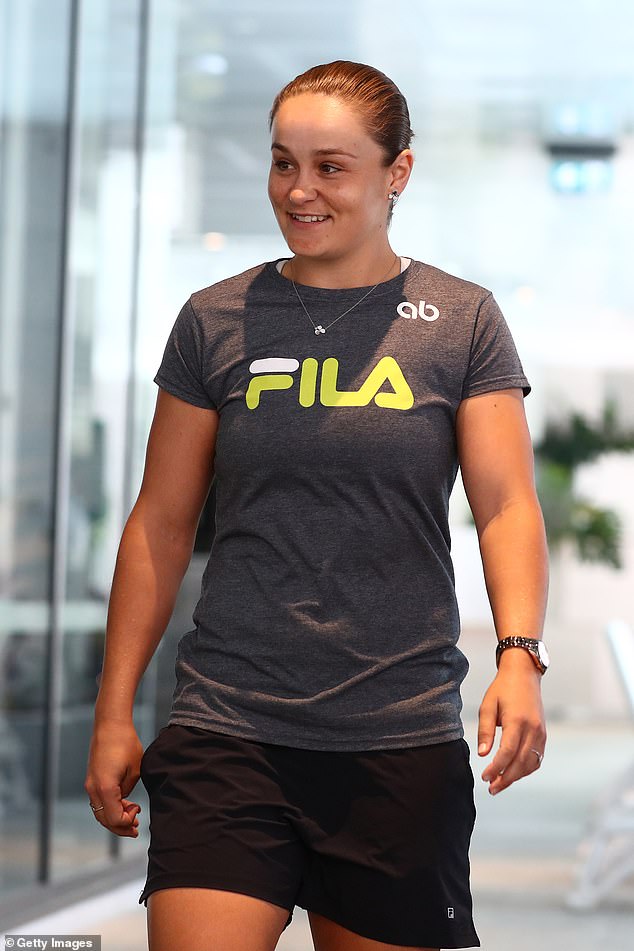 The tennis great said she had ‘no secrets’ as to the reason behind her shock retirement. On Wednesday she said she’d given ‘absolutely everything’ she had to the sport and was ready to step away 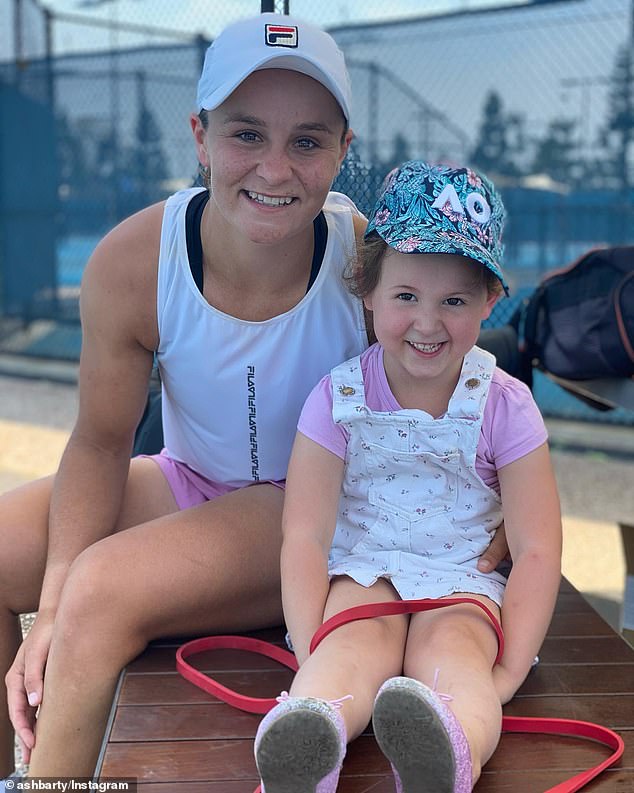 Barty’s niece Lucy (pictured together) said her aunt’s retirement was ‘nice’ because it would give other athletes a chance to be No.1

‘You have to wait and see. I’m not giving you everything right now. It’s alright. You can be patient. Patience is a virtue,’ she said in a press conference on Thursday.

When asked the same question just moments later, Barty again told the reporter ‘you’ll have to wait and see’.

When pressed for more answers, Barty held her ground and said she had ‘no secrets’.

‘I’ve said exactly what I wanted to say. I’m an open book. I’m not hiding anything, I’ve got no secrets,’ she said.

‘I am just so proud of all of the work that I have done with my team. We have done this together right from the start, have enjoyed every single minute and, like I said, we have no regrets.’ 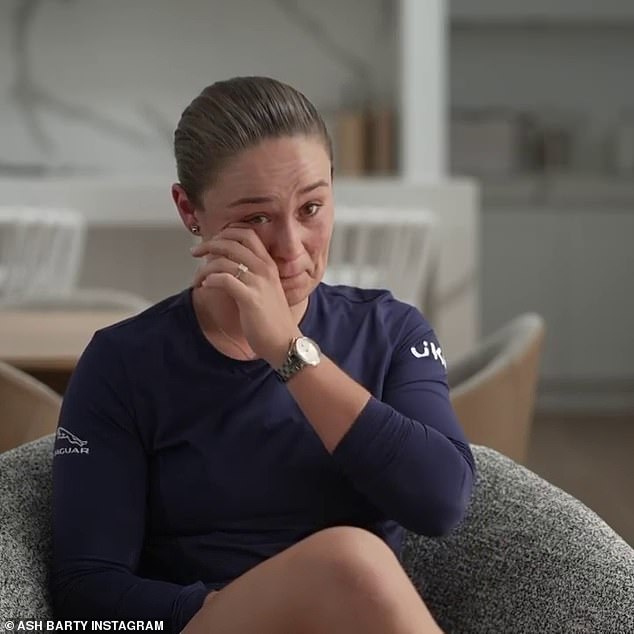 She said that having won Wimbledon, her stellar performance at the Australian Open where she took the title was the perfect way to wrap up her career.

Barty grabbed the world No.1 spot on June 24, 2019, and never relinquished it with strong finishes in Grand Slams for the next two-and-a-half years.

She thanked the support from her family and loved ones, adding her niece Lucy was happy aspiring tennis stars may now have a shot at being number one.

‘My eldest niece, just said to me, she goes, “Oh, that’s nice. It will be nice to see someone else at number one”,’ Barty laughed.

The 25-year-old said she’s looking forward to what the next chapter will hold for her and fiance Garry Kissick, but gave no clues away as to when or where the wedding may be.

Barty was asked if she may pursue another sport, having already starred for the Brisbane Heat in the WBBL.

‘Yeah. I love sport. I’m a sport nut, like a lot of Australians are. I’ll be lured to it,’ she said. 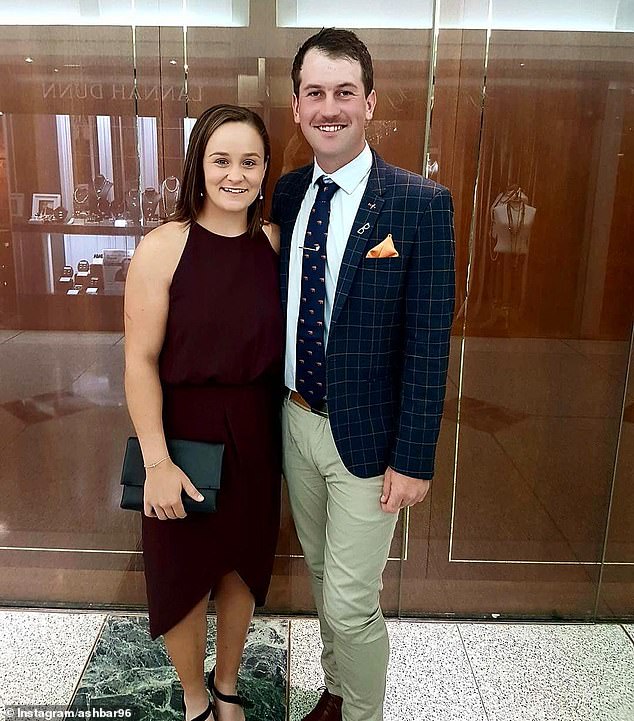 ‘I have always been an athlete in the sense of trying different things but we’ll see how we go.’

Having been a powerhouse in the tennis world, it’s the simple pleasures of life Barty is most looking forward to in her retirement.

‘I have always been a home body,’ she said.

‘I’m really excited to reacquaint myself with my mum and dad and sisters and nieces and nephews and spend quality time with them as a person.

Her coach Craig Tyzzer said after her stunning Wimbledon win, her drive for the sport started to dwindle. 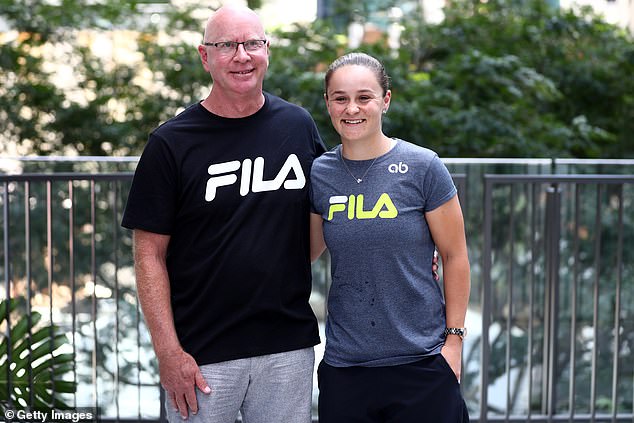 ‘I mean, that (Wimbledon) was an obvious goal for us and once she achieved it, I think once we got to the Olympics, it sort of hit home for me, that there wasn’t much left in her,’ he said.

‘I sort of felt she’d climbed where she needed to get to, and it was going to be a hard slog to keep her involved. So I sort of felt it (her retirement) was coming.’