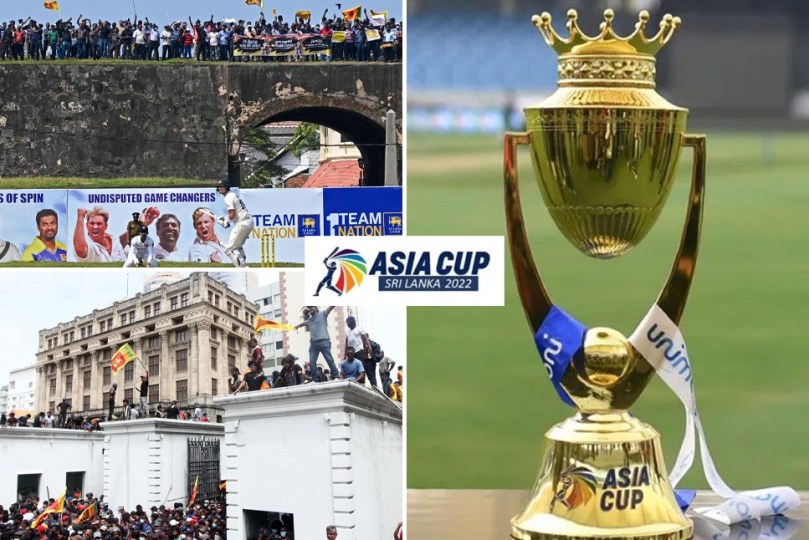 Asia Cup 2022: Asia Cup to be moved? – In a huge blow to SLC, the Asia Cup 2022 could very well be moved out of Sri Lanka following the civilian unrest in the country. While SLC had managed to convince their neighbouring cricket boards including BCCI, protests reached the Galle International Stadium during the SL vs AUS 2nd test. The Asian Cricket Council (ACC) is likely to re-evaluate the venue for the tournament with UAE also available as a likely option. Follow Asia Cup 2022 LIVE Updates on Insidesport.IN

On Saturday, thousands of protestors stormed the Presidential Palace in Colombo as Sri Lanka continue to grapple with civilian unrest. There is a huge shortage of essential goods and protests have been the norm. A few of the protesters reached the Galle International Stadium, during Day 2 of the SL vs AUS 2nd Test. Some of them scaled the Galle Fort which overlooks the Stadium in a massive security lapse, though the match went on without any stoppages.

The protest has made it on to the fort overlooking the cricket. The cops can’t stop numbers like this pic.twitter.com/14HaQ2s7Qd

The SLC are set to beef up security for Day 3 on Sunday as protests are set to continue against the government. The protests come as a big blow to SLC, which is set to host the Asia Cup 2022 later next month. Now, ACC is expected to reconsider the decision in regards to player safety.

The protest has come to the Galle International Stadium. While there is a Test match underway, what’s happening elsewhere and all around Sri Lanka today is way more significant. It’s the people’s call for change #SLvAus #LoveForLanka pic.twitter.com/9nYOlNz7Ar

A loss of hosting rights will cause another major loss to an already dwindling economy and a decision on the same is expected to be taken soon.

Speaking to Insidesport, SLC CEO Ashley de Silva had suggested that not hosting the Asia Cup would result in a loss of 5-6M in revenue.

“Big revenues get generated by hosting teams like India and Pakistan. That’s why we are still trying to persuade the countries to play in Sri Lanka. For us revenues are critical. At this stage even for our country any incoming dollar is critical. We are all geared up to host the Asia Cup and we all are in a positive mood”, said CEO of SLC Ashley de Silva.

Earlier this week, Sri Lankan media reports suggested that the SLC had received the green light to carry forward with the Asia Cup. The successful hosting of the ODI and T20I series against Australia did put SLC in good light, but the recent protests should put in a huge question mark.