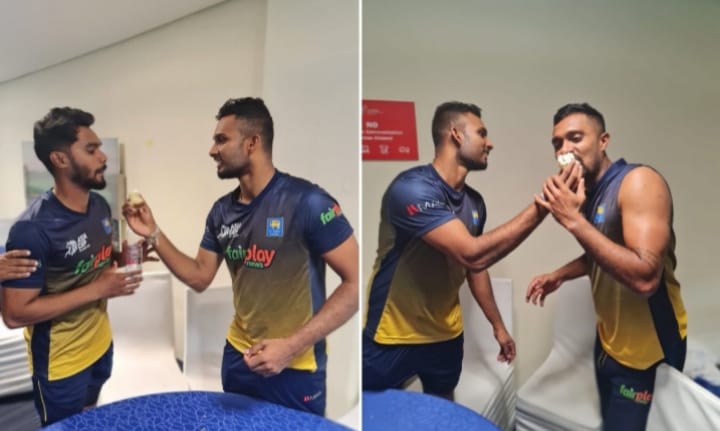 Asia CUP 2022- Dasun Shanaka Birthday Celebrations: On Friday night it was time for DOUBLE Celebration in the SriLanka camp. With victory…

SriLanka win by 5 wickets: On ground also it was time for SriLanka to celebrate. Sri Lanka have turned out to be giant slayers. After beating India, Dasun Shanaka have defeated Pakistan by 5 wickets to finish the Super 4 Stage unbeaten.

Pathum Nissanka was the star with the bat scoring an unbeaten 55 off 48 balls as Sri Lanka chased down 122-run target with 3 overs to go. But it was Wanindu Hasaranga who set the stage with a 3/21 spell, helping Sri Lanka bowl out Pakistan for just 121 runs.

Sri Lanka are now on a five-match winning streak after the disastrous first match against Afghanistan. And in all those five games, Dasun Shanaka have successfully chased down totals. But today’s match was a dead rubber and SriLanka and Pakistan will face off again on Sunday in the GRAND FINALE.

Chasing a target of 122 was not a tough ask. But Pakistan pacers ensured, it wasn’t that easy. Mohammad Hasnain and Haris Rauf struck early in the first two overs. Kusal Mendis and Danushka Gunathilaka both departed for ducks. When Haris Rauf removed Dhananjaya De Silva for 9 inside the powerplay, it seemed it was going to be a close fight.

However, Pathum Nissanka ensured it wasn’t the case. The Lankan opener slammed his second consecutive half-century to keep Pakistan’s attack at bay. He added 51 runs off 39 balls with Bhanuka Rajapaksa to halt Pakistan’s comeback in the match.

While Rajapaksa failed to see things off, falling for 19-ball 24, Nissanka added 33 runs with captain Dasun Shanaka to take Sri Lanka closer to the win. In the end, Wanindu Hasaranga scored a 3-ball 10 to finish things off and take the Player of the Match award.

With 5 fours and a six, Nissanka remained unbeaten on 55 off 48 balls and will hope to repeat his performance in the final on Sunday again. Nissanka said the three early wickets actually helped him play with a calm and composed mind, not rushing things off.

Fakhar Zaman was first to fall as scoring against Dhananjaya De Silva, Hasaranga and Maheesh Theekshana became a difficult affair. Zaman tried to upper-cut Chamika Karunaratne only to find Hasaranga at the boundary line. From 63/2, all went downhill.

Hasaranga cleaned up Babar Azam as the Pakistan captain scored a sluggish 29-ball 30. And then, wickets kept on tumbling. Hasaranga bagged 3/21 with the wickets of Babar Azam, Ifthikar Ahmed and Asif Ali — all three clean bowled. Maheesh Theekshana was also exceptional with 2/21 as Pakistan went from 63/2 to 121 all out in 10.4 balls. In all, Sri Lanka bowled 51 dot balls as Pakistan never looked comfortable in the middle.