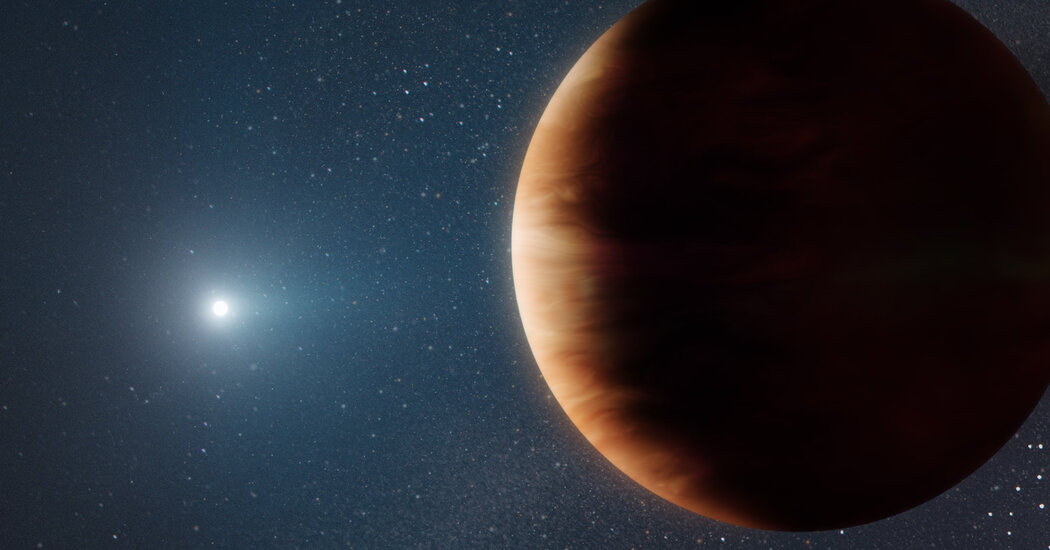 When our sun enters its death throes in about five billion years, it will incinerate our planet and then dramatically collapse into a dead ember known as a white dwarf. But the fate of more distant planets, such as Jupiter or Saturn, is less clear.

On Wednesday in the journal Nature, astronomers reported observing a tantalizing preview of our solar system’s afterlife: a Jupiter-size planet orbiting a white dwarf some 6,500 light years from here.

Known as MOA-2010-BLG-477Lb, the planet occupies a comparable orbit to Jupiter. The discovery not only offers a glimpse into our cosmic future, it raises the possibility that any life on “survivor” worlds may endure the deaths of their stars.

“While there is quite a lot of evidence of rocky planetary debris orbiting around white dwarfs, we have very few data points of intact planets,” said Joshua Blackman, a postdoctoral researcher at the University of Tasmania and lead author of the study.

“The fate of our solar system is likely to be similar to MOA-2010-BLG-477Lb,” he added in an email. “The sun will become a white dwarf, the inner planets will be engulfed, and the wider-orbit planets like Jupiter and Saturn will survive.”

The planet was first spotted because of the light-warping effects of its gravitational field, a phenomenon known as microlensing. After searching for years for its host star with the Keck II telescope in Hawaii, Dr. Blackman and his colleagues concluded it was orbiting a white dwarf that is too faint to directly observe.

Astronomers using a different method last year reported spotting another intact Jupiter-like planet, known as WD 1856 b, closely orbiting a white dwarf. But MOA-2010-BLG-477Lb circles its hidden stellar husk at nearly three times the distance between Earth and the sun, making it the first known planet to occupy a Jupiter-like orbit around a white dwarf. WD 1856 b, by contrast, orbits its white dwarf every 1.4 days, suggesting that it migrated into its current position after the death of its star, though the exact mechanics of that journey are still being hashed out.

Andrew Vanderburg, an assistant professor of physics at the Massachusetts Institute of Technology who led the team that discovered WD 1856 b, said the conclusions of the new study appear solid. He also noted that planets with wide orbits around white dwarfs are probably more abundant than those in tight orbits, but that the latter group are simpler to detect.

“If I had to guess, I would say that theirs is a much more common population because it just has to stay there and have nothing happen to it,” Dr. Vandenberg said. “That feels to me like the most likely outcome, at least at this point in the universe’s history.”

The new discoveries can yield insights about the search for extraterrestrial life and the potential habitability of white dwarf systems. Lisa Kaltenegger, the director of the Carl Sagan Institute at Cornell University, has suggested that some life-bearing star systems might even experience what she calls a “second genesis” in which new organisms emerge in the reconfigured fallout of a white dwarf system.

Dying stars spew out harmful radiation as they grow into a phase called red giants, and introduce turbulence in their systems that could obliterate life. But there are some speculative scenarios that might preserve the habitability of white dwarf systems.

“There are a lot of things that have to go right,” Dr. Vanderburg said. He imagines a planet distant from a red giant star that then moves closer to its sun but retains “enough water to potentially be a nice place to live” when the star turns into a white dwarf.

Because white dwarfs are small and dim, such a planet would have to be in a very close orbit for liquid water to exist. However, if life were to emerge on a world like Jupiter’s moon Europa, which is thought to contain a subsurface ocean, it could potentially survive at a greater distance from the star.

“If humanity is somehow still around in five billion years, we would probably have a better chance of surviving the sun’s red giant phase on a moon of Jupiter than on Earth,” Dr. Blackman said.

Though the existence of life around white dwarfs remains a matter of speculation, next-generation observatories, such as the James Webb Space Telescope and the Nancy Grace Roman Space Telescope, could help to provide concrete answers to some of these evocative questions. As more intact planets are spotted orbiting white dwarfs, scientists will gain a clearer picture of the life, and afterlife, of these mysterious systems.

“This is the first detection of a planet orbiting a white dwarf made using the microlensing technique,” Dr. Blackman concluded, “but almost certainly not the last.”