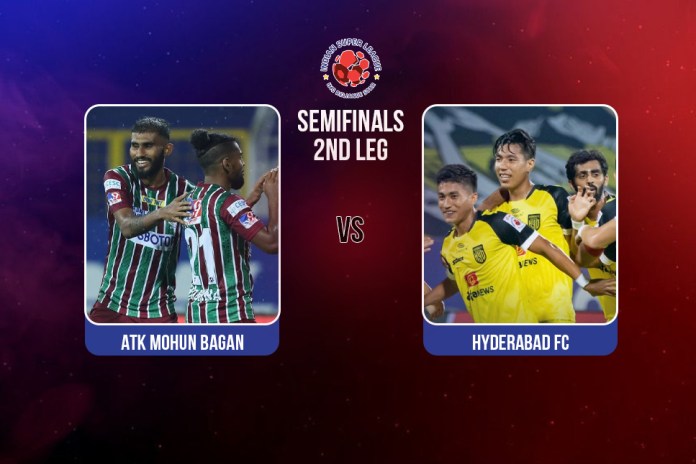 ATKMB vs HFC: Hyderabad FC already have a step in the Indian Super League finals but to assure their berth they need to play another match against ATK Mohun Bagan in the second leg of the semifinals. The first leg ended in a 3-1 defeat for the Mariners and it was a defeat that was hard to swallow for them as they led the first half and played way better than the scoreline suggests. Follow all the ISL 2021-22 LIVE Updates only on InsideSport.IN

ATK Mohun Bagan took the lead in the first half through a brilliant move from Liston Colaco who found Roy Krishna in space as the Fijian tucked it past Laxmikant Kattimani. However, they failed to maintain the upper hand heading into halftime. Right at the stroke of the halftime whistle Bartholomew Ogbeche found a lucky equaliser and headed into the dressing room on equal term. The goal rejuvenated the Nizams from a very drab first half and therefore motivated them to come out the way they did in the second half.

The Green and Maroons have a mountain to climb in the second leg as they need an outright win by three goals to trump Hyderabad in the race to the finals. However, head coach Juan Ferrando feels everything is possible in football as he motivates his men to come out with a flawless performance in the second leg.

“In football, everything is possible. It is not so easy but it is not impossible,” Ferrando said on the eve of the game.

“We will see a plan for Hyderabad, but for me most important is to plan for ourselves and try to change the score. We have these moments which were not easy, but it is necessary to prepare a plan. The most important thing is the mentality. It has not been easy for us in the last month but we will try as best as we can,” the Spaniard added.

Also Read: ISL 2022 final Tickets: 100% crowd allowed for final on March 20, How to book tickets and all you need to know

On the other hand, Hyderabad FC will look to avoid any errors in defence and hold their shape properly throughout the next ninety minutes to find them in their first-ever ISL finals. Despite all the advantages that the Nizams have, head coach Manolo Marquez wants his team to be very alert as he is wary of the team they will be facing and their quality.

“I am very happy with the result in the first leg. They played better than us in the first 30 minutes. We recovered after that. They have very good players and they have improved. We have a good advantage with two goals but it will be difficult for sure. We will have a chance to qualify but it won’t be easy,” Hyderabad head coach Manolo Marquez said.

The matches between ATK Mohun Bagan and Hyderabad FC have always been close affairs. Both sides have played five matches till now and out of which both sides have won one while the other three have ended in stalemates.