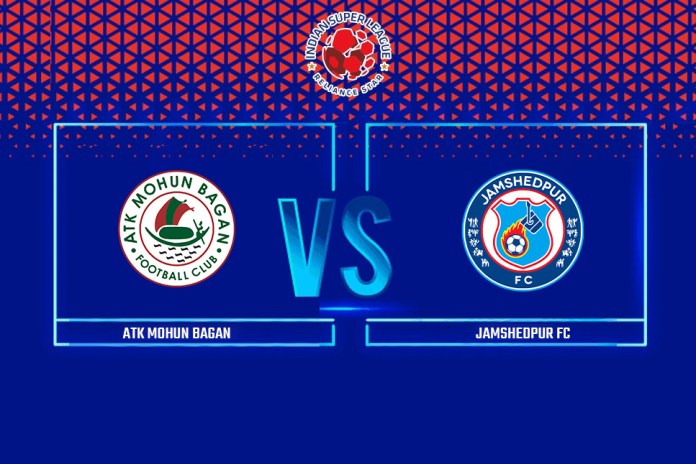 ATKMB vs JFC: ATK Mohun Bagan and Jamshedpur FC fittingly lock horns in a battle for top spot in the 2021-22 Hero Indian Super League (ISL) at the PJN Stadium in Fatorda on Monday in the last league stage match of the season. Follow all the 2021-22 LIVE Updates only on InsideSport.IN

A Jamshedpur FC win or a draw against ATKMB would guarantee JFC the League Shield. ATKMB need to beat JFC by two or more goals to win the season’s first piece of silverware. Jamshedpur have 40 points from 19 games while third-placed ATKMB have 37.

When Jamshedpur and ATKMB face each other, they are not fighting for the Shield alone. Both the teams are on the verge of breaking Hero ISL records in their next game. For Jamshedpur, a win would mean they would become the first team ever to win seven straight Hero ISL games. After their last win, Jamshedpur joined Bengaluru FC on six straight wins as joint holders of his record. A win for Jamshedpur would see them break the existing record and create a new record.

Jamshedpur is also on the verge of breaking another record. Jamshedpur have accumulated 40 points in Hero ISL 21-22, the joint highest a team has gained after the league stages of the Hero ISL (BFC in 2017-18, ATKMB and MCFC in 2020-21). A win or a draw would see the club create a new record.

Nigerian forward Daniel Chima Chukwu scored twice in Jamshedpur FC’s 5-1 win over Odisha FC as JFC are confirmed to finish in the top two. Chima has scored 9 goals in Hero ISL 21-22, 7 of which have been for Jamshedpur. Since Chima’s debut for JFC, no player has scored more goals in the league than him. Along with Greg Stewart, the duo have been lethal.

ATKMB have also been on a stellar run under Juan Ferrando and Roy Krishna finding his scoring boots in the last game only augurs well for the Mariners. Joni Kauko has also been in good form along with Liston Colaco and Manvir Singh being consistent throughout. The last time the two sides met, Jamshedpur edged past ATKMB by a 2-1 margin.

ATK Mohun Bagan have faced Jamshedpur FC only three times ever since ATK joined hands with Mohun Bagan and decided to be a merged entity last season. Despite considering the three matches it has been a fierce rivalry between two teams not ready to give each other an edge. Out of the three matches, Jamshedpur FC have won twice with the Mariners only bagging a single victory.

The first leg of this fixture in the current campaign ended in a 2-1 win for the Men of Steel. Seiminlen Doungel and Alex Lima scored the goals for Owen Coyle’s men as Pritam Kotal came up with the consolation for the Green and Maroons. However, an identical result in the second leg will mean that Jamshedpur FC will create history.