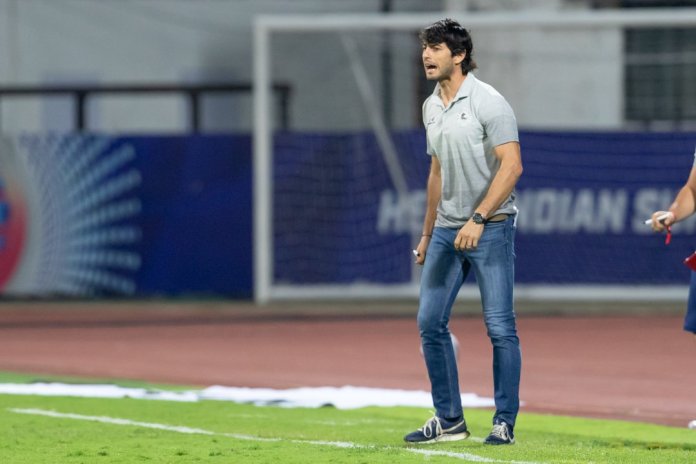 Redeem Tlang opened the scoring for the Kalinga Warriors early on to make their intentions clear. However, the Mariners restored parity as Joni Kauko converted from the spot. This draw will sure come back to haunt Juan Ferrando’s men as they fail to cut the deficit at the top of the points table.

Reflecting on the game, Juan Ferrando shared how disappointing was the game for his men as it takes a huge hit to their ISL Shield plans. “Disappointing for us. Our target was to get three points. This is my thought for today’s game,” Ferrando stated at the post match press conference.

The Spanish tactician is still positive that his men will be able to finish at the summit despite dropping points against Odisha FC. He assures the Mariners that they will fight till the last game. “It’s necessary to fight until the last moment. This is my target and our mentality. Till the last moment, we need to fight,” the Spaniard added.

Also Read: ISL 2022: Hyderabad FC’s Manuel Marquez thrilled to book a place in semifinals for the first time- check out

ATK Mohun Bagan have been in a rough spot ever since the COVID-19 breakout. There have been injuries, consistent form and a lot off the field issues that have taken the sheen out of their on-field brilliance. The injuries have kept on piling and that has had a big effect in their last two matches. But he does not want to use this factor as an excuse.

‘It’s difficult when you do the necessary substitutions for injuries. This is the reason because when players are ready you can do substitution depending on the performance, depending on that moment if you want to change the plan. But when you lose three substitutions for injuries it gets difficult. But this is not an excuse it’s a problem for all the teams because of quarantine and no training then you come to play two games in three days, it’s normal,” asserted Juan Ferrando.

Roy Krishna took the field today after a long injury layoff. He looked pretty good on the wide areas and did cause some problems for the Odisha FC defenders. But his couple of unnecessary challenges meant that he was sent off right at the stroke of the final whistle. But when asked about the red card. Ferrando diverted from the topic and only pointed out how the next game against Bengaluru FC is of prime importance.

“Now, I think it’s necessary to take up the race and prepare for the Bengaluru FC game. Now it’s not necessary to talk because at this moment we need to keep calm and think for the next day,” the Spaniard concluded.