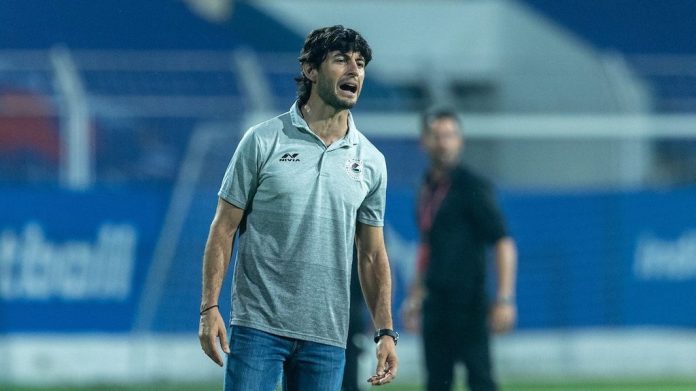 ISL Season 8: ATK Mohun Bagan registered three wins on the bounce as they defeated FC Goa 2-0 to go level on points with league leaders Hyderabad FC in the Indian Super League. Follow all the ISL 2021-22 LIVE Updates only on InsideSport.IN

Manvir Singh scored on either half to stretch ATK Mohun Bagan’s unbeaten run to 11 games this season. Despite the win head coach Juan Ferrando was not entirely happy after the game. The Spanish tactician was happy with the character shown by his men but he was not impressed with the performance overall.

It was a one-man show at the Athletic Stadium in Bambolim tonight!

Juan Ferrando was upset with the way his players pressed during the buildup. He understood that the players are tired and some of them are not in optimal shape. He lauded the character shown by the players in securing the result but he is always striving for more.

“We had more opportunities than our opponents I think, but to be honest in the build-up, in the timing of press, today was not good. This is the truth. I understand the players are very tired. Today was a difficult game for them because after 45 hours to play it’s very difficult. They had personality and I’m very happy with the character of the team but I am upset about some details in the football,” Ferrando pointed out at the post match press conference.

This win takes ATK Mohun Bagan level on points with league leaders Hyderabad FC. However, Ferrando does not pay much heed to all of these things as he wants to keep the focus on the next game against Kerala Blasters. He highlighted how playing in three days is not ideal but they will have to put up another great performance to maintain their position in the playoffs.

“Yes, but now I’m thinking about the next game. It’s very difficult in every game for me because every opponent has good squads and the second detail is the situation, Ferrando replied. “After three days, it’s very difficult to play. Our focus is thinking about Kerala now and not thinking about where we are on the table because maybe after two-three days you are in the third position or you’re in the fourth position and so, I think it’s necessary to put focus on the next game.”

Manvir Singh scored a brilliant brace whereas Liston Colaco had another sensational outing albeit not getting into the scoresheet. These two players have allowed ATK Mohun Bagan to continue their winning streak despite injuries to Roy Krishna, Hugo Boumous and others. But Ferrando feels both the players need to improve a lot.

Juan Ferrando surprisingly started Sandesh Jhingan in defence with a five man backline formation. It was a special occasion for him and he did a decent job out there. Coming back to the footballing details, Ferrando kept on changing the system as he wanted to improve the buildup. But he was left disappointed as he felt that his players had a terrible night in buildup and pressing despite the win.

“The system for me is not important because we started the system with 352 because we wanted to work in build-up. We had no success and changed to 4231 with the right back and left back inside. We had no success and in the end, we played 442 to try and improve in the build-up, and in the end, also changed some details of the high press because the high press was terrible today,” Ferrando concluded.