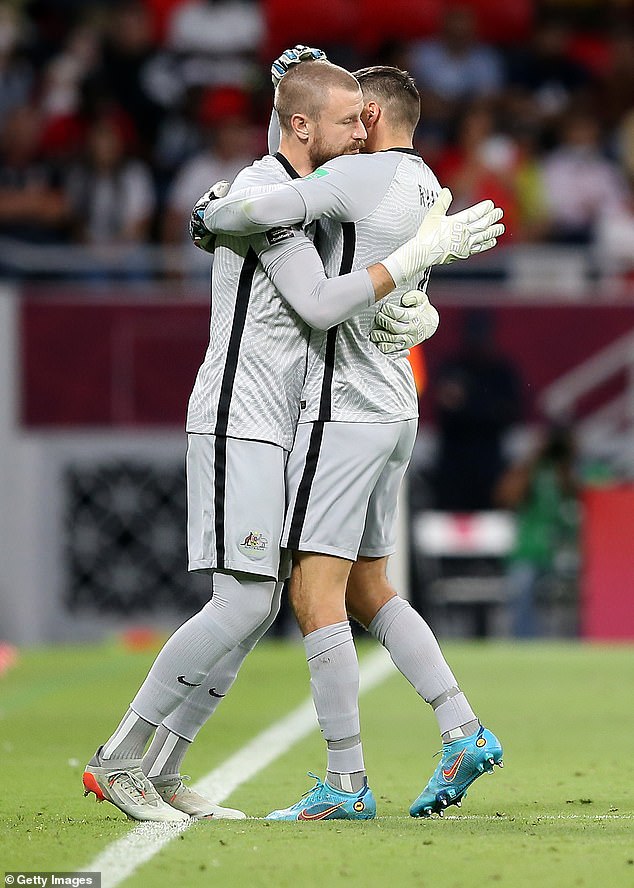 Socceroos captain and goalkeeper Mat Ryan had no idea he would be swapped out for new national hero Andrew Redmayne – but later acknowledged the genius of the move with a kiss.

In a coaching masterstroke by Graham Arnold, Ryan was substituted for spot kick specialist Andrew Redmayne just before the game went into a penalty shootout, with the replacement then going on to produce the match-winning save.

The selfless skipper showed his admiration for matchwinner Redmayne with a kiss on Redmayne’s shaved head on the bus after the game.

It was a heartwarming moment between the pair after World Cup qualification was sealed 5-4 on penalties.

One of Australia’s most recognisable Socceroos, the decision to replace Ryan in the 120th minute will go down in Australian sporting folklore.

Redmayne said after the game his compatriot got right behind him, despite being substituted at a crucial time.

”All the best mate, this is your time. You’ve got this mate, it’s all you’,’ he said Ryan told him.

‘He was nothing but supportive.’

Amazingly, Ryan – who plays club football for Real Sociedad in Spain’s La Liga competition – wasn’t even aware of the potential plan to swap Redmayne in for a penalty shootout. 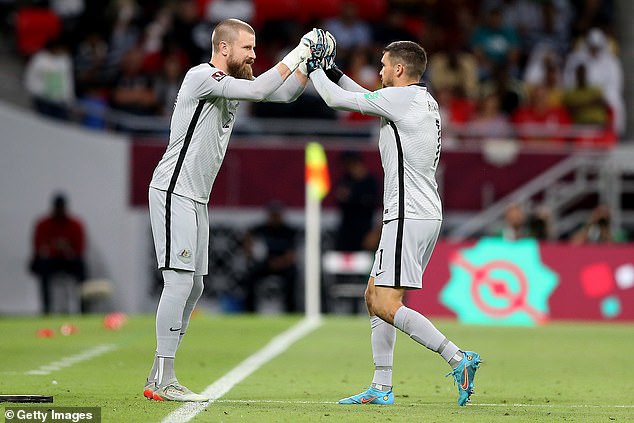 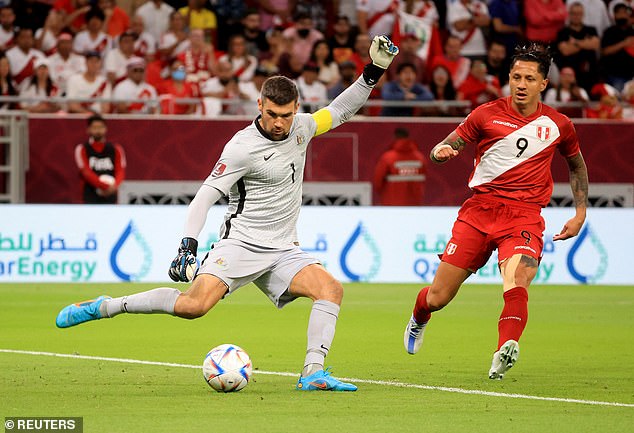 ‘The idea of stopping a penalty was floated at least a month ago, I dare say. John Crawley threw out the theory behind it and said: ‘Get ready for that’,’ he said.

‘It was always in the back of my head for the UAE game and for this game, it was kind of planned, I guess, between myself and the staff.

‘I don’t think any of the players knew about it, … (but) I think a few of them clocked on at halftime (when Redmayne did some drills). I probably didn’t think it would end this way,’ said Redmayne. 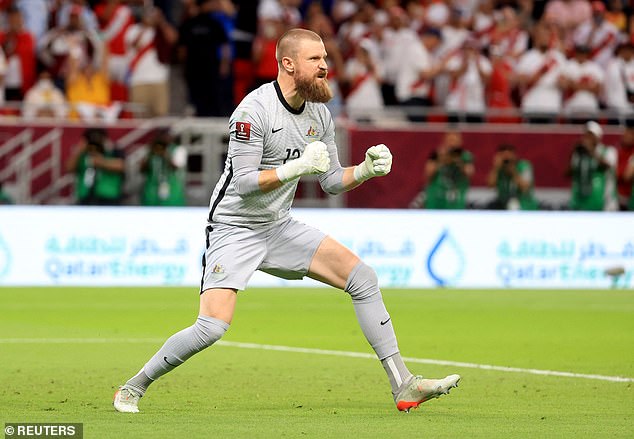 In the bus after the game, the admiration Ryan had for Redmayne was plain for all the see in a post on the skipper’s Instagram channel.

He referred to Redmayne as ‘the man of the moment’ and even gave a mischievous hint as to why Graham Arnold might have pulled him. 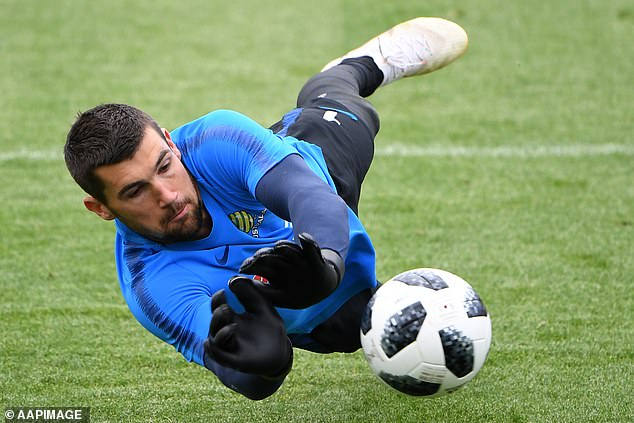 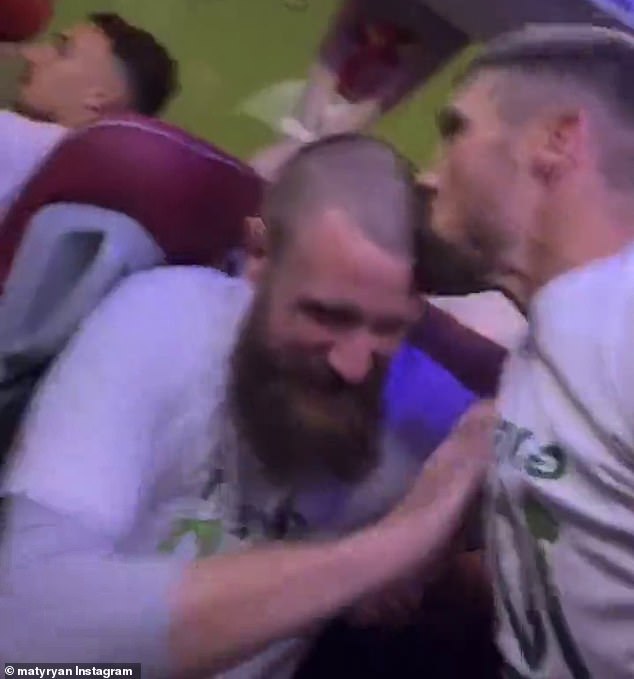 ‘He had one pen (sic) and went the other way no?’ as Ryan asked Redmayne to talk him through the match-winning save, before the latter responded ‘no, he went that side.’

‘Okay okay, I didn’t do my homework. That’s why Arnie, the genius, made the change!’

Ryan also hilariously asked ‘where are the beers bro’ in his video, keen to continue celebrating the win.

He then affectionately kissed his teammate’s shaved head before going on to celebrate with the rest of the bus.

Arnold, who has been criticised by many football pundits, is now the toast of Australia, and will likely always be remembered for this tactical decision that led to securing World Cup qualification. 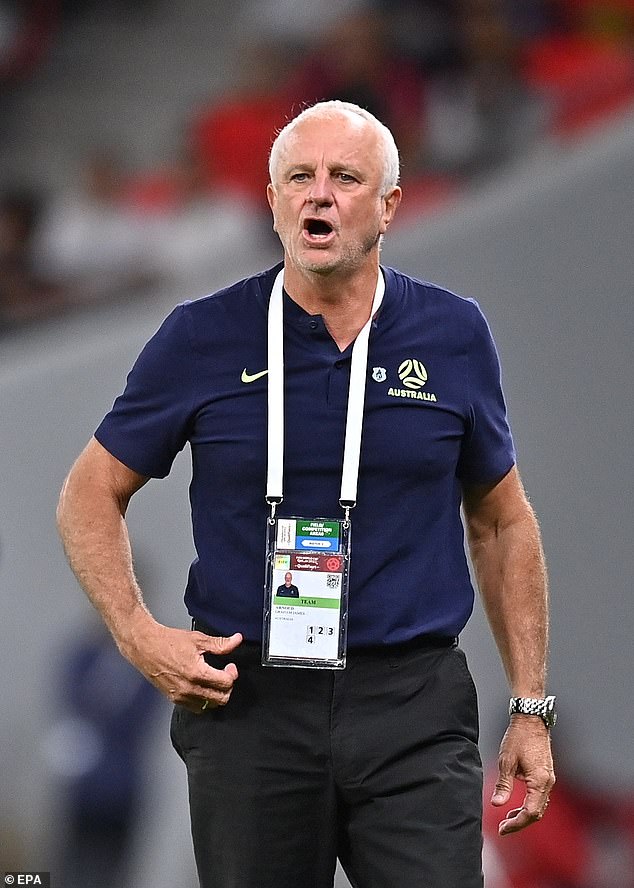 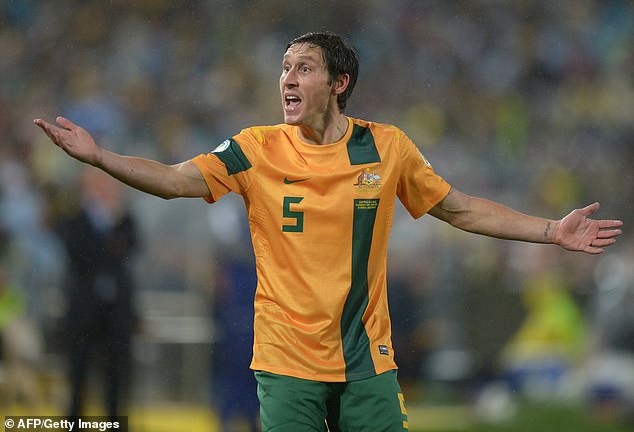 Commentators, including former Socceroos Luke Wilkshire and Mark Milligan, were gobsmacked with Arnold’s courageous call, but lauded him for the impact he had in the win.

‘The character shown, the performance put in, I’m delighted for Arnold,’ said Milligan.

‘The criticism he has copped. The brave decision he made putting Redmayne on. We questioned it. Everyone would have questioned it, but it got us over the line and full credit to him.’

Australia will now turn its attention to Qatar for the World Cup. They’ll get their campaign underway with a tough match-up against France on November 23. 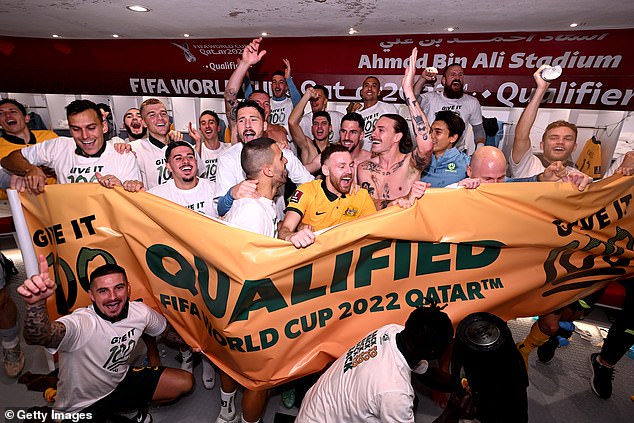 Socceroos players celebrate in the dressing-rooms after the game 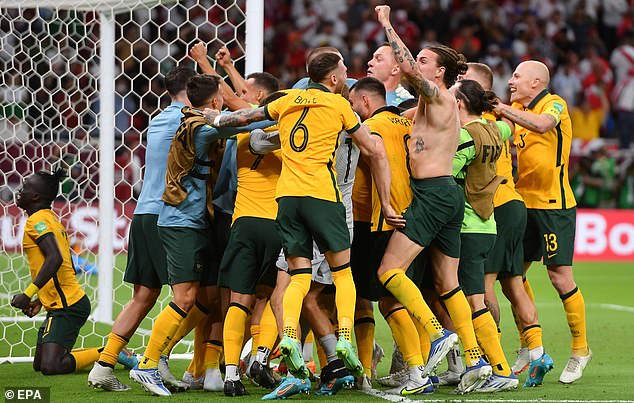