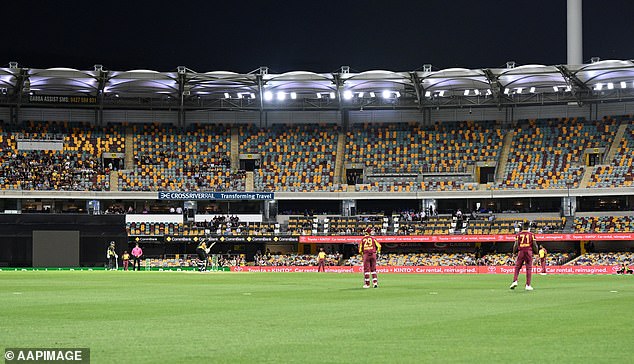 First T20 international match at the Gabba in three years… but nobody turns up! Cricket fans BLAST woeful Brisbane attendance as supporters stay home for Australia’s World Cup warm up against the West Indies

With a home World Cup just around the corner, you’d expect momentum to be building behind Australia as they look to defend their T20 crown.

However, just days after playing to a bare crowd on the Gold Coast, very few fans turned out for their second Twenty20 match against the West Indies on Friday night.

The tourists won the toss and elected to bowl first in Brisbane, having lost by three wickets in their previous match on Wednesday evening. 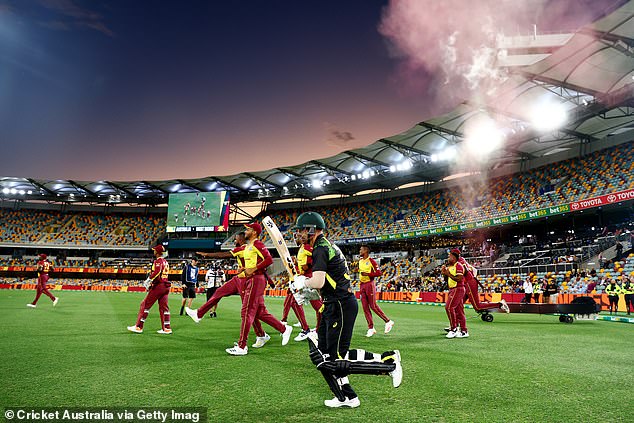 Friday’s game was the first time a T20 international has been played at the Gabba in nearly three years, with the Covid pandemic preventing the venue from hosting games.

But as David Warner found his groove and knocked the ball around the park with ease, wide shots of the arena showed that very few supporters had made the effort to see the world champions.

And fans did not fail to notice the lack of support for Aaron Finch’s side, taking to Twitter to criticise the poor turnout.

‘Literally nobody at the Gabba,’ one fan posted.

‘Another whopping crowd of five at the Gabba for the T20,’ a second said.

A third added: ‘I thought the crowd looked bigger at Gabba than at Metricon, but then remembered the multi coloured seats.’