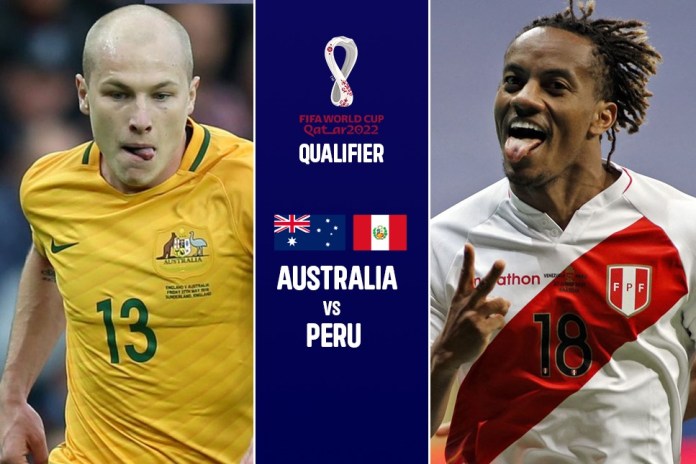 World Cup Inter-Continental Playoff 2022 – Follow Australia vs Peru Live Streaming on 13th June, 11:30 PM on VootSelect: One of the final two spots for the World Cup 2022 will be decided in Monday’s AFC-CONMEBOL Intercontinental Playoff, as Australia take on Peru in the host nation of Qatar. The Socceroos scraped past the United Arab Emirates 2-1 in the most recent round of Qualifying, while their opponents finished fifth in CONMEBOL Qualifying. Follow FIFA World Cup Playoffs Live on InsideSport.IN

Last call for #Qatar2022. Who will take the final two spots?

Australia lost no players to injury during their fourth-round clash with the UAE, although midfielder Tom Rogic withdrew from the squad last week due to personal reasons.

Striker Adam Taggart was back in training earlier this week as he steps up his bid to become available, but 60-cap defender Trent Sainsbury is still being plagued by a knee injury, so Hearts centre-back Kye Rowles could once again man the backline alongside clubmate Nathaniel Atkinson.

There have been calls for Arnold to revert Matthew Leckie to his natural role out wide as Jamie Maclaren returns to the forward line, but whether the Socceroos coach heeds such advice remains to be seen.

105-cap defender Luis Advincula was absent from the friendly win over New Zealand due to injury, but the 32-year-old’s father has declared his son fit for the playoff.

Midfield general Renato Tapia has also been put through his paces in training and should be fine to line up from the first whistle, but Edison Flores and Christian Ramos may not make it.

Pedro Aquino and Aldo Corzo are set to make way for the returning Tapia and Advincula respectively, while left-back Marcos Lopez was taken off injured against New Zealand and ought to cede his place to Miguel Trauco.

When will Australia vs Peru kick-off? Date

The World Cup Inter-Continental playoff match between Australia vs Peru will kick-off on 13th June, 2022

What time will Australia vs Peru kick-off? Time

Where will Australia vs Peru be played? Venue

Where to watch live streaming of Australia vs Peru in India?

Fans in India can watch World Cup Qualifier of Australia vs Peru on VIACOM18 netwrok’s Sports 18-1, while VootSelect will be live streaming the match.