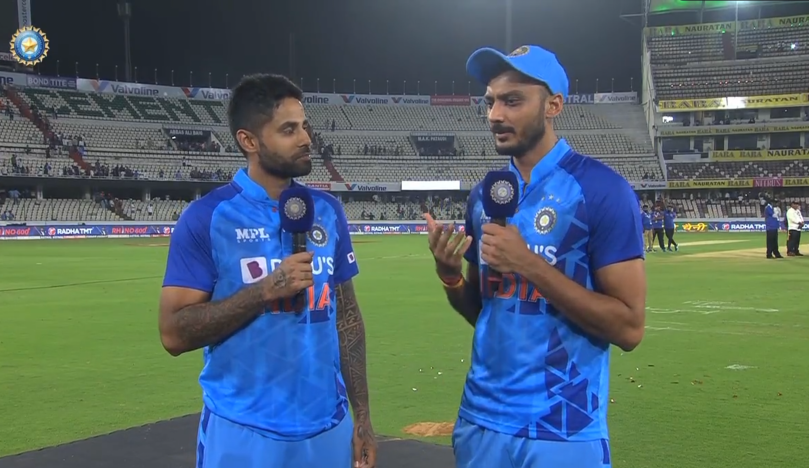 Axar Patel Interviews Surya – IND vs AUS Highlights: SuryaKumar Yadav played one of his most brilliant innings on Sunday to deflate Australian bowling attack. SKY smashed 69 off just 39 balls and gave India the much needed series win before the ICC T20 World CUP. According to his teammate Axar Patel, team is completely blown away and awestuck by Surya’s strokeplay. After the WIN, Axar did a very special interview of Surya – Watch OUT & Follow Indian Cricket LIVE Updates with InsideSport.IN

From setting the stage on fire to a special pre-match tale! 🔥 😎

Men of the hour – @surya_14kumar & @akshar2026 – discuss it all after #TeamIndia‘s T20I series win against Australia in Hyderabad. 👍 👍- By @RajalArora

IND vs AUS Highlights – India win by 6 wickets: India have won a T20 series against Australia at home after 9 years with 6-wicket victory in Hyderabad. Suryakumar Yadav and Virat Kohli were the stars as the two added 104 off 62 balls for the third wicket to take India cruising in a 187-run chase. Kohli smashed 63 off 48 balls while SKY smashed 69 off 39 balls as India chased down 187 with a ball to spare. Check IND vs AUS 3rd T20 Highlights and Watch India vs Australia 3rd T20 Highlights with InsideSport.IN.

India vs Australia 3rd T20 Highlights: Chasing a target of 187 was never going to be easy and Australia made it more difficult. Josh Hazlewood removed KL Rahul in the first over while Rohit Sharma departed in the 4th over, leaving India reeling at 30/2. But then Virat Kohli and Suryakumar Yadav took charge. With 50/2 in the powerplay, India were still behind Australia in terms of asking rate. But then Suryakumar Yadav lit up Hyderabad SKY. Glenn Maxwell and Adam Zampa both struggled to keep the two dashing batters in check.

With fifty-run stand up in the 9th over, there was no looking back. SKY hammered 69 off 36 balls to take India closer to the target. With a massive back-to-back two sixes in Adam Zampa’s spell, Suryakumar brought up his half-century. The duo of Kohli and Suryakumar brought up their 100-run partnership stand in 59 deliveries as they continued their carnage on Australian bowlers.

Suryakumar looked in great touch smashing Hazlewood for one six and four, however, his stint was cut short as he tried to play a shot on straight to long-off but handed an easy catch to Aaron Finch for 69 runs in 36 deliveries in the 14th over of the match.
Hardik Pandya then came to bat on the crease. In the 16th over of the innings, Kohli also brought up his half-century in 37 deliveries. This was Kohli’s 33rd T20I fifty.

India needed 32 runs in 18 balls and Pandya and Kohli’s duo smashed Cummins for 11 runs in the 18th over. In the second last over Pandya showed his great skills he slammed a six on the very first delivery of Hazlewood’s spell.

With 11 runs left to win in the last over, Kohli sent the very first delivery of Sams for a six but was sent back to the pavilion after scoring 63 runs in 48 balls. With 5 runs left to win in 4 balls, Dinesh Karthik came out to bat. Sams delivered a wide yorker but Hardik cleverly opened the face of the bat and sliced this fine with one hand to get it to the boundary. With a clever boundary, Hardik guided his team home to clinch the three-match T20I series against Australia. Earlier, Cameron Green smashed 52 off 21 and a late blitz of 54 runs by Tim David guided Australia to post a competitive total of 186/7. For Australia, Cameron Green smash 52 off 21 while a blistering knock of 54 runs by Tim David powered Men in Yellow to a decent total. For India Axar Patel scalped three-wicket while Bhuvneshwar Kumar and Harshal Patel bagged one wicket each.

Put to bat first, Australia got off to a flying start as opener Cameron Green smashed Indian bowlers all around the ground, Green smashed Bhuvneshwar Kumar for a massive six on the second delivery of the game, but it was not enough for the Australia opener as he slammed a stunning four and gathered 12 runs in the first over of the innings.

Green in red-hot form continued his carnage in the second over to smashing two fours piling 11 runs in an over. The third over of the innings saw Green hammer a four before slamming two huge sixes on the delivery of Jasprit Bumrah.

Axar Patel was brought into the attack he gave his team a big breakthrough, dismissing Aaron Finch for 7 runs. However, the skipper’s wicket did not stop Green’s carnage as he slammed back-to-back three fours and brought up his 19-ball half-century in the fifth over of the game.

Bhuvneshwar was brought back into the attack and the pacers gave his team a huge breakthrough as he dismissed Green. Green departed after playing a fantastic knock of 52 in just 21 balls.

reen’s dismissal brought all-rounder Glenn Maxwell to the crease. Maxwell then joined hands with Steven Smith to keep the scoreboard running for the team. In the 8th over, with a brilliant and fast fielding by Axar Patel helped wicket-keeper Dinesh Karthik stump run out Maxwell for 6 runs. After Cameron Green’s blitz India Pulled things back in their favour as Australia’s score read 75 for three. Josh Inglis then came out to bat on the crease. Smith’s stint on the crease was cut short as he was stumped by Karthik on the delivery of Yuzvendra Chahal after scoring 9 runs in 10 deliveries.

Smith’s wicket invited right-handed batter Tim David to bat on the crease. After 10 overs, Australia’s score read 86 for 4. With four wickets down Australia looked in trouble as the duo of Tim David and Inglis struggled a little to get runs.

However, the struggle did not last long as the batters steal quick boundaries and took their team’s score beyond the 100-run mark in the 12th over. Axar Patel struck twice in the 14th over, dismissing Inglis who smashed 24 runs in 22 deliveries and new batter Matthew Wade who was caught and bowled by him. Axar totally broke the back of the visitors’ middle order in the 14th over, getting rid of Josh Inglis and Matthew Wade.

Daniel Sams ended 16th over of the innings with a huge six and four on Hardik Pandya’s spell. In the second last overs, Tim David held the fort from the front and smashed Bhuvneshwar for back-to-back two sixes and one four while gathering 21 runs.

David smashed a massive six in the 19th over of the innings and brought up a 25-ball fifty and his maiden in T20Is. Harshal Patel then stopped the blistering stint of Tim David as he dismissed him for 54 and restricted Australia to 186 for 7 in the 20-over match. David’s knock was decorated with four sixes and two fours.