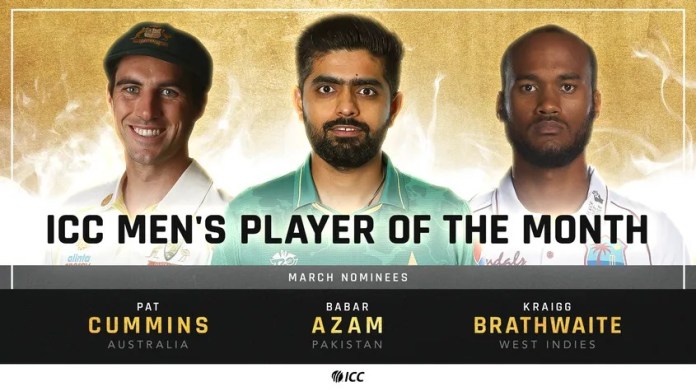 The women’s shortlist for March is comprised of stars from the ICC Women’s Cricket World Cup in New Zealand. England bowler Sophie Ecclestone, and run-machines Rachael Haynes (Australia) and Laura Wolvaardt (South Africa) are in the running to scoop the award following stellar performances during the month against the world’s best.

The ICC Player of the Month nominees for March were announced on Wednesday, based on performances across formats and including matches from the ICC Women’s Cricket World Cup held in New Zealand, amongst others.

An independent ICC Voting Academy* and fans around the world can now vote to decide the winners, which will be announced next week. Fans can register via icc-cricket.com/awards and are invited to cast their votes until Sunday 10 April.

ICC Men’s Player of the Month Nominees for March:

Pakistan’s skipper played an integral part in his side’s batting during the recent series against Australia. Despite not ending the World Test Championship (WTC) three-match series victorious, Babar amassed 390 runs during the month in Tests, including a record-breaking 196 in the second Test to salvage a draw against the odds.

In addition, his efforts at the crease in the two ODI matches during the month saw Babar score 57 and 114 respectively, with the latter helping his side chase down an imposing target of 349 set by Australia. This is the second time he’s featured on the shortlist for the ICC Player of the Month award, after winning in April 2021.

The West Indies’ Test captain and opening batter led from the front during the recently concluded successful WTC series against England, scoring 341 runs at an average of 85.25. Brathwaite’s resolve and determination at the crease was best characterized by his monumental 160 from 489 balls in the second Test in response to England’s big first innings total. This mammoth innings ensured a drawn second Test and provided the platform for his side to clinch the series by winning the final showdown in Grenada.

In a WTC Test series which was dominated by run scoring, Cummins stood out for his bowling performances in unforgiving conditions. He led his side, and the bowling attack, to victory in Pakistan playing a pivotal role in clinching the series thanks to a match-winning spell, taking 5 for 56 in the first innings and following up with 3 for 23 in the second innings of the final test. Taking 12 wickets at an average of 22.50 helped him secure his first nomination in the ICC Player of the Month awards.

ICC Women’s Player of the Month Nominees for March:

Ecclestone’s outstanding bowling performances during the month helped steer her side to the Women’s Cricket World Cup final in New Zealand. Her spin bowling caused problems throughout the tournament for opposition batters, taking 20 wickets during the calendar month at an average of 12.85. Her prowess was capped by a magnificent spell in the victory over South Africa in the semi-final, taking 6 for 36 to ensure a 137-run victory. This is the second time she has been nominated for the ICC Player of the Month accolade (previously shortlisted in June 2021).

Scoring 429 runs in the eight matches she played during the month, Haynes was at the forefront of Australia’s unbeaten run through to the Women’s Cricket World Cup Final. Averaging 61.28 during the month, along with a healthy strike rate of 84.28, her stellar performances came at crucial times – 130 against England in their opening match and 85 in the semi-final victory over the West Indies.

Wolvaardt’s endeavours for South Africa were critical to her team reaching the semi-finals of the Women’s Cricket World Cup in New Zealand. Up to the end of the semi-finals, she was the tournament’s leading run-scorer, amassing 433 runs at an average of 54.12, passing 50 on five occasions and proving a thorn in the side of many opposing teams.

The ICC Player of the Month Voting Process:

The three nominees for either category is shortlisted based on performances from the first to the last day of each calendar month. The shortlist is then voted on by the independent ICC Voting Academy* and fans around the world. The ICC Voting Academy comprises prominent members of the cricket fraternity including well-known journalists, former players, broadcasters, and members of the ICC Hall of Fame. The Voting Academy submit their votes by email and hold a 90 per cent share of the vote. Fans registered with the ICC vote via the ICC website, accounting for the remaining 10 per cent. Winners are announced every second Monday of the month on ICC’s digital channels.

Voting Academy for ICC Player of the Month March 2022*: