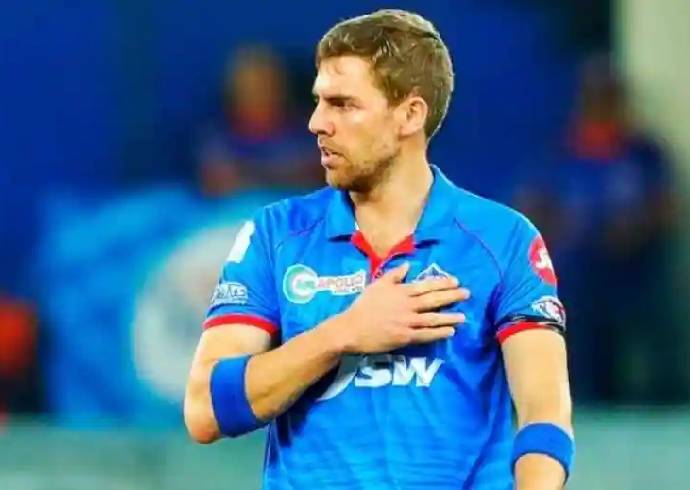 IPL 2022 – Anrich Nortje Delhi Capitals: Delhi Capitals (DC) is set to encounter a BIG BLOW before the start of IPL 2022 on March 26th. DC’s retained pacer Anrich Nortje is likely to miss the IPL Season. According to a South African newspaper, Nortje is struggling to recover from his injuries & may have to skip the entire Season 15 of IPL – Follow IPL 2022 LIVE Updates with InsideSport.IN

The South African has confirmed that Nortje hasn’t started bowling. According to the publication he is yet to fully recover from his HIP INJURY.

“He has been seen by three different orthopedic surgeons. He is struggling with loading and doing most of the other rehab work. He is not ready for action. I guess it’s frustrating. He keeps fit, he works extremely hard. All goes fine, except for when he picks up his bowling loads. He has got discomfort. We have identified three different problems between back and hip and we don’t know which is primary,” Munjra said.

Anrich Nortje Delhi Capitals – Nortje to miss IPL 2022? Earlier this week, Cricket South Africa has announced their ODI team for Bangladesh. During the announcement as well CSA’s selection convenor, Victor Mpitsang had announced that it will be difficult for Nortje to make it to IPL.

“It’s probably going to be difficult [for Nortje to go to the IPL]. He has not really been bowling much since November. We don’t have any timeframe on his return. It’s been a long one. The medical team will give advice on whether he will be cleared for the IPL,” Mpitsang was quoted as saying in ESPNCricinfo.

Why Nortje INJURY will be a big blow for DC? Nortje was one of the best bowlers for Delhi Capitals in the past two seasons for the IPL 2020 finalists Delhi Capitals.

Nortje was retained for 6 crores in the upcoming season. The fastest bowler from South Africa has 34 wickets in 24 IPL matches for DC at an economy of 7.65.

DC is yet to make any official comment on Nortje’s injury.

Thereafter, due to a “persistent” hip injury, he missed the home series against India and the overseas Tests against New Zealand.

Nortje had joined the DC camp in IPL 2020 as a replacement for England’s Chris Woakes who pulled out of the tournament. He has since become a vital cog for the DC and wreaked havoc in two seasons with fellow countryman Kagiso Rabada.