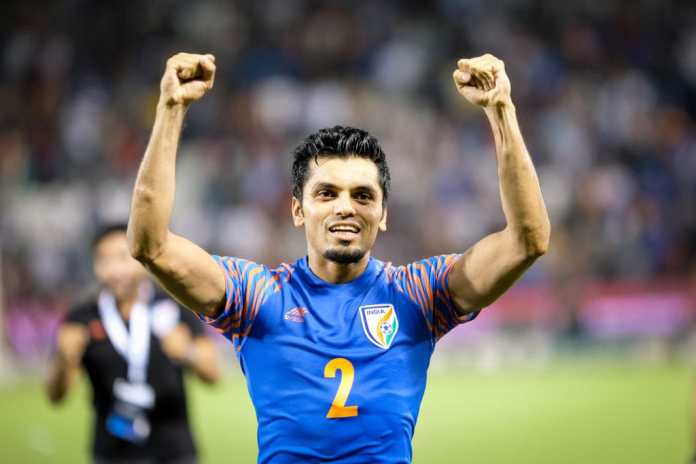 India vs Bahrain LIVE – Bahrain Beat India 2-1: Bahrain beat India 2-1 in an international friendly at the Al Muharraq Stadium in Bahrain, on Wednesday. The hosts had taken the lead through Mohamed Al Hardan (38′) before Rahul Bheke (59′) brought India back in the game but for a late strike by Mahdi Al-Humaidan (88′) that ended up as a winner for Bahrain. Follow all the Indian football updates only on InsideSport.IN

India take on Belarus in another friendly on Saturday, March 27.

FULL TIME! That’s the end of the first of the 2 Friendlies in Bahrain, and it’s a narrow defeat for the #BlueTigers 🐯

Chin up lads. We’ll be back for the next game! 🙌

86′ GOAL for Bahrain. A brilliant move from the hosts as a cross comes floated in the penalty area from the right and reaches Mehdi who was free in the box and he makes no mistake in tucking it past Gurpreet.

77′ Great move from Bahrain as they attack from the right flank as the cross came in it was Sandesh Jhingan who intercepted the ball with a brilliant dive. Desperate defending from India

70′ Stoppage in play as Pronay Halder is down and receiving some treatment. It looks like he is seriously hurt, will be interesting to see if he continues.

59′ GOOOAAAAAL! Roshan swings in a cross from the right, and Rahul Bheke rises above the rest and nods it in! 💪

59′ EQUALISER!!!! India strikes back as Rahul Bheke heads in a brilliant delivery from Roshan Singh.

55′ SUBSTITUTION for India as Anirudh Thapa comes on for the debutant VP Suhair. A very quiet debut for the NorthEast United forward.

47′ ALMOST!! A brilliant move from Manvir Singh as he floats the ball in and Roshan almost has an immediate impact after coming on but his connection was wayward. Good move from the Blue Tigers as they are showing some intent here.

47′ SUBSTITUTION for India as Roshan Singh replaces Liston Colaco on the left flank.

46′ SECOND HALF: India resume the proceedings.

45′ HALFTIME: That’s all from the first half as India put some kind of pressure on the Bahrain defence but the likes of Rahim Ali, VP Suhair, Manvir and Liston have to more action in attack for the Blue Tigers to get anything out of this match.

42′ Indian putting some pressure but it has mostly been long balls so not much to think about from the Bahrain defence.

37′ GOAL for Bahrain as Mohqmad Hardan hands the lead for the hosts. Poor defending from India.

29′ Good move from India as Sandesh Jhingan sprays the ball forward for Liston Colaco who beats the Bahrain defence and sends in a cross which was cleared by the opposition defenders for a corner.

23′ OFFSIDE!! India enjoys some possession and a long ball to Danish Farooq is judged offside for mov9ing too early.

15′ WOODWORK!! A brilliant attack from Bahrain as their left winger delivers a perfect ball for a striker who losses Jhingan in the box but his shot hits the woodwork and stays out.

6′ PENALTY for Bahrain!!! A shot from a Bahraini forward hits Sandesh Jhingan’s hand in the box and the referee points towards the spot. It was a pretty bizarre call as it was nowhere near intentional.

5′ Early pressure from Bahrain but the Indian defence have done well to thwart all the movement from the hosts till now.

1′ KICKOFF!! Bahrain sets things in motion in this friendly match.

The players are coming out on the pitch and will go through pre-match rituals before kickoff.

All set for the night’s clash! 🙌

The Men in Blue have arrived at the stadium to face Bahrain.

DEBUT DAY FOR DANISH! 🇮🇳 The Blues’ midfielder makes his bow for @IndianFootball in their XI set to take on Bahrain tonight. #WeAreBFC #BAHIND pic.twitter.com/xN2blP7esB

The Lineups are out!

🗣 @stimac_igor: “I want my team to carry a brave attitude on the pitch tomorrow”

India will be back in action after they won the SAFF Championship beating Nepal in the finals last autumn. The Blue Tigers are unbeaten in the last nine matches and will look to extend that run even in the upcoming friendlies.

On the other hand, Bahrain have played two friendly matches at the turn of the year against Uganda and DR Congo and have won both the games. They first defeated Uganda 3-1 followed by a 1-0 win against DR Congo.

They are already eliminated from the FIFA World Cup qualifiers second round and had a very underwhelming performance in the FIFA Arab Cup in 2021.

Igor Stimac will miss the services of his talismanic striker Sunil Chhetri, he will also miss the inform Sahal Abdul Samad who could have been the metronome for the Croatian tactician in midfield. He has included seven new faces in the 25-member squad for the two matches and will look to hand everyone some chances to prove their worth. Someone like Roshan Singh will look to impress Stimac with his dead ball skills whereas Ruivah Hormipan will be keen to keep up his form this time in national colours and provide Stimac with more centre back options. Similarly, VP Suhair will also look to make the best out of this opportunity as he has waited a long time before receiving his maiden national team callup.

The International friendly between the Indian national team and Bahrain will not have any telecast or stream in India due to lack of technical support from the Bahrain FA as mentioned by the AIFF.