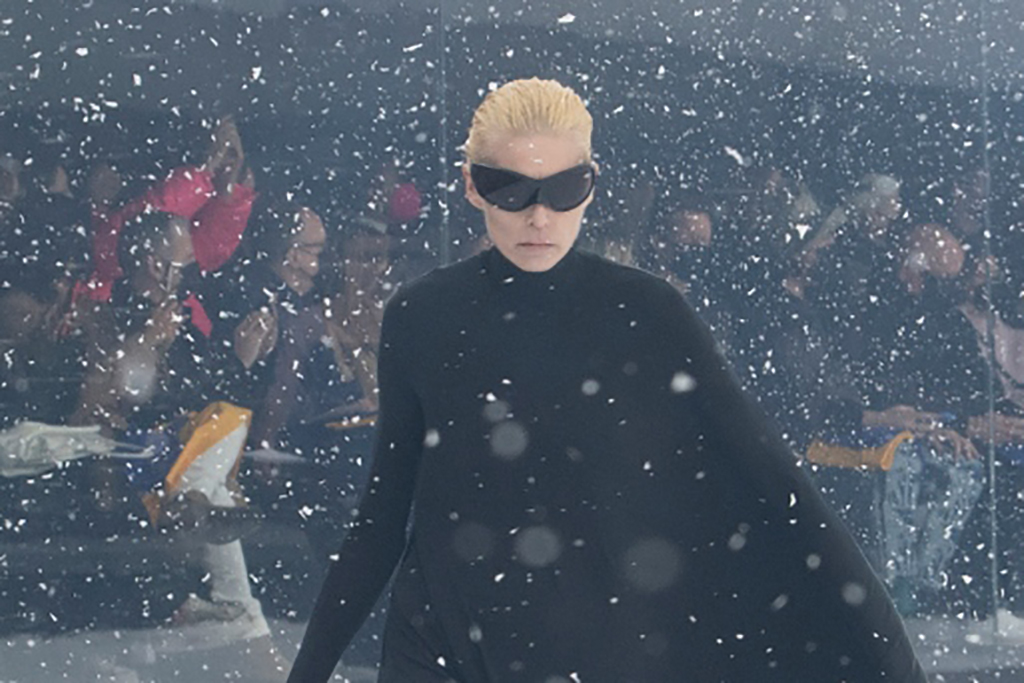 “In a time like this, fashion loses its relevance and its actual right to exist,” wrote Demna in his show notes, which were on every seat at Balenciaga’s fall ’22 show in Paris today, along with t-shirts in yellow and blue, Ukraine’s national colors.

In a time like this, a fashion show couldn’t have been any more relevant. With the set resembling an Arctic tundra — models walked down the runway as fake snow and wind swept through — the event was originally conceived as a commentary on climate change.

Instead, as Demna told WWD, having the models struggle against the elements was more personal. He remembered being in a shelter, “like some other 10-year-old Ukrainian boys and girls now with their parents, not knowing when the ceiling will fall on their heads.”

For Demna, who recited a poem in Ukrainian during the show, the war has brought back many vivid memories of his own experiences as a Georgian refugee during his formative years.

“[It] has triggered the pain of a past trauma I have carried in me since 1993, when the same thing happened in my home country and I became a forever refugee,” he wrote. “Forever, because that’s something that stays in you. The fear, the desperation, the realization that no one wants you. But I also realized what really matters in life, the most important things, like life itself and human love and compassion.”

Demna opened up about how difficult it was to work on a fashion show during the past week as Russia’s attacks on Ukraine intensified. By Sunday, more than 1 million Ukrainian refugees had fled the country.

“In a time like this, fashion loses its relevance and its actual right to exist. Fashion week feels like some kind of an absurdity,” Demna wrote candidly. “I thought for a moment about canceling the show that I and my team worked hard on and were looking forward to. But then I realized that canceling this show would mean giving in, surrendering to the evil that has already hurt me so much for almost 30 years. I decided I can no longer sacrifice parts of me to that senseless, heartless war of ego.”

He concluded, “The show needs no explanation. It is a dedication to fearlessness, to resistance, and to the victory of love and peace.”