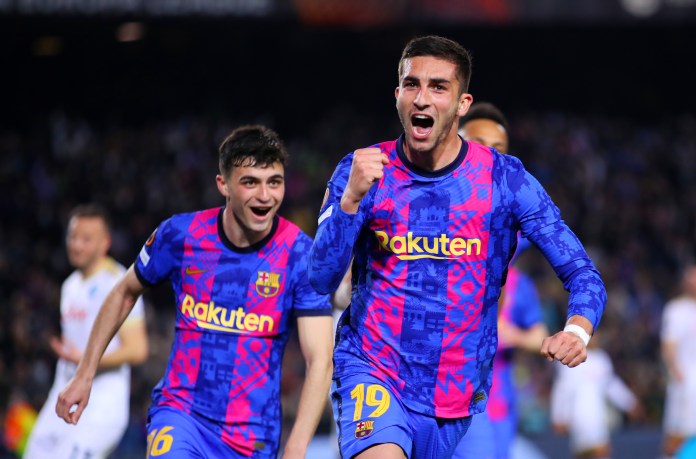 Barcelona 1-1 Napoli Highlights: Ferran Torres scores from the penalty spot – The match ends with the honours even, as despite the second half being one-way traffic, Barca couldn’t add to Torres’ equaliser and win the game. Napoli really began flagging in that second half but stayed firm at the back to go into the second leg level at 1-1. Barca will feel they should have won that game, and had their attack not been so blunt for large swathes of the tie, they may well have. Follow live Football news and updates on InsideSport.IN

Barcelona 1-1 Napoli Highlights: Ferran Torres scores in the Europa League from the penalty spot to cancel out Napoli’s early lead in the 1st Leg of the Round of 32

Barcelona 1-1 Napoli Highlights:  The second leg awaits for both sides, and with the scrapping of the away goals rule in this season’s tournament, the 1-1 draw in Catalonia means it really is honours even when the two sides meet again in Naples. Napoli know they were lucky to escape this game with a draw, but will fancy their chances at home against this Barca side, who are still finding their feet in Xavi’s extensive rebuild of the club.

A contentious second half penalty was enough to give Barcelona a 1-1 draw at home to Napoli in front of an almost sell-out home crowd. The Europa League anthem may take some getting used to to Barcelona fans but there was a very healthy crowd here at Camp Nou for the visit of Napoli.

The Blaugrana were on the front foot from the off with Nico going close after 15 minutes as his close range effort was saved. But after Ferran Torres went close for the home side it was Napoli who took the lead as Piotr Zielinski lashed home a rebound.

Barcelona 1-1 Napoli Highlights:  Into the second half and Xavi’s side were pushing for the equaliser but were frustrated by poor quality in the final third Adama Troare being a particular culprit. They did get their equaliser though as after a controversial VAR review a penalty was given and Ferran Torres dispatched from the spot.

The former Manchester City man had at least two more chances to win the game but fluffed his lines as both sides shared the spoils.

Barcelona 1-1 Napoli Highlights: Ferran Torres scores in the Europa League from the penalty spot to cancel out Napoli’s early lead in the 1st Leg of the Round of 32