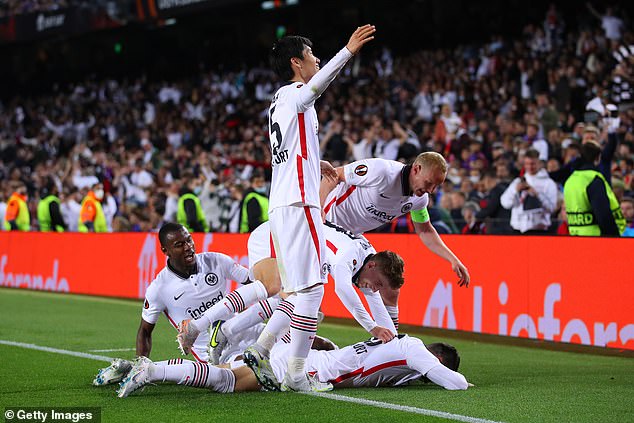 West Ham will play Eintracht Frankfurt in the Europa League semi-finals! Bundesliga side stun Barcelona and dump them out at the Nou Camp as a brace from Filip Kostic and Rafael Santos Borre’s wonder goal put the tie beyond Xavi’s LaLiga giants

By Pete Jenson At The Nou Camp

Around 20,000 Eintracht Frankfurt supporters took over the Camp Nou and watched their team beat Barcelona 3-2 to knock them out of the Europa League.

Barcelona had taken Europe’s second competition seriously since being knocked out of the Champions League but they were reduced to a laughing stock at times by the ninth best team in the Bundesliga.

It was ‘spot the Barça fan’ pre-match as the official 5,000 away contingent took their seats in the gods and 15,000 more began to fill the rest of the ground. 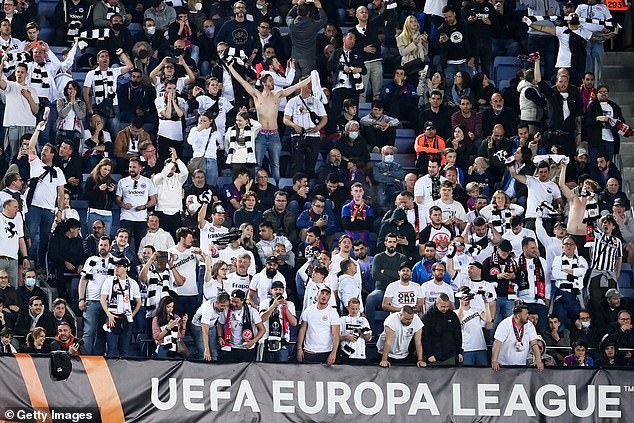 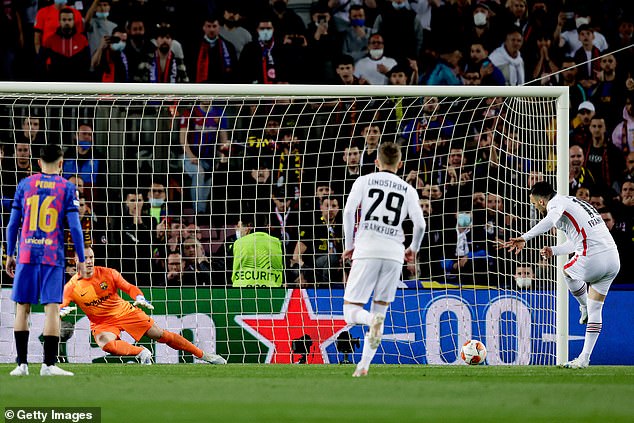 An hour before kick-off thousands of white shirts could be seen dotted all around the 99,000 arena and they roared their own players out for the warm-up and jeered Barcelona on to the pitch.

Part of the six-mile long Avenida Diagonal that stretches through the city had been closed off pre-game to allow the visitors to make their way down to the stadium. And 15 minutes before kick-off it looked like an experiment in no-segregation of supporters.

They had bought tickets from Barcelona fans away on Easter holidays or just snapped up those on offer to tourists, they had brought roads around the stadium to a standstill, blocked the arrival of the Barcelona bus, and taken over the ground once inside.

Soon the domination was on the pitch as well as off it. With no Gerard Pique in the centre of defence Barelona needed a big performance from Eric Garcia but he failed his first test wrestling Jesper Lindstrom down in the area to concede a spot kick after two minutes. Filip Kostic stepped up and sent Marc Andre ter Stegen the wrong way. 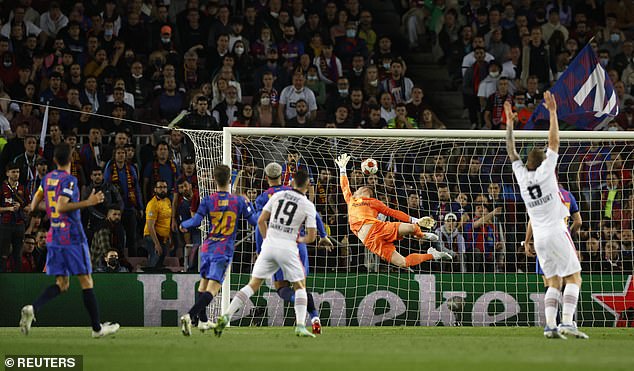 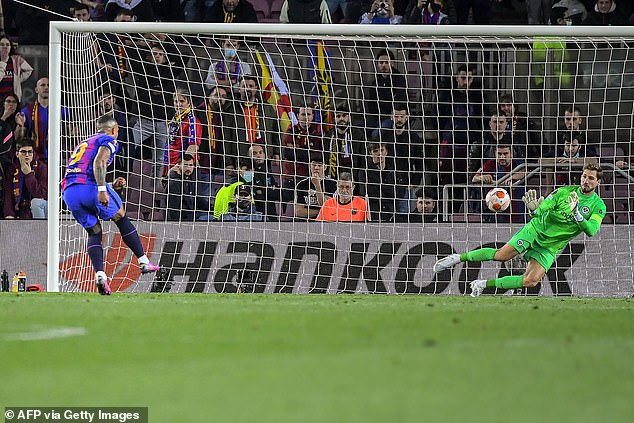 Ousmane Dembele gifted Pierre Emerick Aubameyang an immediate chance to level but he headed just over from five yards out. Kevin Trapp then pushed Ronald Araujo’s volley over the bar. By now the Barcelona supporters were in full-response mode, louder than their guests and Dembele was enjoying himself too beating players and crossing from both right and left but it did not last.

On 37 minutes it was 2-0. Dembele and Sergi Busquets lost possession on the halfway line and when the ball was slipped through to Santos Borre he made the most of a retreating defence to advance to the edge of the area and shoot into the roof of Ter Stegen’s net.

There were Eintracht supporters with their shirts off now waving them above their heads. The stadium announcer warned them to stop lighting flares but there were just as many fireworks on the pitch with every Eintracht attack a threat and both Kristijan Jakic and Ansgar Knauff almost making it three and four.

As Pedri hobbled at half time the numbers began to drop – with 31 per cent of possession Eintracht had managed five shots on goal. Barcelona had only mustered one with 69 per cent of the ball. 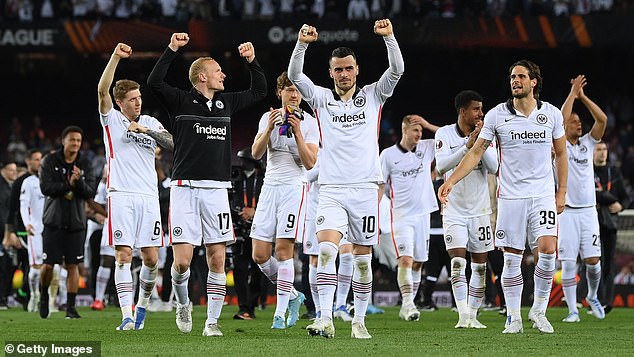 Frenkie de Jong was on at the restart and he immediately sent Dembele down the right. Aubameyang should have converted the cross but missed again from close range.

De Jong’s substitution was not the only change at the break – the Camp Nou’s singing section had left the end behind Trapp’s goal empty. All 5,000 of them were protesting at the way the club had allowed so many away supporters to turn this into an away game.

The club had urged Barcelona members who were not going to be at the game to give up their seats to ensure the stadium was full. It was full all right, just with the other lot’s supporters.

Chaos ensued on the hour when it looked as if Ferran Torres had handled but the referee’s headset appeared not to be working and he had to trot across to speak to the fouth official.

Adama Traore had come on for the misfiring Aubameyang. Oh, and the singing section was full again: protest over. Not that there was anything for Barcelona to sing about on 67 minutes when Kostic shot across Ter Stegen into the far corner and made it 3-0 on the night and 4-1 on aggregate.

Busquets never gave up. He scored one that was ruled offside by VAR and then pulled a goal back with a shot from distance on 90 minutes. There were nine minutes added on, and with 10 minutes of time played substitute Luuk de Jong won a penalty that Memphis Depay scored off the underside of the crossbar.

It was too little far too late. Barcelona were out and will finish the season trophyless – Eintracht will play West Ham having knocked out the favourites on an unforgettable night for their supporters.