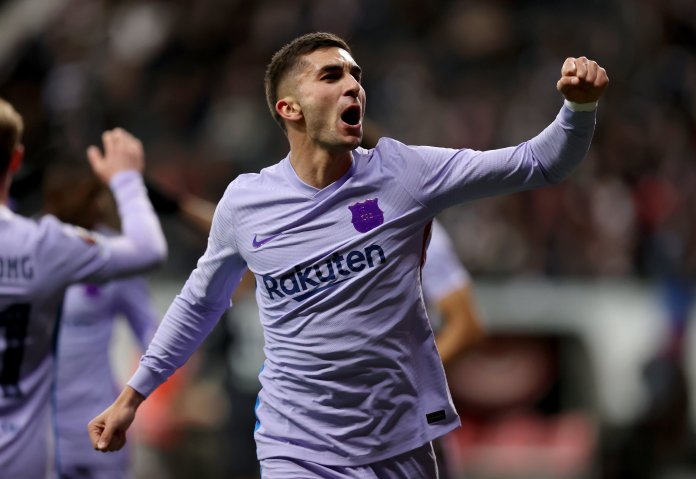 UEFA Europa League Quarterfinal: Ferran Torres rescues Barcelona against 10-men Frankfurt, Barcelona draw QF 1st Leg 1-1: Ferran Torres brought Barcelona back from behind but they could not complete the turnaround with Eintracht Frankfurt down to 10 men. Frankfurt were ruled out a penalty by VAR and later on Tuta was sent off. Ansgar Knauff scored a brilliant top drawer volley which was later on equalised by Ferran Torres. Follow InsideSport.IN for the latest Europa League updates.

Manchester United New Manager: ‘One of the best coaches in the world’ – What Erik Ten Hag’s players have said about him?

Bring on next week! 👊#UEL

Eintracht Frankfurt draw against Barca 1:1 – Ferran Torres rescued a 1-1 draw for Barcelona in the first leg of their Europa League quarter-final against Eintracht Frankfurt, who finished with 10 men. After a goalless first half at Deutsche Bank Park on Thursday, Ansgar Knauff sent the home fans into raptures with a wonderful finish from 20 yards out.

Xavi sent Frenkie de Jong and Ousmane Dembele on in response and the pair started a lovely move that ended with Torres slotting an equaliser into the bottom-left corner. And although Tuta was shown a second yellow card with just over 10 minutes remaining, Barca were unable to complete a dramatic late turnaround to snatch the victory.

Kevin Trapp’s fingertip save kept Torres at bay in the third minute and Djibril Sow failed to hit the target from a great opening at the other end. Barca dominated possession but Trapp denied Pierre-Emerick Aubameyang and they lost Gerard Pique to an apparent groin injury Clement Lenglet replacing him in the 23rd minute.

Eintracht were awarded a penalty shortly before half-time but upon reviewing video footage, referee Srdjan Jovanovic deemed Sergio Busquets had won the ball in his challenge on Rafael Borre.

The hosts took the lead just three minutes after the restart, though, as Ansgar Knauff curled a great strike into the top-right corner from the edge of the box following a corner.

Jesper Lindstrom missed a brilliant chance to double Eintracht’s lead 90 seconds later and it proved costly when De Jong who had only been on the pitch for four minutes teed up Torres to finish off a slick tiki-taka move.

Tuta was shown a yellow card for a lunge on Pedri in the 78th minute but Barca were unable to make their numerical advantage count in the closing stages.

Can Frankfurt down Barca in the 2nd Leg?

After overcoming Inter en route to the semi-finals in 2018-19, knocking out another of Europe’s most prestigious clubs remains a distinct possibility for Eintracht this season.

Although they were unable to become the first German team other than Bayern Munich to beat Barca in a European game since Bayer Leverkusen in September 2001 – the Blaugrana are now undefeated in 22 such matches – they will still fancy their chances at Camp Nou.

He may have missed a great chance early in the second half, but Lindstrom was a real thorn in the side of Barca with his electric pace. He supplied four key passes – more than any other player on the pitch – before being replaced in the 73rd minute.

He has made a strong start to life at Barca but Aubameyang was far from his best in Germany. He only had one attempt on goal across the 90 minutes and completed fewer than half of his passes.

What’s next? – The tie is finely poised ahead of the second leg in Barcelona, and both sides will fancy their chances of making it through to the semi-final. Both teams will have domestic duties first though with the Spanish side travelling to Levante in LaLiga while Glasner’s men will host SC Freiburg, before the teams do battle again in the second leg on 14th April.