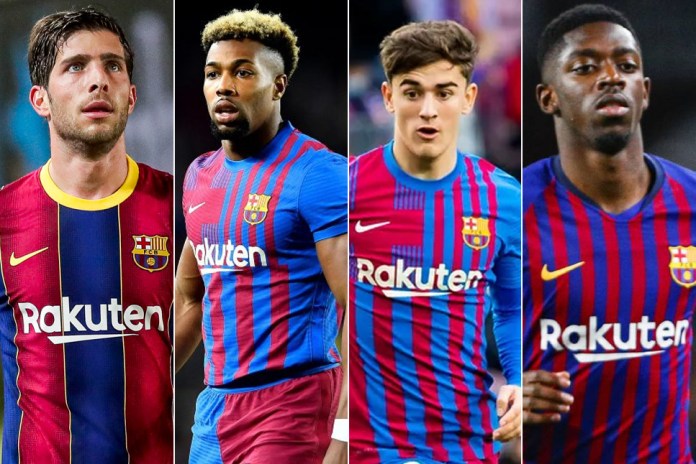 Barcelona Transfer Round-up: Sergi Roberto to sign contract extension – Spanish Giants who have risen from the 9th position in La Liga since Xavi took over are now looking to start the 2022/23 season with a bang. The transfer formalities have already begun with Sergi Roberto set to stay, Adama to leave and priority signing Robert Lewandowski is being discussed. Follow InsideSport.IN for the latest sports news and updates

Barcelona are closing on Sergi Roberto’s contract extension, new deal until June 2023 to be signed in the coming days. 🇪🇸🤝 #FCB

It’s just matter of final details – then time for the official announcement.

Barcelona and Sergi Roberto have finalised the outstanding details of the Catalan’s new contract, which had already been agreed a few days ago. All that was left was to draw up the contracts and iron out the final details, which were definitively closed on Wednesday.

Now, all that remains is the signing and the official announcement, which should come imminently. Sergi Roberto will not be a first-choice player, neither at right-back nor in midfield, and will have to earn his place. This is one of the reasons for the reduction in his salary.

Despite official statements by the two clubs, Barcelona won’t give up on Lewandowski. He’s the priority and Barça would offer him three year deal/two year deal with option. Bayern want to keep Lewandowski as they told his agent in the opening meeting.

Gavi update. Barcelona will meet with his agent in the coming days, probably it will happen this week. New contract will be on the table as Barça plan to keep Gavi has not changed. Gavi wants to stay, talks will now enter into final details to find the best solution.

Barça manager Xavi on Gavi’s future: “I hope Gavi will renew his contract soon. I really want him to be the next one to extend after Araújo”. Gavi has many things to improve, but he is just 17. Gavi is a great soul”, Xavi added.

According to leading and the most reliable transfer journalist Fabrizio Romano, Barcelona have no intention to pay €30m buy option for Adama Traoré. The only way to keep him has always been a swap deal, with no money included in the negotiation with Wolves. As of today, there are chances for Adama to come back at Wolves and then leave again.

Sergio Busquets has been approached by MLS clubs but he already turned down proposals last summer could be an option for June 2023. Busquets’ prepared to stay at Barça next season as Xavi considers him an important part of the project.

May 2nd – Barça director Mateu Alemany tells Movistar: “Ousmane Dembélé and Gavi want to continue here – that’s really important, we’ll do our best for both of them to stay at Barça. We’ve limits for salary budget, as I always say – so we’ve to be careful. We’ll do our best”.

April 28th – Dembélé‘s agent Sissoko and Barça board have decided to discuss again in the coming days. New meeting will take place soon. Feeling was good between the two parties, Ousmane’s taking his time. Barcelona need time to find a solution and improve their proposal for Dembélé.

The 19-year-old has emerged as a key player for the Blaurgana since his 2020 move from Las Palmas, but his time at Camp Nou has been blighted by fitness problems.

Pedri’s latest injury came in Barcelona’s Europa League quarter-final defeat to Eintracht Frankfurt, coming off with a hamstring issue and missing the following four games since.

Mundo Deportivo report that the midfielder will not play at club level again this season and Barça do not want to rush him back. They recognise that Pedri is in need of rest after playing 52 times during his debut season in Catalonia before featuring for Spain at both Euro 2020 and the Olympics.

Barcelona could have a problem with Riqui Puig this summer. The midfielder is not in the club’s plans and they will look for an exit, but the player has always resisted leaving because his desire is to succeed at his hometown club, who he joined aged 14.