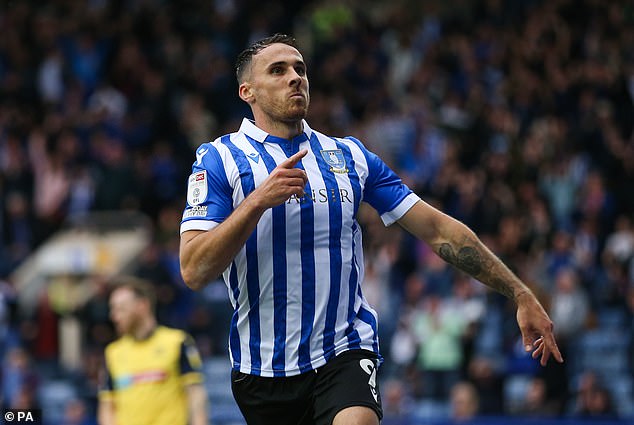 By Tim Rich For The Daily Mail

With even Accrington v Fleetwood postponed because of international call-ups, this was Saturday’s best attended game in English football.

It was a match Sheffield Wednesday badly needed to win.

Covering most of the back wall of the vast Spion Kop is a placard, authorised by the club, that reads: ‘Thank you, Dejphon Chansiri.’ It echoes the banner at the Etihad Stadium: ‘Manchester Thanks You, Sheikh Mansour.’

However, while City’s owner has delivered a flood of silverware, the Thai canned tuna magnate, whose name is everywhere in this great stadium, has overseen only relegation to League One. Gratitude in this corner of north Sheffield is rationed.

Wednesday are still below Wycombe and Rotherham, who went down with them last season, but a goal from Lee Gregory, sliding in to meet an immaculate cross from Jack Hunt, kept them a point off the play-off places.

Wednesday manager Darren Moore had not welcomed this fixture. He was without his regular goalkeeper, Bailey Peacock-Farrell, who was with Northern Ireland, and two of Wednesday’s three centre halves, Dominic Iorfa and Lewis Gibson, who was forced off with injury at the interval, had never played together.

Bolton were convinced Iorfa should have joined Gibson in the dressing room for bringing down Kieran Lee when on a yellow card. ‘They couldn’t get near us with 11 players. Imagine what they would have been like with 10,’ said the Bolton manager, Ian Evatt. It was an argument that flared in the tunnel.

Had Eoin Doyle not missed from a few yards early on, and had Bolton got more than one of their 11 shots on target, this might have been a victory to go with wins at Ipswich and Charlton.

That Bolton did not break through was largely due to Barry Bannan in Wednesday’s midfield. Bannan is 31 and, although he may not have fulfilled the immense promise he showed at Aston Villa, he still possesses wonderful vision, quick feet and a lovely cushioned pass.

With the match long done, Bannan returned to enjoy an impromptu game of football with his young family, the man-of-the-match champagne by the touchline and Chansiri’s face staring down from the Kop.