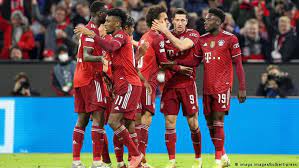 Bayern Munich vs Greuther Fuerth: A home match against the Bundesliga’s bottom side Greuther Fuerth should be just the tonic Bayern Munich need to get out of their worst run
of results for 10 months, although the minnows’ improved form means they should not be underestimated. Follow Insidesport.IN For more updates

It says a lot for Bayern’s dominance of German and European football that the twin results of last Sunday’s 4-2 defeat at Bochum and Wednesday’s 1-1 Champions League round of 16 draw at Salzburg signalled their longest run without a win since April 2021.

But given the high standards at Bayern, who are six points clear at the top of the table and chasing a 10th consecutive league crown, they will be desperate to get back on the path to victory when they host Fuerth on Sunday.

The visitors, playing in the Bundesliga for the second time ever this season, have had an unforgiving return to Germany’s top flight, losing 13 of their first 14 matches while conceding 46 goals.

They finally landed their first win in December, beating Union Berlin 1-0 in what was also their inaugural home victory in Germany’s top flight after failing to win once at home in their debut campaign in 2012/13.

The result proved a turning point and they visit a wobbling Bayern after taking nine points in their last six league games, justifying their decision to keep the faith with coach Stefan Leitl.

Bayern’s hiccup in form has coincided with the absence of goalkeeper and captain Manuel Neuer, who will be out until midMarch following knee surgery.

Leon Goretzka is also out with a knee injury while Alphonso Davies remains sidelined as he awaits further tests after being diagnosed with myocarditis, inflammation of the heart muscle.

Second-placed Borussia Dortmund, who seized on Bayern’s defeat at Bochum by cutting the gap with the leaders to six points, host Borussia Moenchengladbach on Sunday. But they are still without top scorer Erling Haaland, who has been out with a muscle injury since January.

Third-placed Bayer Leverkusen, who trounced Dortmund 5-2 two weeks ago, look to continue their free-scoring form of 14 goals in their last three matches when they visit Mainz on Friday night.

Fourth-placed RB Leipzig visit Hertha Berlin on Sunday hoping to put some daylight between themselves and Hoffenheim, Freiburg and Union Berlin, who are all locked on 34 points in the battle for the final Champions League berth.