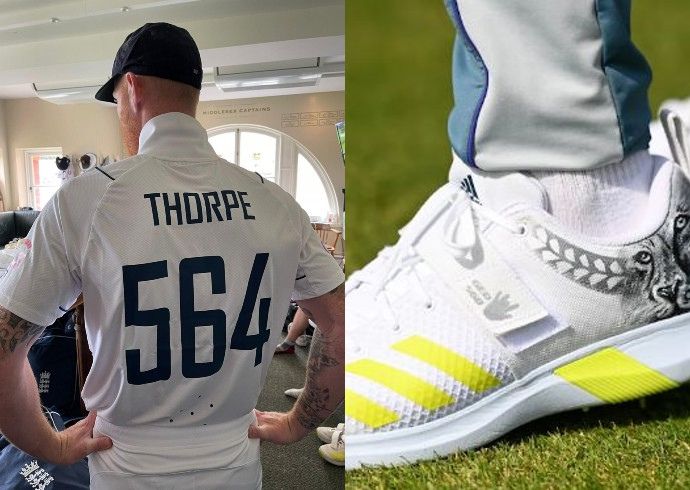 ENG vs NZ 1st TEST: Why did Ben Stokes wore shirt NO. 564 and spotted GED 500 on his shoes? Check REASONS

Our captain has a message as he walks out for his first toss.

Thorpe played exactly 100 Test matches for England between 1993 and 2005 and also worked as a coach with the national team for around a decade, only leaving his role as assistant coach in February following the Ashes. Last month, the Professional Cricketers’ Association (PCA) announced that Thorpe was “seriously ill” in hospital.

“Graham Thorpe has recently fallen seriously ill and is currently in hospital receiving treatment. His prognosis is unclear at this stage and we ask for privacy for him and his family at this time,” read a statement released by Thorpe’s family.

“Our thoughts are with Graham and his family,” Stokes said at the toss.

Stokes paid tribute to Thorpe at the coin toss, wearing an England shirt with Thorpe’s name and cap number (564) instead of the traditional blazer.

England capatin Ben Stokes went through a tumultuous phase in recent times, which saw him lose his father Ged to cancer. Stokes struggled to recover from a broken finger and also took a break from the sport to preserve his mental health.

Stokes had his fair share of struggles in the past couple of years and has put them behind after taking over reigns as skipper.

His trainers featured Ged 500 and his familiar hand gesture where he bends his middle finger at the knuckle and raises it aloft in honour of the finger his father lost during his rugby career.

ENG vs NZ 1st TEST: Why did Ben Stokes wore shirt NO. 564 and spotted GED 500 on his shoes? Check REASONS

Stokes takes over full-time captaincy on a mix Day 1 –

Follow InsideSport on GOOGLE NEWS/Follow All ENG vs NZ LIVE Updates and Scores on InsideSport.IN.