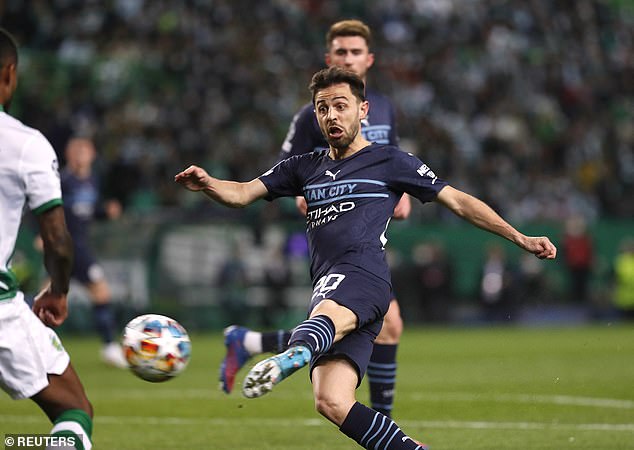 ‘Wonderful technique!’ Bernardo Silva’s terrific half-volley puts Man City two goals to the good against Sporting Lisbon in the Champions League – with even the home supporters applauding the Portuguese’s strike!

With Riyad Mahrez having given City an early lead, Silva was first to the ball after a tussle in the air from a corner and terrifically swept the ball in on the half-volley with his left-foot.

Sporting goalkeeper Antonio Adán got a hand to it but could only divert the ball on the underside of the crossbar, as City took control of the tie early on in the Portuguese capital. 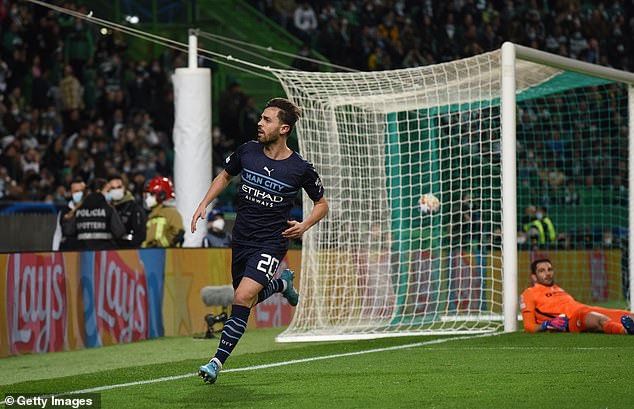 He’s slammed the ball home right on the half-volley! A tricky technique made to look so easy… 🤤

City were 4-0 up at half-time but it was still Bernardo’s strike which had everyone talking, and even had the home fans applauding in the aftermath.

BT Sport co-commentator and former Arsenal defender Martin Keown said: ‘World class, what a finish that is, absolutely top-draw. It’s a half-volley which he comes on to and the speed at which he hits this.

‘He comes onto it on the half-volley, his technique there is absolutely outstanding. What a finish that is! The keeper does well to get anywhere near it. Wonderful technique.’

Former England goalkeeper Rob Green, on Radio 5 Live, also praised the effort: ‘It’s a wonder-strike, a brilliant hit! Some Sporting fans are applauding the strike, it is that good. 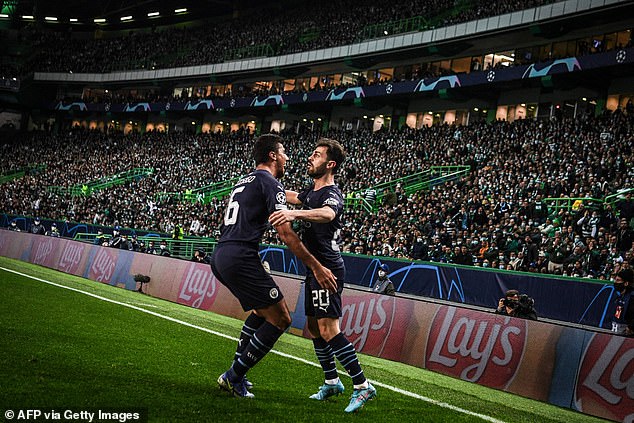 Bernardo’s strike which had everyone talking, and even had the home fans applauding

‘As sweet as you like on the half-volley, on the angle. You just cannot stop one like that in off the crossbar.’

Fans on social media were impressed too, with one saying: ‘The technique to keep that volley down and smash it like that from Bernardo was just too good.

Another said: ‘Bernardo Silva is having an all-timer season. Goals, assists, dribbling, tackling, pressing, he has everything. What a special, special player.’