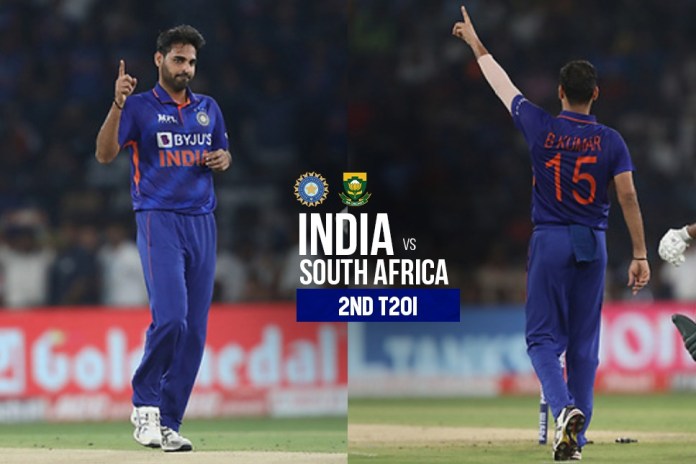 IND vs SA LIVE: India’s pace bowling spearhead Bhuvneshwar Kumar showcased his class on Sunday in the second T20I against South Africa. The 33-year old picked up three crucial wickets in his first spell to derail South Africa’s chase of 149 against India. In the process he also eclipsed Ravichandran Ashwin to become India’s highest-wicket taker against the Proteas in T20is. He finished the match with figures of 4/13 but his efforts were not enough to restrict the visitors as they won the second T20I. Follow India vs South Africa LIVE updates on InsideSport.IN

Bhuvi picks up his third wicket as Rassie van der Dussen is bowled for just 1 run.

After failing to defend 211 in the first T20I on Thursday, India were put into bat yet again in the second T20I. On a difficult pitch to bat at the Barabati Stadium in Cuttack, the hosts only managed to post 148 on the board which was not a par total against the strong Proteas batting line-up.

However, Bhuvneshwar Kumar gave India a perfect start in the second innings as he dismissed Reeza Hendricks in the last ball of the first over with a peach of an inswinger that crashed his stumps.

In his second over, the Meerut-born pacer struck again as he dismissed Dwaine Pretorius, who swung hard only to give a catch to Avesh Khan at deep square-leg. South Africa were reduced to 13/2. With this dismissal, Bhuvneshwar Kumar became India’s leading wicket-taker against South Africa in T20Is as he eclipsed Ravichandran Ashwin.

Bhuvneshwar’s wickets prompted skipper Rishabh Pant to give him one more over with the new ball and the move paid rich dividends as he dismissed Rassie van der Dussen with yet another peach of a delivery that went on to hit the top of off-stump, reducing the visitors to 29/3.

However a 64-run partnership between Temba Bavuma and Heinrich Klaasen and then a 51-run stand between Klaasen and David Miller had victory in sight for South Africa. With just 5 runs needed off the last three overs, Bhuvneshwar came in to bowl his last over and he picked up his fourth wicket by dismissing Wayne Parnell and conceded just 3 runs in the over. The visitors however clinched victory in the next over to go 2-0 up in the series.

Bhuvneshwar now has 13 wickets in 8 matches against the Proteas which is the most by any Indian bowler. Ashwin had taken 10 wickets in six matches. With this performance, Bhuvneshwar has bounced back after a forgettable outing in the first T20I, where he conceded 43 runs in 4 overs.