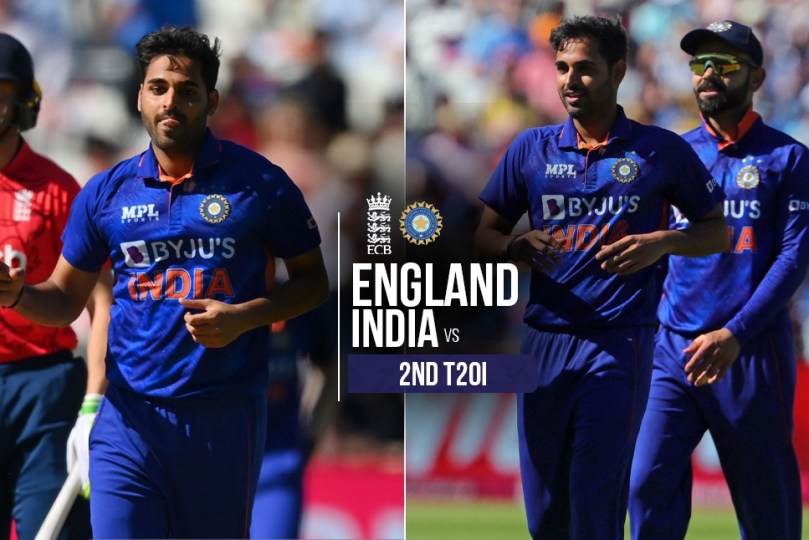 IND vs ENG LIVE: 2nd T20I Birmingham- Following his side’s thumping 49-run win over England in the second T20I, Indian pacer Bhuvneshwar Kumar said that he goes for an attack when the ball is swinging. Follow India tour of England updates on InsideSport.IN

Indian pace attack led by Bhuvneshwar Kumar and Jasprit Bumrah feasted on English bowlers and delivered tight bowling performances to help the visitors clinch the T20 series after bundling out England for 121 runs within 17 overs in the second T20I here at Birmingham on Saturday.

England had an extremely disappointing day with the bat. The highly-attacking batting line-up could not live up to its hype again, fizzling out in front of Indian pacers. Indians moved on from their slightly-off batting performance in the first half to bundle out hosts for 121 and capture the series.

Only Moeen Ali (35) and David Willey (33*) could put up some decent scores next to their names. The foundation for this amazing exhibition of bowling was laid by Bhuvneshwar Kumar in the powerplays.

England pacers, led by Richard Gleeson and Chris Jordan, dominated the Indian batters in the second T20I here at Birmingham as Men in Blue posted a competitive 170/8 in their 20 overs, with efforts from captain Rohit Sharma (31) and Ravindra Jadeja (46*) proving extremely valuable for the visitors.

“If it swings, I go for attack only. Batters attack on a flat track. Both matches had swing and I attacked. This increases the chance of getting wickets. When it swings it is tempting. You want to bowl one inswing then one outswing. But you have to control yourself and focus on one line,” said Kumar during a press conference.

The pacer admitted that he does not know if he is swinging the ball or if conditions are helping, but nonetheless is glad that the ball is swinging.
“I was surprised that ball was swinging for a long time, especially in T20I cricket and there is a bit of bounce on the wicket,” he added.

Kumar revealed that negative thoughts did not cross his mind while dealing with injuries.
On whether he is looking forward to playing Test cricket, the pacer said, “Honestly I am not thinking about anything at the moment. Of course, I would not say a ‘no’ when I get opportunities in Tests. Whatever opportunities I get I try to do well.”

He said that he is not surprised that his side has clinched the series 2-0 and admitted that it would be great if India is able to hand over a 3-0 series defeat to England in their country.

Read more- IND vs ENG LIVE: Virat Kohli&#8217;s T20 return marred by another failure, is it END OF THE ROAD for the former India captain?

Coming to the match, chasing 171, England got off a terrible start as they lost their opener Jason Roy at the very first ball of the innings. Roy edged a ball bowled by Bhuvneshwar Kumar straight in the hands of captain Rohit Sharma at the slips.

This brought Dawid Malan to the crease. Skipper Jos Buttler was next to depart for four, dismissed by Kumar and caught by wicketkeeper Rishabh Pant. England was two down for 11 runs.

Liam Livingstone was next up on crease, he looked good, hitting Bhuvneshwar for two fours and Hardik for a four in the next. But Jasprit Bumrah cut short his stay at the crease to just nine balls, in which he could score just 15 runs.

At the end of powerplay in six overs, England stood at 36/3, with Harry Brook (4*) and Malan (13*).
Harry Brook was next up on the crease, looking forward to building a stand with his partner Malan to steer his side out of trouble. But he could not last long either, as a catch from Suryakumar Yadav at long-on off a Yuzvendra Chahal delivery sent him back to the pavilion for six. This brought Moeen Ali to the crease.

Fourteen runs later, Chahal got another wicket in form of Malan for 19 after the batter was caught by Harshal Patel. At this point, half of the England team was back in the hut for 55 runs. Sam Curran was at the crease after this wicket.

At the end of 10 overs, England was in a scary situation, with 59/5 at the board with Moeen Ali (9*) and Sam Curran (2*).
Curran was next up and dismissed within a space of six balls for just two runs. Bumrah took the wicket, with Hardik Pandya assisting him with a good catch. David Willey arrived at the crease next.

David Willey and Moeen Ali now had to save England from utter humiliation. They kept the scoreboard moving for a while. Moeen Ali in particular played some fine shots.

Their 34-run stand was cut short after Moeen Ali was caught by captain Rohit at mid-off for a valiant 35 off 21. Hardik Pandya had got his first wicket of the match. With this wicket, England starred at a defeat with 94/7 at the board. Chris Jordan was run out by the duo of Chahal and Rohit for just one. England was now running short of proper batters, eight wickets down at 95 runs.

Bhuvneshwar Kumar delivered a struggling England with their ninth blow, as Richard Gleeson was dismissed with assistance from Virat Kohli’s safe hands near long-off region.

The final man in was Matt Parkinson. The match was now a mere formality for Indians, with England just looking to put a respectable reply to the chase on the board. They could take England to 121 runs before it ran out of batters, with Harshal Patel delivering the final nail in the coffin by dismissing Parkinson for a duck. Willey was left unbeaten at 33*.

Put to bat first by England, Indian batters maintained the aggressive intent in their batting from the first match, but English bowlers took advantage of it by making the opponents go for rash shots and losing their wickets. Chris Jordan (4/27) and debutant Richard Gleeson (3/15) were the best bowlers for England. Contributions from skipper Rohit Sharma (31), Rishabh Pant (26) and Ravindra Jadeja (46*) proved to be the highlights of the Indian innings.

Put to bat first by England, India was off to a good start. Wicketkeeper-batter Rishabh Pant accompanied Rohit Sharma as an opener. The duo maintained good running between the wickets and were dealing in fours and sixes, with the captain Rohit being more aggressive of two.

The 49-run stand between the duo was over after debutant Richard Gleeson got his maiden T20I wicket in form of the Indian skipper for 31 off 20 after a top edge off Rohit’s bat went straight into the gloves of wicketkeeper Jos Buttler.

Virat Kohli was next up on the crease. Pant struck spinner Moeen Ali for a four and six in the sixth over, taking India to 61/1 at the end of their powerplay, with Pant (26*) and Virat Kohli (1*).
The next over started on an amazing note for Gleeson, as he got both Kohli and Pant for 1 and 26 respectively in the first two balls of the over. Gleeson in his debut had taken the wickets of three of India’s biggest batting stars and turned the match in his side’s favour. India was 3 wickets down at 61 runs.

The duo of Suryakumar Yadav and Hardik Pandya joined hands to revive India’s innings. The duo looked really good, hitting some shots crossing the boundary line. At the end of 10 overs, India was at 86/3, with Pandya (9*) and Yadav (15*). Their budding partnership was cut short at 28-runs after Yadav was dismissed for 15 by pacer Chris Jordan after the batter was caught for 15 by Sam Curran at deep midwicket while attempting to pull a length ball.

Hardik Pandya was also caught by Dawid Malan for just 12 on the very next ball at the backward point, sounding an alarm for Indians, who had lost half of their batting lineup for 89 runs.

Ravindra Jadeja and Dinesh Karthik were on the crease, with a responsibility to take India safely through the second half of the innings. The duo kept the scoreboard moving for a while, but Karthik was run out for 12 off 17 by keeper Buttler, reducing India to 122/6, ending a 33-run stand between the duo.

Harshal Patel joined Jadeja on the crease. Patel tried to add some acceleration in the innings, hitting a four and a six but was caught by Gleeson for 13 while trying to hit the ball over deep third man. Chris Jordan had captured his third wicket of the match, downing India to 145/7.

Bhuvneshwar Kumar joined Jadeja on the crease. Jadeja kept going for India till the very end, taking them to a competitive total. Kumar was dismissed soon.