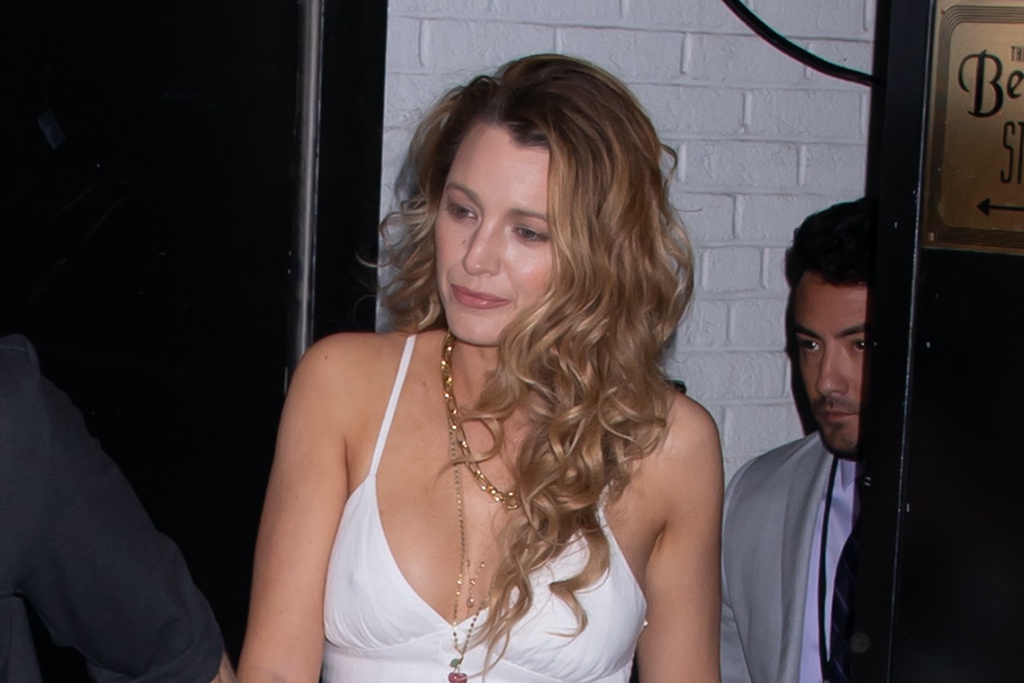 Blake Lively stepped out in style to support her close friend Taylor Swift this week. The actress appeared with husband Ryan Reynolds at the singer’s “All Too Well” short film screening, debuting at the Tribeca Film Festival’s “Tribeca Talks” series on Saturday.

For the occasion, Lively attended the event at the Beacon Theater with Reynolds in a lightweight white Reformation dress. The number — bearing remarkable similarity to Swift’s 2008 album cover and dresses worn during her “Fearless” era — featured a sleeveless silhouette with thin straps, a deep neckline and a tiered skirt. For a bohemian twist, Lively layered numerous gold necklaces and bracelets together. Completing her outfit was a cream leather Gucci “1955” handbag. Meanwhile, Reynolds was dapperly dressed in a black camp-collar shirt with navy trousers, white leather sneakers and beaded multicolored bracelets made by their children.

In a more concrete wardrobe swap, Swift wore an archival blue pinstriped vest and suit trousers by Ralph Lauren during the screening’s panel — the very same ensemble that Lively wore in her 2018 film “A Simple Favor.”

When paired together, the pieces’ bohemian eclecticism created a remarkably similar look to Lively’s “GG” character, Serena van der Woodsen, that could have been styled by costume designer Eric Daman himself.

Embellished pumps have soared in popularity in recent weeks for their statement-making appearance. Pointed-toe styles with platforms, stiletto or block heels have become top choices from their ability to add a burst of texture through accents like studs, crystals or glitter — as seen in new styles by BCBGMaxAzria, Jimmy Choo and Betsey Johnson. Bold pumps from Mach & Mach, Gianvito Rossi and Amina Muaddi have also been worn by stars including Dua Lipa, Vanessa Hudgens and Nicky Hilton in recent weeks.

When it comes to fashion, Lively has a penchant for glamour. On the shoe front, she often wears pointed-toe pumps, lace-up boots and strappy sandals by Louboutin, Alaïa, Tory Burch and Valentino. When off-duty, she prefers sneakers by Nike, Allbirds and Vans. The “A Simple Favor” actress has been a longtime fashion fixture, stemming from her glamorous style and close designer friendships. Lively previously served as the face of L’Oreal and Gucci’s Gucci Premiere perfume, as well as Chanel’s Mademoiselle handbag line, in the early 2010s. She’s also a front row regular at Fashion Month, appearing at shows for Michael Kors, Gucci and Dior, among others.

Discover Lively’s hottest shoe moments over the years in the gallery.