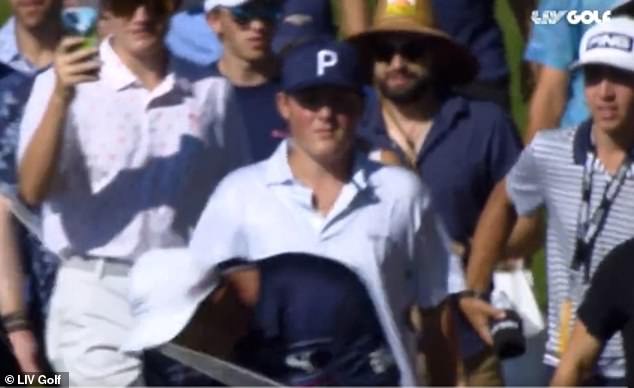 Bryson DeChambeau walks face-first into a guide rope at LIV Golf Chicago in a bizarre moment, with the American claiming ‘I can’t see out of my right eye’ before finishing up in eighth place

Bryson DeChambeau suffered an unfortunate and bizarre injury on Sunday at LIV Golf Chicago, with the American failing to duck under a rope and bouncing it off his face instead.

The injury happened after he hit his approach on the 14th hole.

In a video of the incident, which happened during the final round of the tournament, DeChambeau can be seen next to his caddy, who lifted up the rope so the 29-year-old could clear it more easily.

But despite glancing at the rope before attempting to go underneath it, DeChambeau bounces his face squarely on the cord, sending his head flying backwards and taking his hat off of his head.

The golfer was clearly in pain after the accident as he crouched down and held his face, and vented through the discomfort.

‘Oh my God, what the f—k guys?’ he said after hitting his face.

Despite the unfortunate injury, DeChambeau ended the hole strong, later sinking a putt to make birdie.

For the weekend, DeChambeau finished tied-eighth in the tournament at -6 alongside Phil Mickelson, Chase Koepka and Laurie Canter.