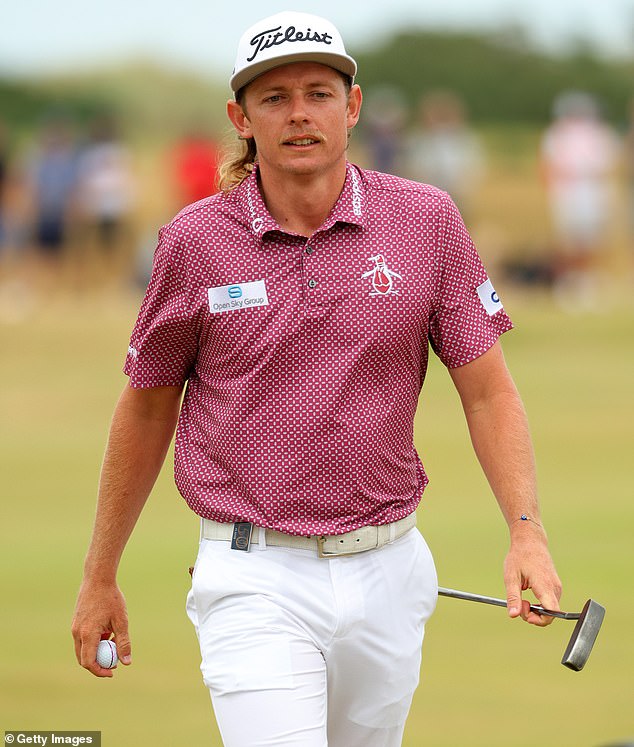 In two weeks, Australian golfer Cameron Smith will announce he is joining the rebel LIV series, pocket $140million and bring about the biggest revolution in the game’s history.

So says someone who should know.

In 1995 John Ribot was the driving force behind Super League, the rebel competition that tore the game of rugby league apart.

Now, 27 years later, he can look at what is happening in golf and see striking similarities between what he went through back then and what LIV front-man Greg Norman is encountering now.

Ribot, a former Test and Queensland Origin winger who at the time was CEO of the Brisbane Broncos, was cast as the villain by the game’s traditionalists in the so-called Super League War.

Just like Norman – who has been criticised by the likes of Tiger Woods, Rory McElroy and Jack Nicklaus and not invited to the 150th anniversary celebrations of the British Open despite winning the event in 1986 and 1993 – Ribot was snubbed by former friends and teammates before the game came back together.

Australian golfer Cameron Smith is reportedly poised to announce he is joining the rebel LIV series, pocketing a cool $140million for making the controversial switch 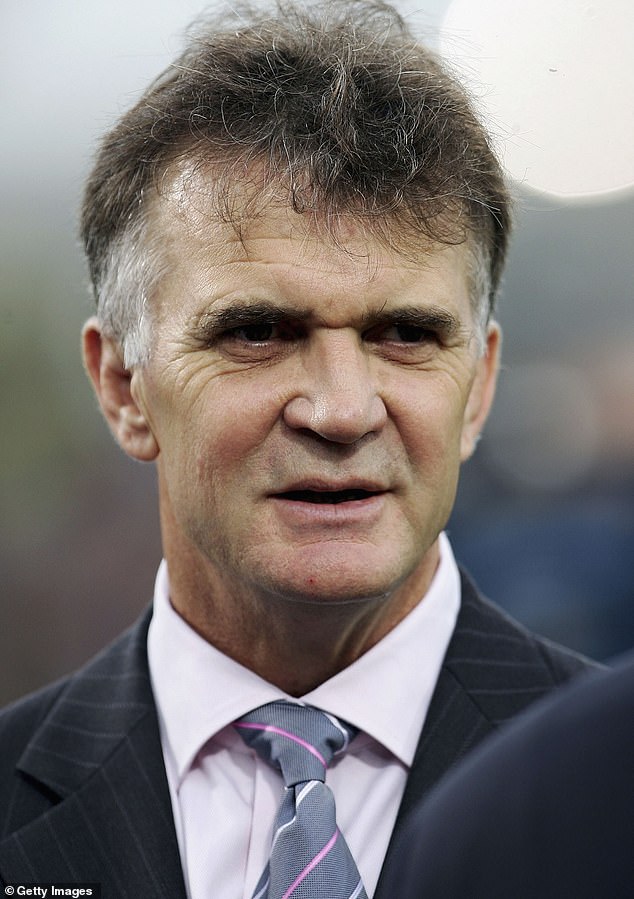 The golf traditionalists have taken the moral high ground over the fact that the LIV series is bankrolled by the seemingly unlimited billions of the oppressive Saudi Arabian regime.

The Super League War was fought on a similar idealistic battlefield, with old school rugby league supporters adamant that their ‘people’s game’ should not be run by a corporation – Rupert Murdoch’s News Corp.

After a bitter and costly split, the two warring sides came back together, just as they did in 1979 when the game of cricket was divided over the formation of Kerry Packer’s World Series Cricket – and as they will inevitably in golf, according to Ribot.

‘We had two organisations spending huge amounts of money trying to gain control of a sport,’ he said. ‘The same thing is happening now.

‘I remember thinking at the time, “The only way this is going to end is if the two of them sit down and make a deal,” and that’s what happened. The two lions sat down and worked it out face to face.

‘It had to happen because we were running two separate competitions for a season and that couldn’t keep going. It was costing a fortune and the returns weren’t there because the market had shrunk. It all comes back to the consumer, and they want quality. They want to see the best players playing against the best.

‘If you split the competition into two and put half of the good players in one tournament and half of them in the other, the consumers will switch off. They’ll find something else to watch.

‘That’s what will happen in golf. You have to attract those sets of eyes. When people turn on the Masters or the British Open, they want to see the very best players in the game.

‘Eventually both sides will have to sit down and work out a deal. It has to happen.’ 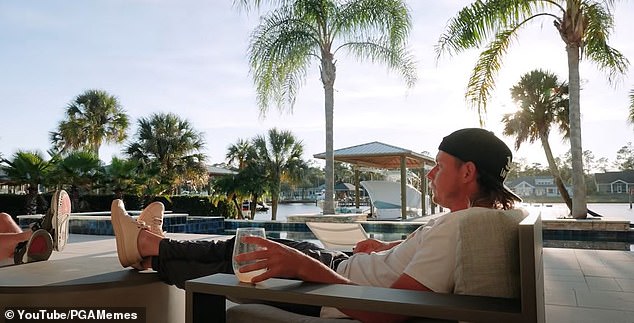 And one of the main catalysts will be Cameron Smith.

The PGA could handle losing some big names in the twilight of their careers, such as LIV signings Lee Westwood, Graeme McDowell and Ian Poulter. They could even absorb the loss of divisive characters like Phil Mickelson, Patrick Reed and Bubba Watson.

Others, such as youngsters Blake Windred, Ian Snyman and amateur David Puig could be said to be just making up the numbers.

But Smith is different.

Ranked number two in the world, current British Open champion after a brilliant final round at St Andrews last month and possessing the best short game in golf, he is arguably the hottest player in the game.

More than that, he is something that not many golfers can boast. Cam Smith is cool.

The Ultimate Golf YouTube video showing his waterfront Florida home with its man-cave complete with gigantic TV screen, bar and F1 driving simulator; Audi wagon and Nissan GT-R (with ‘Hoonigan’ written on the back air foil) sitting on the driveway and two boats tied to the dock, has been viewed over 1.5 million times. Spanning 5,350 square feet on a .55-acre lot, the layout at Smith’s luxury pad includes an open-plan living, kitchen and dining area that is ideal for throwing parties (pictured) 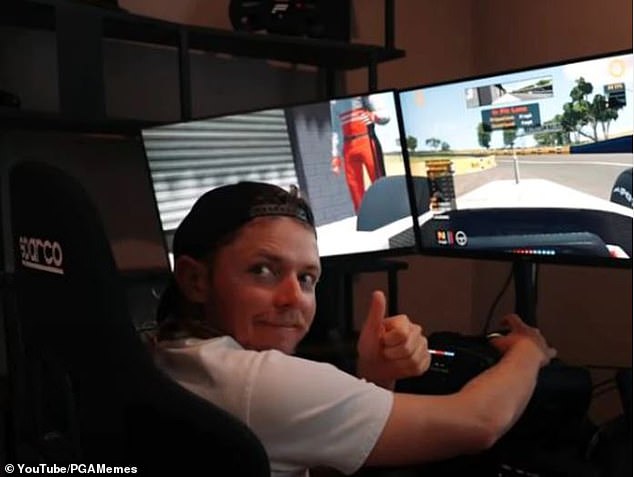 When guests stop by at Smith’s Florida mansion, there is a built-in bar as well as an al-fresco lounge area with palm trees, a race simulator (pictured) as well as a grilling space and a huge television outside

With his baseball cap on backwards hiding the best-known mullet in sport and sporting a moustache which doesn’t seem to know whether to grow or stop trying, Smith looks a lot younger than his 28 years and that is what makes him so dangerous to the PGA.

Asked by interviewer Travis Miller in the YouTube video if there was a player who attracted him to golf when he was a youngster, he didn’t hesitate.

‘Anyone growing up in Australia who was around my age just wanted to be Adam Scott,’ he said. ‘He was obviously good at golf, but he had the good looks, the charm … he’s my biggest man-crush of all time’.

Ironically, when Scott was asked the same question early in his career, he gave a similar answer, but his role model was Greg Norman.

Smith is currently playing that Pied Piper role to the next generation of golfers around the world, which is why LIV is reportedly paying US$100 million for his signature.

‘We were in a similar situation at Super League,’ Ribot said. ‘We needed good players, but we also needed players who had a big following. If you get them, their fans come with them.

‘For us that player was Andrew Ettingshausen. He was like a rock star with the kids and female market. Getting him to sign was huge for us.’ 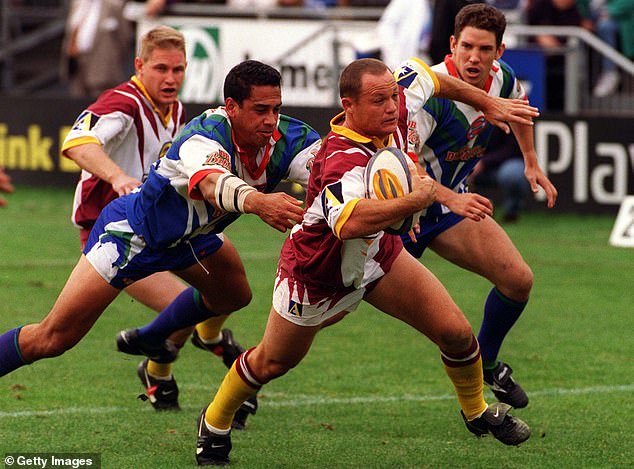 Ribot believes Smith’s defection will be the reality check the PGA needs.

‘As I understand it, the PGA wants to control the players and hold all the tournaments in the US. The other organisation wants to take the game to the world.

‘Isn’t that a good thing? Golf is a game played by millions of men, women and children around the world. Why shouldn’t there be a PGA tournament in China or India or Australia?

‘That was part of the vision for Super League, to take rugby league to the world. People say it didn’t happen but look at how strong the game is now in the UK and the Pacific Islands. That was all because of Super League.

‘The same thing will happen in golf. It might take a few years, but the two sides will come together. It is going to be the best thing for the game, and the fans.’ 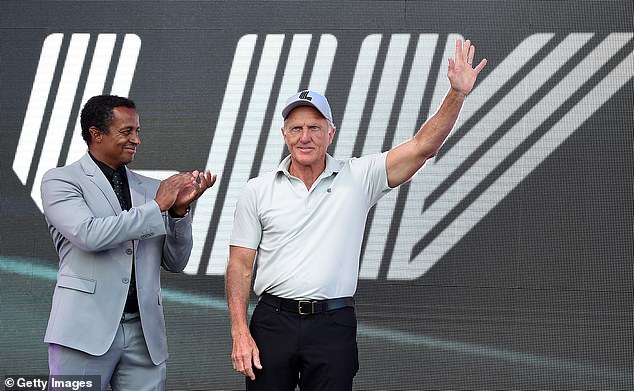 Recruiting Cameron Smith would be a huge coup for Norman, who was barred from attending celebrations for the 150th Open at St Andrews due to his CEO role with LIV

And, no doubt, the players. The Super League war saw average first graders being offered 10 times their salaries to sign with one organisation or the other. The top players became multi-millionaires overnight.

Ribot believes Smith will be unable to resist the king’s ransom reportedly being offered and is only waiting until the finish of the PGA’s season-ending Tour Championship on August 28 to announce his defection.

‘They are talking around $140million Australian,’ he said. ‘That’s life changing. It’s insurance. Golf isn’t like rugby league where you can get hurt in a tackle and your career is all over, but anything can happen. You can get a back injury or have a car accident like Tiger Woods. You can get the yips.

‘At 28 years-old to get offered that sort of money…he’ll take it, and who can blame him?’

Apart from Tiger Woods, Rory McElroy and Jack Nicklaus, that is.