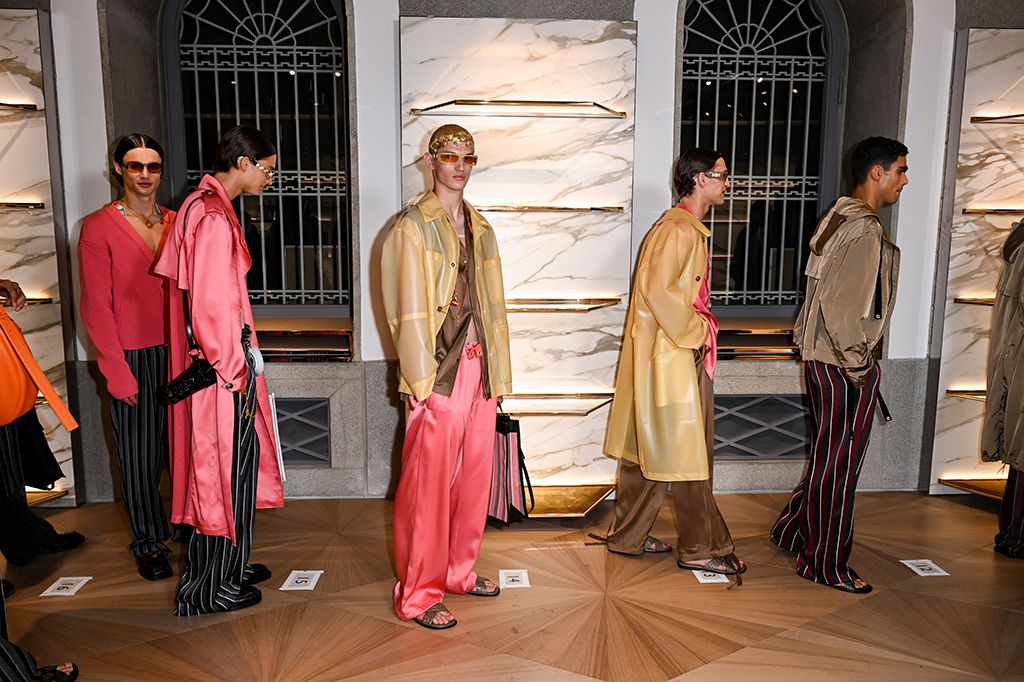 John Idol, chairman and CEO of Capri Holdings, laid out plans for the future of the company’s three brands – Versace, Jimmy Choo, and Michael Kors – as he marked Capri’s successful transformation into a global luxury fashion group.

At an Investor Day in New York on Wednesday, Idol reviewed the company’s strategic pillars for the furture which include maximizing the full potential of each brand while creating the “most innovative and exciting fashion luxury product” led by the design visions of Donatella Versace, Sandra Choi and Michael Kors.

Idol also said Capri will be working to deepen consumer desire and engagement with each of its luxury houses through “exciting” and “impactful” communication, as well as using omnichannel capabilities to accelerate its revenue growth.

“Five years ago almost to the day, we announced our intent to become a global luxury fashion group,” Idol said. “I believe we have successfully made that transition. We decided to move from a mono brand to a multi-brand portfolio company with an emphasis on luxury because luxury companies have historically had consistent growth over multiple years.”

Idol, who took the reins of Michael Kors in 2003, built the designer brand into a major business and then bought Jimmy Choo in 2017 and Versace in 2018, when the company was renamed Capri.

Over the long term, Michael Kors’ revenues are projected to increase by just over $1 billion to $5 billion as Versace is seen adding another $900 million to $2 billion and Jimmy Choo is expected to add $387 million to hit $1 billion.

Part of this will be done by focusing on store growth. Capri CFO and COO Thomas Edwards noted during the Investor Day that Capri aims to reach 1,400 stores in total across brands in the long term. “For Versace and Jimmy Choo, we continue to expect 300 luxury stores over time,” Edwards said. “And for Michael Kors, we now anticipate 800 stores. This reflects a significant growth opportunity in Asia, better performance in the Americas as we saw over the last years, and we’ll continue to selectively optimize our fleet.”

The company plans to spend $300 million annually to support growth and strategic initiatives. Over half of this will be spent on stores, Edwards noted. “This spending includes both new store development as well as renovations,” he added. “We plan to continue strong investments in digital technology, supporting the $1 billion-plus growth in e-commerce. And continue to expand our e-commerce and analytics capabilities across all our brands as well as enhance our omnichannel capabilities.”

By brand, Versace CEO Cedric Wilmotte told investors on Wednesday that the Italian luxury label’s objective is to build a $1 billion accessory business while continuing to increase the growth of its footwear business to $300 million. “Our footwear strategy stands on innovation while continuously refreshing and reinforcing the iconic styles,” Wilmotte said. “We also have a very strong sneaker business, and I’m proud to say that we’ve just launched the new Odissea earlier this month.” Wilmotte also noted that the Trigreca and Greca sneakers as top performers.

Jimmy Choo CEO Hannah Colman said the brand will be capitalizing on its casual footwear opportunity. “We will double this business in the short term by reinforcing our product offer and leveraging brand codes in this segment,” Colman said. “We have a significant opportunity to grow sneakers to be at least 25% of footwear sales. Beyond sneakers, we have the opportunity to build on our casual boot assortment as we reinforce our authority in off-duty boots, such as our iconic combat silhouette, one of which you see up here. Additionally, we’re expanding our casual footwear offer with new functions such as pool slides, rain boots and snow boots.”

As for Michael Kors brand, Idol said that the company plans to raise prices and raise the quality of the product while reducing the SKUs inside the company by a “significant amount.”

To date, the reduction has been over 30%, Idol said. “We wanted to deliver better product, more focused and create an exciting engagement with the customer,” he added. “And that has clearly happened for us.”

Idol also mentioned that Michael Kors has a “very strong” footwear business and plans to reset store formats to increase the footwear presentation to create a much more luxurious and larger environment for its shoe assortment. “Our goal is to take footwear from its current $500 million today to $750 million,” Idol said.

Men’s is also an opportunity for Kors, as Idol believes the brand is “underpenetrated” in the category and has a growth potential of $200 million over time.

The company is also planning a new 14,000 square foot Michael Kors flagship in New York City at an unannounced location. London will follow afterwards with a similarly sized flagship. Milan is the last to open, joining other flagships in Paris, Madrid, Dubai, Tokyo and Shanghai.

Pressed by investors in a Q&A during the event on Wednesday about future acquisitions, Idol said if it happens, he is willing to pay up to get the right brand.

“I recall many people being surprised at what we paid for Jimmy Choo [$1.2 billion] and for Versace [$2.1 billion],” the CEO said. “I want to remind everyone, in the luxury business, that’s what you pay. If you don’t pay that, someone else will pay. So it doesn’t really matter whether you like it or not. That’s what the price is.

“We do believe that there will be some three companies over the next two to five years that will be available,” he said. “Most of them are privately owned luxury businesses in Europe.”

The idea would be to buy a company with at least $500 million in revenues and the potential to get to at least $1 billion.

But for now, Idol is clearly most interested in building at home. “We have $2 billion of opportunities sitting in front of us, and we think to stay focused on that will provide tremendous upside,” he said of the current business.