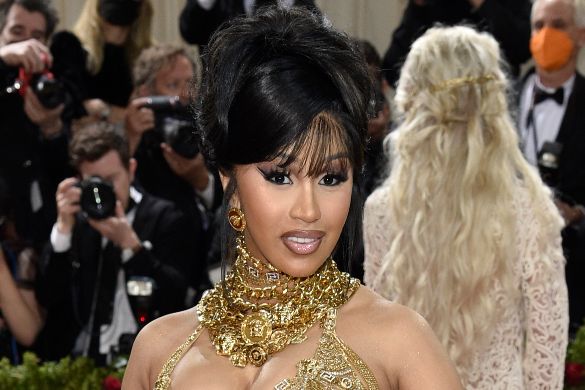 Cardi B arrived at the 2022 Met Gala tonight in New York dripping in gold from head to toe.

The rapper brought the Gilded Age theme to life in a a custom Versace gown, which she wore matching arm warmers and a neck accessories that created the appearance of dozens of necklaces layered on top of one another. This marks her first appearance at the Met Gala since 2019, when she wore a burgundy gown with an opulent train and matching head piece.

To Monday’s event, Cardi B walked the red carpet alongside Donatella Versace. Cardi’s plunging gown was covered entirely in gold chains, many of which featured the Versace logo, as well as large Medusa pendants, which are a signature of the brand.

In a continuation of the look, the rapper is wearing arm and neck accessories that are made to look as though there are layers on layers of gold chains cascading down her body. Of course, she also wore Medusa pendant earrings to top it all off.

For her hair, Cardi wore a stunning bouffant-style up-do with side-swept bangs. As for makeup, she wore a nude lip with sweeping eyeliner and glittery lids.

The 2022 Met Gala’s theme is “In America: An Anthology of Fashion,” exploring the foundations of American fashion — specifically, identifiers of American style and individual designers. The exhibit will include 100 garments by independent designers and dressmakers from the 1800s to the mid-late 1900s in the Museum’s American Wing period rooms. There will also be “freeze frames” of film vignettes in each room, highlighting the aesthetics of eight different film directors: Janicza Bravo, Sofia Coppola, Julie Dash, Tom Ford, Regina King, Martin Scorsese, Autumn de Wilde and Chloé Zhao. Supported by Instagram and Condé Nast, the event raises funding for The Costume Institute’s exhibitions and future improvements. The exhibit will be open to the public starting on May 7, and — along with Part 1, which opened last September — close on Sept. 5, 2022.