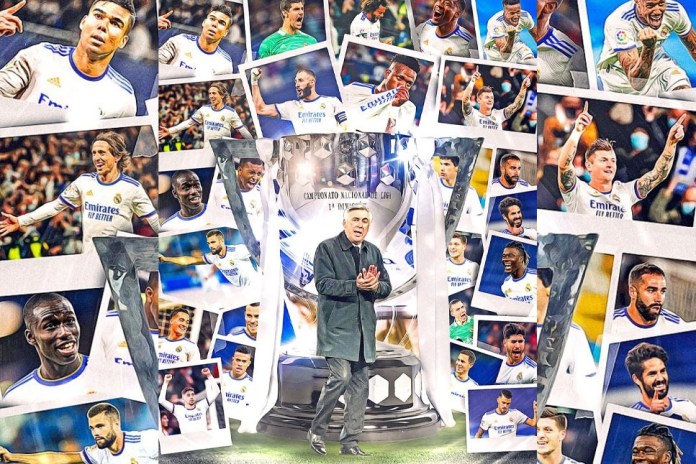 Carlo Ancelotti becomes the first manager ever to win all five of Europe’s top leagues:

What an incredible achievement 🐐 pic.twitter.com/kgHKJ0zYWn

The collective stumbles of Sevilla and Barcelona left the title returning to the Santiago Bernabeu an inevitability.

It has great significance for Carlo Ancelotti, who in his second spell as coach now has his first LaLiga title and is the first boss to win each of Europe’s top five leagues, having also won the Premier League, Serie A, Ligue 1 and Bundesliga.

Madrid sealed the Liga crown on Saturday with a 4-0 win over Espanyol – two goals from Rodrygo brace and further strikes from Marco Asensio and Karim Benzema getting them over the line with four games to spare.

While it was a historic day for the club, it also marked a major personal triumph for their manager.

Which league titles has Ancelotti won?

Ancelotti won the Serie A title with AC Milan in 2004, a year after he led his side to Champions League glory.

It is perhaps surprisingly the only league title he has won in his native Italy, with Ancelotti’s next top-flight crown coming during his spell with Chelsea, as he steered the Blues to Premier League success in 2010.

In 2013 he would go on to claim Ligue 1 with Paris Saint-Germain before securing Bundesliga title glory for Bayern Munich in the 2016-17 season.

Now, in his second spell as Real Madrid head coach, he has been able to get his hands on the Liga trophy, with Los Blancos claiming the league title with four games remaining.

How many trophies has Ancelotti won in total?

Ancelotti has now won 22 trophies in total during a remarkable managerial career which has spanned more than 25 years.