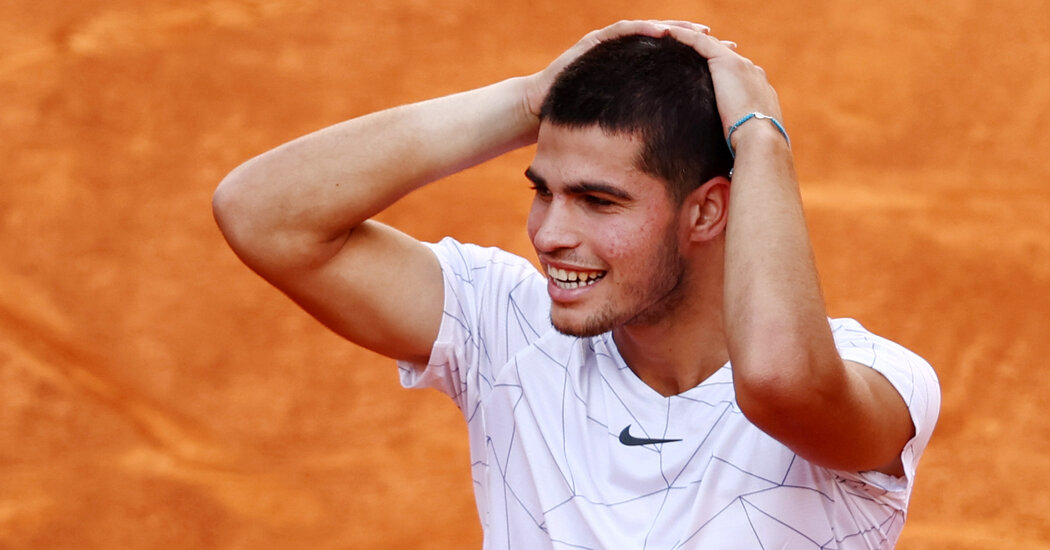 ROQUEBRUNE-CAP-MARTIN, France — Carlos Alcaraz of Spain was walking to a series of television interviews at the Rolex Monte-Carlo Masters here last month when something stopped him in his tracks: A Maserati MC20 on display.

Cars have become a passion for Alcaraz, even though he didn’t obtain his driver’s license until this year, well past his 18th birthday. The 15-minute test, Alcaraz admitted, was “really, really tough. I was really nervous, and I was sweating.”

When it comes to choosing his own dream car, Alcaraz said he would shun a sports car for a more practical sport-utility vehicle, even if it were the $200,000 Lamborghini Urus. With more than $5 million in career prize money, as well as income from endorsement deals, he can have whatever car he wants.

On the court, Alcaraz revs his own engine by bellowing and pumping his fists after hard-won points. He can quickly cover the court both side to side and from behind the baseline to the net. His shot selection is staggering, with drop shots hit so deftly that opponents are left to stare in disgust.

A year ago, Alcaraz hovered on the verge of the top 100 men’s players in the world and was forced to play three qualifying matches to reach the main draw of the French Open. This year, he enters the event with a career-high No. 6 ranking after winning four ATP titles in the last four months.

With his win in Barcelona on April 24, Alcaraz became the youngest player to crack the world’s top 10 since his countryman and idol, Rafael Nadal, did so by winning the same tournament, on the same day, in 2005. Alcaraz followed it up by winning his second ATP Masters 1000 in Madrid — his first was the Miami Open in April — becoming the first player to beat Nadal and Novak Djokovic back to back on clay. Heading into the French Open, Alcaraz has a 28-3 record on the season.

While focused and animated on court, Alcaraz, who turned 19 on May 5, is poised beyond his years. He wasn’t even rattled when his luggage went missing when he returned home to Spain from Miami. In Monte Carlo, he moved across a line of television cameras, offering similar quotes to each. And he never stopped smiling.

The following conversation has been edited and condensed.

You’ve been compared to Nadal, Roger Federer, Pete Sampras and Andre Agassi. Which means the most to you?

Obviously Rafa. He’s Spanish, I grew up watching his matches, and he was my idol since I was a kid.

We’ve seen others described as the new Nadal who couldn’t handle the pressure. How are you holding up?

Everybody knows who is Rafa and what he has achieved in tennis, so I’m trying not to think that I’m the new Nadal. I’m just trying to be Carlos Alcaraz. If I make pressure on myself trying to be Rafa Nadal and win 21 Grand Slams, it’s really tough, and in the end it’s dangerous to myself.

Last year you said your goal was to make the top 20, and you’ve already surpassed that. What’s next?

At the end of last year I said my goal was to win an ATP 500, then a Masters 1000. I did both of those, so now I’m trying to win a Grand Slam and qualify for the ATP Finals.

Your coach, Juan Carlos Ferrero, told you not to be in a rush to get to the top. You haven’t listened. What is he telling you now?

He’s telling me to stay calm, to do the things that I already do, to follow my way. Don’t think about this tournament or the top five. Just stay level and be the same person that I’ve been this past year.

You and Iga Swiatek, the new women’s No. 1, have both had great success at a young age. Have you talked to her?

Not really. I wrote to congratulate her after she won the Miami Open, but she didn’t respond. I don’t have her number, so I wrote on Instagram. I think she received a million messages.

I don’t know if you’ve seen “King Richard,” the biopic about the father of Venus and Serena Williams, but who would you like to play you in the Carlos Alcaraz story?

I haven’t seen the movie yet, but [Leonardo] DiCaprio.