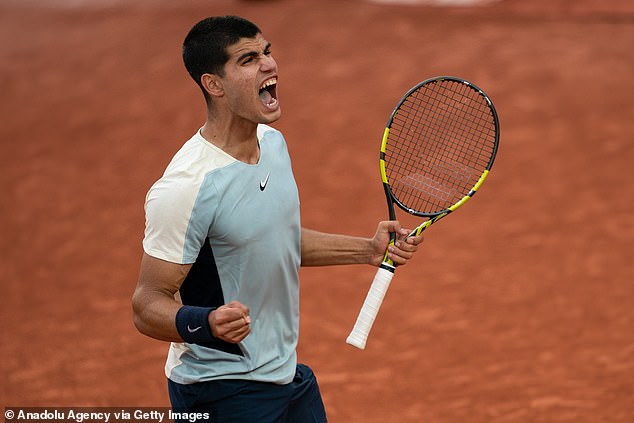 By Matthew Lambert for the Daily Mail

In a spectacular match that was an echo of his first on tour, 19-year-old sensation Carlos Alcaraz showed both how far he has come and how much he still has to learn.

The teenager’s rise has been stratospheric, so much so that he arrived at the French Open as sixth seed and second favourite for the title. So when Ramos-Vinolas served for the match in the fourth set and then took a 3-0 lead in the fifth, it felt like the first real bump in Alcaraz’s road to superstardom.

How well he responded though, saving a match point and then launching a thrilling comeback. The winner he hit to break back in the fifth set, sprinting and sliding the length of the court to thread a backhand down the line, was remarkable.

Despite that, there were negatives. Alcaraz plays with frenetic speed and intensity but it felt he was rushing at times. He has an ability to electrify a crowd though and they carried him to victory.

The only man to beat him on clay this year — the USA’s Sebastian Korda — awaits in the next round.

There was trouble, too, for No 3 seed Alex Zverev, who had to battle from two sets down against Argentine Sebastian Baez. If they meet, as expected, in the last eight, Alcaraz and Zverev must find their ruthless streak again.