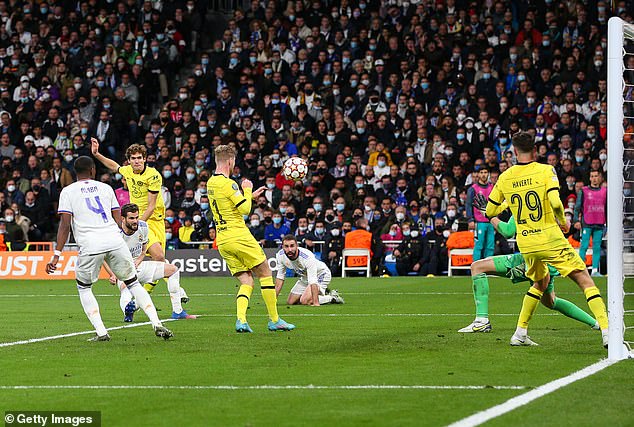 ‘This handball rule…’: Ben Chilwell hits out at VAR decision to rule out Marcos Alonso’s goal in Chelsea’s heartbreaking Champions League loss to Real Madrid, as fans say Thomas Tuchel’s men were ‘ROBBED’ at the Bernabeu

Chelsea fans were left heartbroken after VAR cruelly ruled out Marcos Alonso’s thumping effort, as they crashed out of the Champions League 5-4 on aggregate.

The Blues were trailing 3-1 from the first-leg at Stamford Bridge, but Thomas Tuchel’s side put on a Champions League masterclass at the Bernabeu as Mason Mount and Antonio Rudiger scored early in each half to level the tie on aggregate.

The west London outfit were in dreamland as Alonso notched a third in the 61st minute to give them a 3-0 lead, but VAR left them shattered and furious after claiming the Spaniard had handled the ball in the build-up in a major reprieve for Los Blancos. 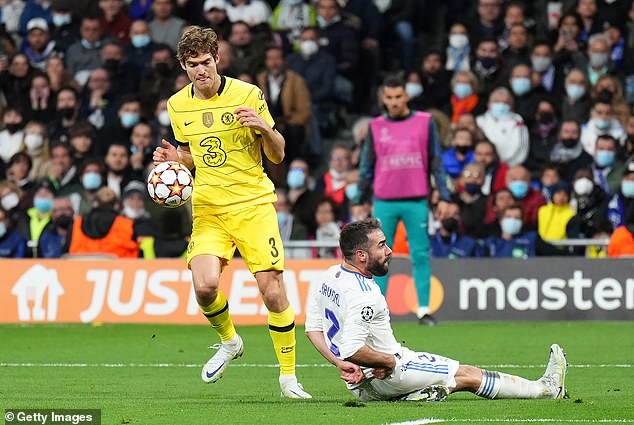 The Blues thought they had made it 3-0, only for it to be disallowed for a handball on Alonso

The wing-back’s initial effort was blocked by Dani Carvajal, but as the ball ricocheted off Carvajal it clattered into Alonso’s hip, grazing his hand in the process.

The former Bolton Wanderers man thumped the ball into the top corner with his weaker right foot before charging off to celebrate – only to be devastated to see it ruled out.

With the goal ruled out the score was reverted back to 2-0 and 3-3 on aggregate. 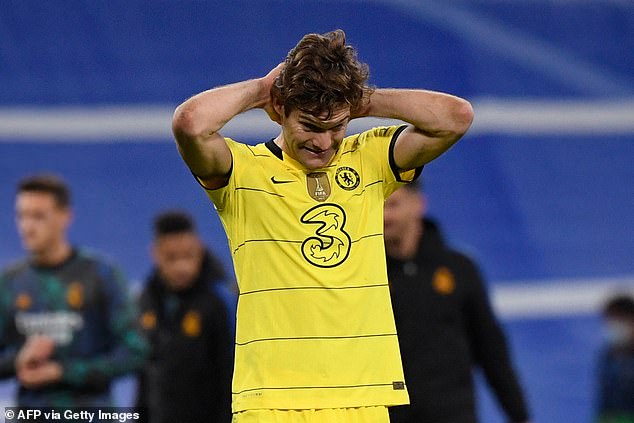 Team-mate Ben Chilwell has bemoaned the hand ball law after Marcus Alonso was denied a stunning goal in the second leg of his side’s quarter-final tie.

The injured left-back took to social media to express his frustration at the decision, as he tweeted: ‘This hand ball rule…’

Blues forward Timo Werner did make it 3-0 shortly after on the night to put them back in front.

Real looked dead and buried only for there to be another twist in the tale as Rodrygo snatched a goal out of nowhere to once again bring the tie level at four-apiece.

Luka Modric played the pass of the night to Rodrygo, hit with the outside of his boot with stunning accuracy.

The substitute met it on the volley at the far post to bring Madrid back to life.

Karim Benzema took advantage of a Antonio Rudiger slip to head Real into the lead and send them on their way to the Champions League semi-finals.

Fans were also fuming along with Chilwell after the goal was ruled out as they felt it was very harsh.

One fan said: ‘Very harsh, I’m not sure the rule was designed for accidental handballs like that it was made to prevent someone putting the ball into the net with the hand directly these should stand.

A second said: ‘I don’t like Chelsea’s but they have been robbed in broad day light. How is that a handball, hand well tucked into his body.

A third added: ‘You know it should have been given, when the other team don’t complain.’

Plenty of fans agreed and understood the controversial decision in the 61st minute of the contest.

A fan said: ‘Touching the ball with his hands gave him an advantage. Watch it well, there is no way he gains control of the ball without the help of his hands. Fair.

Another stated: ‘The law clearly states it’s a foul if the goal scorer handles the ball, so it obviously shouldn’t stand.’