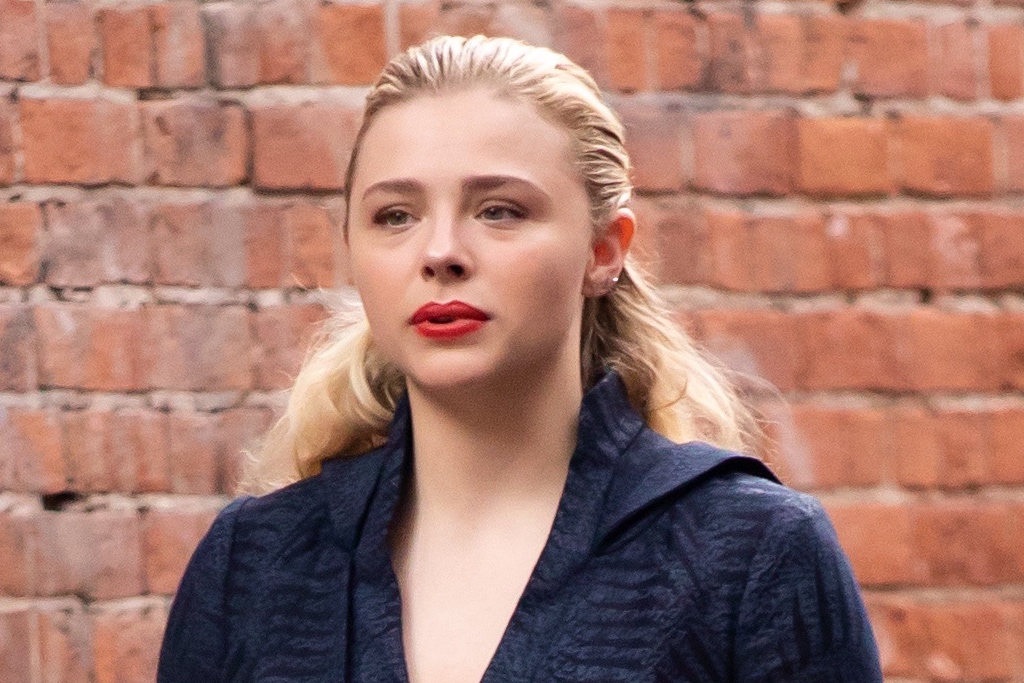 Chloë Grace Moretz brought slick style to the set of her latest project, the Amazon sci-fi series “The Ballad of Ruby Salem.”

While filming the show with Gary Carr in New York City’s Lower East Side neighborhood, Moretz wore a long-sleeved navy top with a deep paneled neckline. Adding further dimension to the piece was a large front panel that created a layered silhouette, cinched with a knotted black leather belt. Completing the “Dark Shadows” star’s modern ensemble was a pair of slim-fitting navy trousers, which included small side splits on their hems. The star’s only additional accessory was a set of gold stud earrings.

When it came to shoes, the “Equalizer” actress completed her ensemble with a pair of classic boots. Her black leather style featured rounded almond-shaped toes, as well as thick cylindrical heels totaling at least 3 inches in height. The pair further streamlined her outfit by coordinating with its dark tones and matching her belt’s texture, while remaining utterly versatile and sleek.

Boots like Moretz’s are a wardrobe staple, due to their versatile tone, walkable silhouette and ability to be worn with a range of ensembles. Pairs with block heels in leather and suede textures are the most popular, as seen in new styles from The Kooples, Thursday Boot Co. and Sam Edelman. Aside from Moretz, stars including Dixie D’Amelio, Princess Eugenie and Chiara Ferragni have also slipped on sharp Princess Polly, Jimmy Choo and The Row boots in recent weeks.

Moretz is a mainstay in the fashion industry, having served as a campaign star, Met Gala date and front row fixture for brands including Coach, Louis Vuitton and Aeropostale over the years. When it comes to red carpets, she’s been spotted in numerous pointed-toe, platform and open-toed pumps and heeled sandals from luxury brand including Sergio Rossi, Jimmy Choo and Saint Laurent. As a longtime Vuitton ambassador, Moretz frequently wears the brand’s boots and loafers when off-duty. However, her casual ensembles also feature a range of styles, including Balenciaga pumps, Charlotte Olympia flats and Soludos espadrilles — plus sneakers by Converse, Reebok and Nike.

Discover Moretz’s top shoe moments over the years in the gallery.