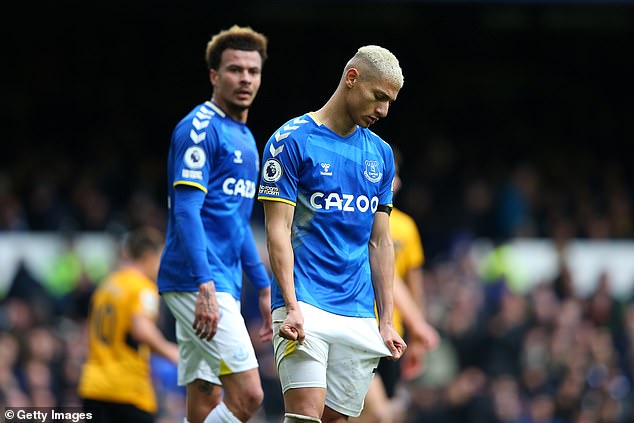 As the Premier League heads into the final stretch of the season, the relegation battle is heating up with just 13 points between 15th place and 20th.

Brentford look as though they should be safe, while the pressure remains on Leeds United and Everton, who sit just outside of the drop zone.

Burnley, Watford and Norwich City are the teams currently going down but all three have been picking up results of late, which could make it an interesting end to the campaign.

Sportsmail looks at all of the relegation candidates.

THE GOOD NEWS – Christian Eriksen’s arrival has not only added creativity to Brentford’s play. It’s given the entire club a lift, and Brentford are in a good place.

Back-to-back wins against direct relegation rivals in Norwich then Burnley were season defining. It helps they have the world’s best penalty taker in Ivan Toney.

Now they need, what, six points to realistically be able to say they’re safe? I’m sure they’ll get that and then some. 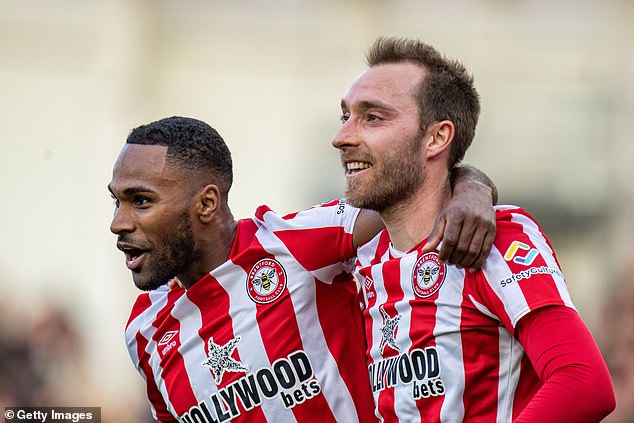 Christian Eriksen’s arrival at Brentford has not only added creativity, but given the club a lift

THE BAD NEWS – They’re inexperienced. Brentford have never been here before. But then I’m not telling them anything they didn’t know at the start of the season. Thomas Frank has frequently described his club as a ‘bus stop in Hounslow’.

I’ll be honest – my pre-season predictions had this ‘bus stop’ getting flattened. But Brentford have been brave, a third of their goals have come from set pieces, and they’re in an envious position now.

WHERE I THINK THEY’LL FINISH – 15th

THE GOOD NEWS – The scenes at the end of Sunday’s game at Elland Road really were something.

When you strip it all back, they worryingly relied on a 94th-minute winner to beat a struggling Norwich side at home. But ultimately, they secured three priceless points.

Jesse Marsch is full on, authentic, up front, and fans can get on board with that. It’s good for Leeds that Patrick Bamford is back. 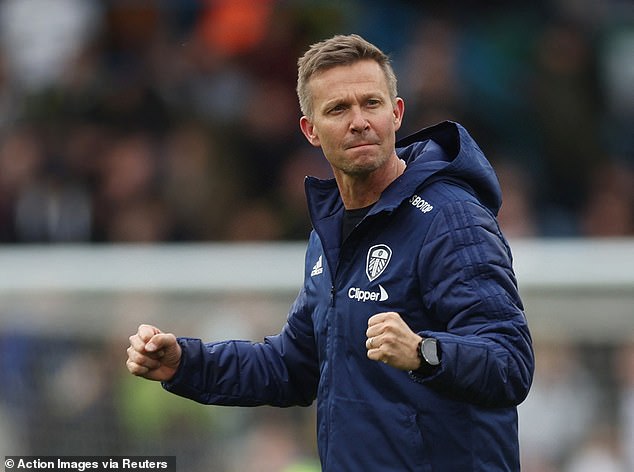 He looked a little rusty against Norwich but that was only natural for his first start since September. With Bamford, there’s Raphinha, Daniel James, Joe Gelhardt and more.

Leeds are well stocked in attackers who can score the goals they need to win them games, unlike some of their rivals.

THE BAD NEWS – They’ve got the worst defence in the Premier League. It’s now 104 days since Leeds last kept a clean sheet and that was in a 1-0 win over Crystal Palace on November 30, back when life without Marcelo Bielsa wasn’t even a consideration. They concede soft goals, Leeds.

Even at 2-1 against Norwich, Teemu Pukki should have scored at the death after being set up by his goalkeeper Tim Krul. That summed Leeds up, which is worrying.

WHERE I THINK THEY’LL FINISH – 16th

THE GOOD NEWS – They’re a team packed with talents. The XI that lost to Wolves was made up of internationals from all around the world, including an incredibly talented Brazilian in Richarlison, and they’ve got a promising manager in Frank Lampard.

On paper, therefore, they’re a solid side. The trouble is on grass, they’ve been rubbish. I fear Everton are heading to the Championship.

The other good news for their fans is my other predictions haven’t been the best! 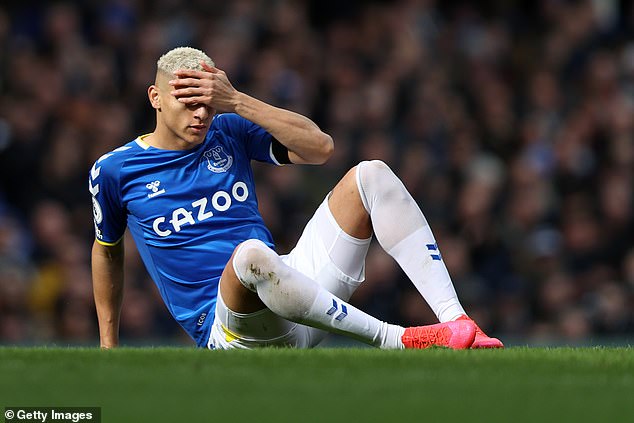 Fans fear that Everton are heading for the Championship, despite having international stars

THE BAD NEWS – Everton have the worst away record in the Premier League. That’s a major concern and they’ve still got to go to Burnley, Watford, West Ham, Liverpool, Leicester and Arsenal. I’m really worried about Everton.

It’s not only that they’re losing games. It’s the manner in which they’re losing them. They’re so low on confidence and almost feeling sorry for themselves.

We all assumed Everton would get out of this mess because, well, they’re Everton football club. But if we base it on what we’ve seen of them in fixtures so far, they’re on their way out of the Premier League.

WHERE I THINK THEY’LL FINISH – 18th

THE GOOD NEWS – Watford’s fixture list suggests it’s in their hands. Everton, Leeds, Burnley and Brentford – teams in their vicinity – all have to come to Vicarage Road.

Roy Hodgson knows each and every one of those games represents six-pointers and he’s got a few good goalscorers, chief among them Emmanuel Dennis, who can do damage.

Watford would have gone down with a whimper under Claudio Ranieri but Hodgson, being the organiser that he is, has given them a fighting chance. 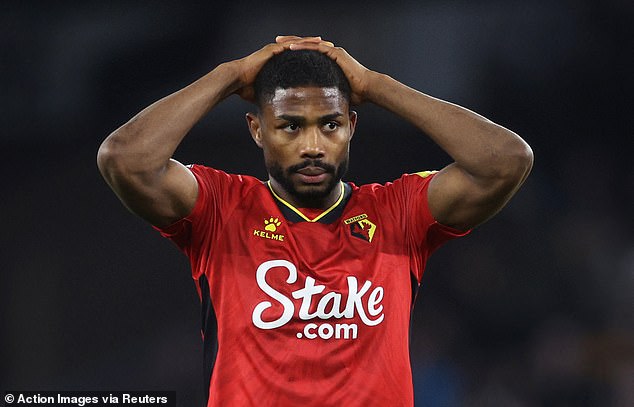 THE BAD NEWS – Saying that, we could say it’s bad that those games are at home! A Premier League table consisting of home fixtures only places Watford rock bottom.

They’ve won two, drawn one and lost 11 of their 14 games in Hertfordshire this season. This is such a Jekyll and Hyde team.

They need consistency now more than ever and I’m not sure they’ll find it in time to keep themselves up. That’s why I’ve predicted they’ll be dropping down.

WHERE I THINK THEY’LL FINISH – 19th

THE GOOD NEWS – Sean Dyche has always felt like a safe pair of hands. In terms of being there, done that, got the T-shirt, he’s the man.

Burnley are battle-hardened. They know what it takes and, especially from what I saw of them earlier in the season, they haven’t always got the points their performances deserved.

Something in my gut tells me they’ll get themselves out of this jam. 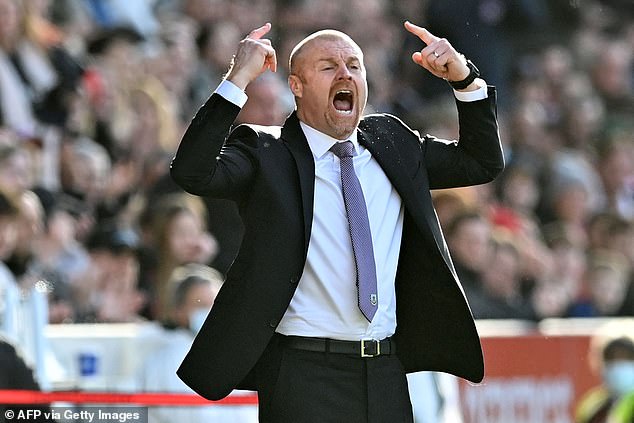 THE BAD NEWS – Goals win you games, and that’s been a problem for Burnley.. They’ve lost their last three fixtures all without scoring.

Chris Wood was sold to Newcastle for £25m and that was a blow. Wout Weghorst came in but hasn’t discovered where the goal is.

WHERE I THINK THEY’LL FINISH – 17th

THE GOOD NEWS – The Norwich model is a good one. It’s self-sustainable which means, although they can’t afford to splash £50million on a midfielder, they aren’t in danger of financial ruin or reliant on a Russian billionaire.

Look, the table doesn’t look good. They’re five points from safety, and there are 27 left to play for, so they’ve just got to go again.

If they are relegated, Dean Smith is a terrific coach more than capable of getting Norwich out of the Championship like he did with Aston Villa. 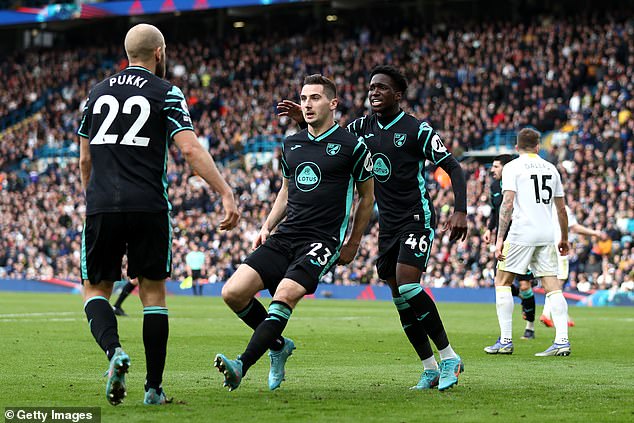 Norwich City look set to be relegated, but do not have to worry about financial ruin

THE BAD NEWS – I’ve always tried to remain optimistic with Norwich. Every time I’ve been asked to predict the bottom three, I’ve had them staying up! Not now. Now I have to face up to reality.

Why couldn’t they break the yo-yo cycle? I blame the recruitment. They spent £10m on Christos Tzolis but he’s appearing for the Under 23s.

Ben Gibson was the culprit who lost a header to 5ft 9in Gelhardt as Leeds won.

Ultimately, with a heavy heart, it doesn’t look like Norwich have got the players to remain a Premier League club.

WHERE I THINK THEY’LL FINISH – 20th