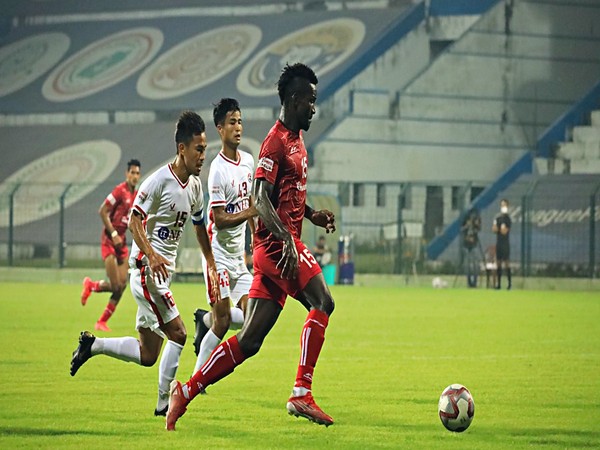 With this, they have moved up to the 8th spot in the standings while Aizawl FC have slipped down to the 10th position. Kenneth Ikechukwu and Komron Tursunov scored one goal each for Churchill Brothers while Samuel Lalmuanpuia netted the consolation goal for Aizawl FC. Churchill Brothers started the match on a high note as they put pressure on their opponents by creating their first chance of the match as early as in the second minute. After a strategic counter-attack, Komron Tursunov was given the opportunity to put them ahead but his chip went wide the mark.

Their second big chance came in the 10th minute when Guinean striker Sekou Sylla tried to put the cross in the box but Aizawl FC goalkeeper Anuj Kumar came off the line and grabbed the ball. Komron Tursunov came close to netting the first goal of the match in the 21st minute but was it saved by Anuj Kumar.

Sekou Sylla tried his luck again in the 28th minute but Anuj Kumar stretched his body and was successful in blocking the goal.

I-League 2022: The Red Machines upped their ante at the end of the first half as Bryce Miranda created yet another chance in the 42nd minute. But, their counter-attacking opportunity was wasted as the ball had too much pace and the home team players failed in collecting the ball.

However, just a minute later, their efforts paid off as Kenneth Ikechukwu broke the deadlock through a header after a cross from Bryce Miranda. Churchill Brothers doubled their lead in first-half stoppage time and this time it was through Komron Tursunov.

Kenneth Ikechukwu was the one who provided the assist.

I-League 2022: Aizawl FC started the second half with high intensity and it was clear that they were not ready to go down without a fight. Dipanda Dicka almost pulled one back for his side in the 50th minute but solid defending by his opponents did not allow him to finish.

Aizawl FC made their first substitution in the 58th minute as David Zate walked out to make way for Willis Plaza.

Aizawl’s efforts paid off as they pulled one back in the 59th minute, courtesy a direct free-kick goal from their captain Samuel Lalmuanpuia.

Thereafter, the People’s Club increased their effort as they tried their hardest to score an equalizer, but, were not successful. Shilton Paul, the No. 1 goalkeeper of Churchill Brothers FC Goa, had a brilliant game in terms of blocking the ball as well as his distribution from the goal-kick.

Aizawl did not stop trying for an equaliser until the end but Churchill Brothers held on to record just their second victory of the campaign.