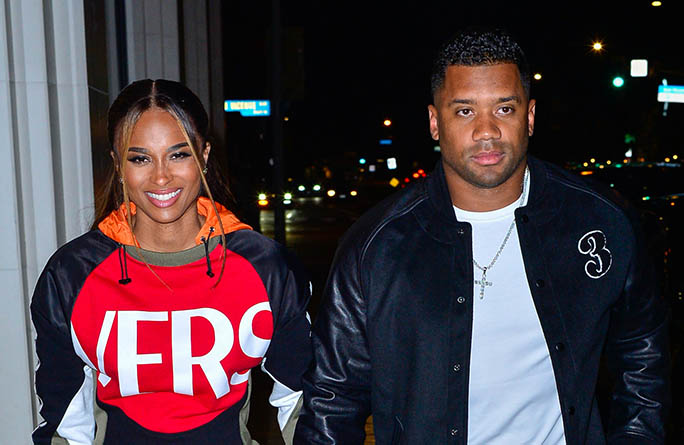 Russell Wilson was introduced as the new quarterback for the Denver Broncos on Wednesday with his wife Ciara and their kids by his side. The nine-time Pro Bowl quarterback was recently traded to the Broncos after 10 years with the Seattle Seahawks. The official Instagram account for the Denver Broncos took to Instagram to share a photo of Wilson and Ciara proudly holding up his new orange jersey.

“King and Queen #BroncosCountry,” the football franchise wrote under the upload.

To commemorate the moment, Ciara added her own personal flair to the power suit trend. The “Goodies” songstress embraced the new team aesthetic by sporting a vibrant orange pant suit from David Koma. Ciara’s radiant look consisted of a blazer that offered a tailored silhouette, structured shoulders and sharp peak lapels that frame the face.

She wore the jacket over a white top. To ground everything, the “Level Up” hitmaker tied her look together with matching orange pants. The bottoms offered a bell bottoms feel due to the high waist and slightly flared leg. To really let her outfit do all of the talking, she styled her signature caramel tresses straight and opted for soft neutral makeup.

The length of her pants allowed for a peek at her footwear, which appeared to be a pointy silhouette. The shoe style is a go-to for many celebrities as it offers versatility and a streamlined finish.

Wilson looked dapper for the occasion by opting for a dark blue navy suit. He made sure to show his support for the new team by complementing his look with an orange tie. The power couple’s children Sierra Wilson and Win Wilson were also dressed in the teams colors, orange and blue. Sierra wore a sleeveless orange dress, while Win shared an adorable twinning moment with his dad. Ciara’s eldest son Future, whom she shares with rapper Future, was sharply suited with an orange pocket handkerchief.

Click through the gallery to see Ciara’s style evolution over the years.